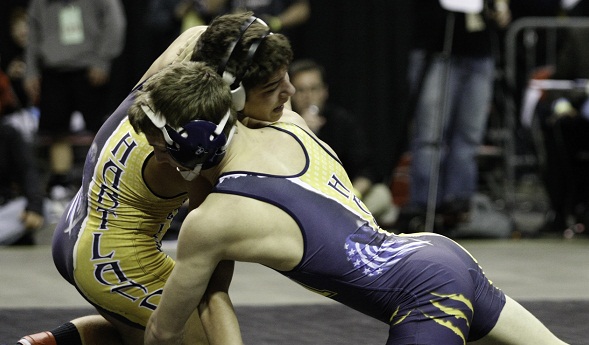 AUBURN HILLS — It was a surreal scene at the edge of the mat when Austin Eicher and Jacob Gorial met for the 130-pound title in the MHSAA Division 1 wrestling tournament Saturday at The Palace.

Coaches can often get quite animated when their wrestlers are going for a championship. But the coaches in Eicher's and Gorial's corners sat quietly in their chairs, occasionally smiling as they took in the action as passive observers. One coach even got up to grab a cup of water while the match was in progress.

None of the four coaches watching matside was taking sides, not when both competing wrestlers wore the blue and gold of Hartland High School.

"We're both teammates," Gorial said. "It would've been unfair."

In only the sixth MHSAA championship match involving teammates, Eicher won a 5-0 decision over Gorial.

Eicher, a junior who finished 52-1, was the 119-pound runner-up last season. The teammates never met this season, with Eicher winning the District and Regional finals over Gorial by injury default.

"It was definitely different," Eicher said. "He's one of my best friends. We both wanted it. We've been working hard this whole year. It was both of our goals to win the state championship. I took something away from him, but I wasn't going to let him take it away from me.

"Once we're out there, we're just wrestling. We know we're friends before the match when we're warming up, but once we're wrestling, it's go time."

Gorial, a sophomore who finished 56-5, credited Eicher for making him a better wrestler in practice.

"I'm glad Austin won," Gorial said. "He worked hard. If it wasn't for him, I wouldn't be here right now."

Click for full results, and read below for recaps of each championship match and comments from all the winners.

Coe had a tougher battle this year against Tillman, but still prevailed to win the championship. Coe pinned Tillman at the 2:16 mark in a first-round match in last year's MHSAA Final.

Coe used an escape to break a 0-0 stalemate with less than 30 seconds remaining in the match.

"I was a little nervous at the beginning of the match," Coe said. "He came out really strong. He's bigger than I remember. I pinned him last year here. He got better this year."

Gomez got his only pin in four matches at The Palace in the championship, but he was nonetheless dominant with two majority decisions and a 9-3 victory before the final.

"It's still kind of hard to believe," Gomez said. "I had a lot of close matches this year, in and out of state. I grew and basically just competed all summer, no breaks, and pushed myself to get to this level."

Olson held up two fingers toward the Davison cheering section after adding this year's 112 title to the 103-pound crown he won as a freshman.

He did so by handing Gillies his only loss in 56 matches this season. Olson also beat Gillies in the quarterfinals last year.

"Last season, I kind of shocked the world," Olson said. "No one knew me. Not much was expected of me. This year, they knew who I am. A lot of kids were content just getting beat by a few points."

Wireman's victory gave him a 2-2 career record against Rogaliner in a rivalry that always seems to take place on a big stage.

Wireman beat Rogaliner 2-1 in the 103-pound final in 2011 before Rogaliner got revenge with a third-period pin in the 112-pound semifinals last year.

"It's always a fun match against him," Wireman said. "We're 2-2 against each other. We've dominated this weight class. We know each other very well."

Wireman will wrestle at Eastern Michigan, while Rogaliner is heading to Michigan State. "So we'll probably meet each other again," Wireman said.

Henderson won three of his four matches at The Palace by two points or fewer to pull the upset.

Rodriquez beat Henderson by seven points in the Regional final to take an unbeaten record to The Palace.

"My brother looked on (Michigan) Grappler and said I wasn't favored to win at all," Henderson said. "I didn't think anything of it. He told me midway through. I'd already won twice. People were just speaking
wisdom and God's word to me. That gave me confidence."

A point awarded for stalling sent this match to overtime, and another awarded for grabbing head gear decided the title winner.

"There's no way you can prepare for that, except coach telling us throughout the year that you have to stay composed, you have to keep your cool," Bade said. "I stayed composed and was ready to go and went back on the line."

Amine lost 9-6 to Alex Pantaleo of Canton in last year's 135-pound final, a loss that fueled the Catholic Central junior for the past 12 months.

Most high school wrestlers don't drop a weight class the following season, but Mann did so successfully.

Mann was fourth at 152 pounds last year before winning the 145 title on Saturday. Two of Mann's three losses were to Livonia Franklin's Jordan Atienza, the 152-pound runner-up.

"It's the greatest feeling ever," Mann said. "I've been training for this since I was 4 years old. I finally got it my senior year."

Vandermeer averted disaster and turned it into a championship, rolling out of a near-pin to record a pin of his own against the previously-unbeaten Atienza.

"I almost felt myself getting pinned," Vandermeer said. "I was warned he throws with his upper body. I didn't expect to be rolling. I had to get out, but I was able to re-roll him and catch him pretty much."

Vandermeer joined his brother, Matt, as MHSAA champions. Matt was the 171-pound champion in 2011.

Cooks beat Marcicki for the second straight week to repeat as 160-pound champion.

Cooks scored a 5-3 decision over Marcicki in the team championship match, one that Catholic Central ultimately won.

"It feels amazing," Cooks said. "It feels a lot better than the first one. It means a lot, being my second one."

Garcia brought big-time experience to The Palace, having also finished as the 152-pound runner-up in 2011. Thomas gave Garcia one of his tougher matches in a perfect junior campaign.

"He was good," Garcia said. "I wrestled him early in the year. He was one of the only kids who didn't gas in the third period, so I knew I'd have to wrestle a full six minutes. He's a tough kid."

Shadaia became only the second Rochester wrestler to win an MHSAA title when he broke a 3-3 tie with an escape in the final seconds. Calvano had tied the match moments earlier.

"We drill these kinds of situations in practice all the time – 20 seconds, 15 seconds to win the state championship," Shadaia said. "That's what I took it as - another practice."

Rochester's only other champion was Shane Camera, a Class A winner in 1987 and 1989.

"It was crazy," Sunday said. "I just wrestled that kid in the team Regionals and individual Regionals. It was close every single time, two or less points. Definitely, he's my toughest opponent this year.
He's only a junior. He wrestles like he's in college."