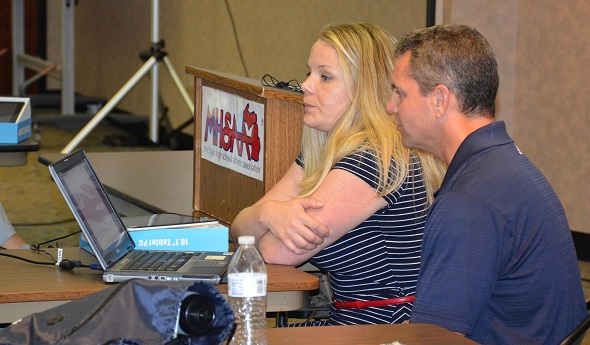 The Michigan High School Athletic Association kicked off the 2015-16 school year Monday by hosting 70 member high schools for training in two pilot sideline concussion testing programs aimed at assisting in decision-making regarding the removal of athletes from activity after possible concussion events and record-keeping of those events beginning this fall.

Illinois-based King-Devick Test and Maryland-based XLNTbrain Sport each will be used to monitor approximately 10,000 Michigan high school student-athletes drawn from schools representing all four classes and a variety of regions statewide.

The pilot programs are part of a three-pronged advance by the MHSAA in concussion care this fall. In addition to becoming the first state association to offer pilot sideline concussion testing, the MHSAA will be the first to mandate record-keeping by member schools of all possible concussion events from detection to an athlete’s return to play. The requirement applies to both practices and events, all levels of all sports in grades 7 through 12.

The MHSAA also this fall is the first state association to provide all participants at every MHSAA member high school and junior high/middle school with insurance intended to pay accident medical expense benefits – covering deductibles and co-pays left unpaid by other policies – resulting from concussions sustained during MHSAA practices or competitions. There is no cost to either schools or families.

“These pilot programs are intended to not only improve what’s actually happening on the sidelines at practices and contests in these communities that are part of the pilot programs, they’re intended to spread the word of the need for improved concussion detection across every community,” MHSAA Executive Director John E. “Jack” Roberts said. “We hope these schools involved will become involved in their leagues and conferences and with their peers across the state as we expand the awareness of the need for better sideline detection and provide ways to get it done.”

The MHSAA asked schools at the end of this spring to volunteer for the pilot programs and then selected participants in order to guarantee a variety of schools based on enrollment and location. Schools are committed to involving at least two sports for each gender each season.

The King-Devick Test is a rapid eye movement screening evaluation that requires athletes to read single-digit numbers displayed on a tablet computer in order to detect impairments of eye movement, attention, language, concentration and other symptoms of abnormal brain function. The test has been validated in more than 50 recent peer reviewed articles published in elite medical journals and is associated with the Mayo Clinic.

The test is administered on the sidelines during evaluations for suspected head injuries, and the post-injury results are then compared to an athlete’s preseason baseline. Any worsening of performance (increased time and/or errors) suggests a concussion has occurred and the athlete should be “removed from play” for further evaluation.

“The first and most critical step in managing concussion in the youth athlete is to recognize when one has occurred – not always a simple task,” said Dr. David Dodick, professor of neurology and director of sports concussion services at the Mayo Clinic. “The King-Devick test helps take the guesswork and subjectivity out of the sideline evaluation in a rapid, accurate, and objective way.” 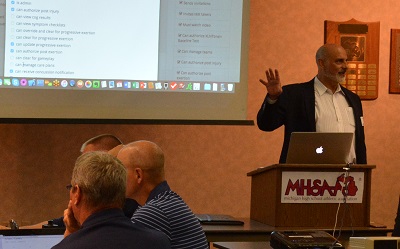 After a possible head injury, a sideline assessment is done using a smartphone or tablet with those results then compared with the athlete’s baseline measurements. The program documents the severity of a concussion, provides a guide for on-the-field decision making regarding treatment and recovery time and can report results via email to parents, coaches, training staff and medical professionals.

Dr. Harry Kerasidis, who designed the XLNTbrain Sport software, presented at the Coalition for Concussion Treatment Summit at the United Nations building in 2014.

“We included an objective balance test that relies on smartphone accelerometer technology which is effective in the field during practice and game situations,” Kerasidis said. “Should a concussion injury be suspected, the system automatically generates a notification to parents and medical professionals and creates a recovery protocol and post-injury tracking so the right people can monitor the athlete’s progress. Then, the system assists medical professionals with the all-important return-to-learn and return-to-play clearance.”