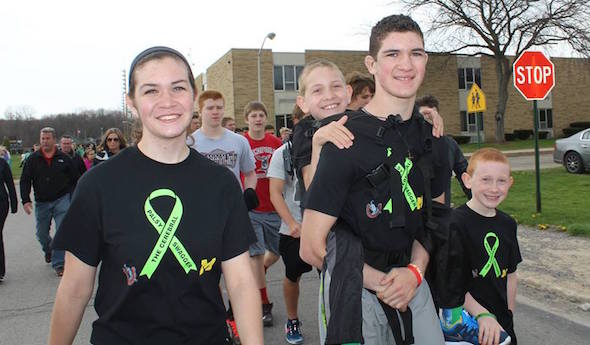 By John Gillis
Special from NFHS

Hunter Gandee, a student-athlete at Temperance Bedford High School, has been selected as the 2017 Section 4 recipient of the “National High School Spirit of Sport Award” by the National Federation of State High School Associations (NFHS).

The National High School Spirit of Sport Award was created by the NFHS to recognize those individuals who exemplify the ideals of the spirit of sport that represent the core mission of education-based athletics.

The mark of a “good big brother” is often to what lengths he might go to assist his younger siblings.

That sense of familial assistance has perhaps never been taken to the extremes that Hunter Gandee has repeatedly done for his younger brother Braden.

A standout student, Hunter is a junior with a 3.92 grade-point average and a member of the National Honor Society.

On the sports side, Hunter is in his third season on the varsity wrestling team, and participates in Greco-Roman and freestyle wrestling during the offseason. He's also a member of the MHSAA Student Advisory Council.

While those accomplishments are unquestionably outstanding, they might pale in comparison to what he has done for Braden.

Born with cerebral palsy, Braden has limited use of his legs. Nonetheless, Hunter has taken it upon himself to help Braden know what it feels like to walk long distances – and he’s done it three times. Organized for the purpose of raising awareness of cerebral palsy, Hunter literally carries Braden on his back for long walks known as “CP Swaggers.”

In 2014, Hunter carried Braden 40 miles from the Bedford Junior High School wrestling room to the University of Michigan’s Bahna Wrestling Center. The following year, they upped the trek’s mileage to 57 miles.

However, that couldn’t foreshadow what was to follow in April 2016 when Hunter carried Braden on his back an amazing 111 miles – some 14 miles more than the first two walks combined.

About the Award: The NFHS divides the nation into eight geographical sections. The states in Section 4 are Michigan, Illinois, Indiana, Iowa and Wisconsin.

Nominations for this award were generated through NFHS member state associations and reviewed by the NFHS Spirit of Sport Award Selection Committee composed of state association staff members.

While the national winner will be recognized June 29 at the NFHS Summer Meeting in Providence, Rhode Island, the section winners will be recognized within their respective states and will receive awards before the end of the current school year.

PHOTO: Hunter Gandee, second from right, carries his brother Braden as part of their effort to bring awareness to cerebral palsy. (Photo courtesy of The Cerebral Palsy Swagger.)