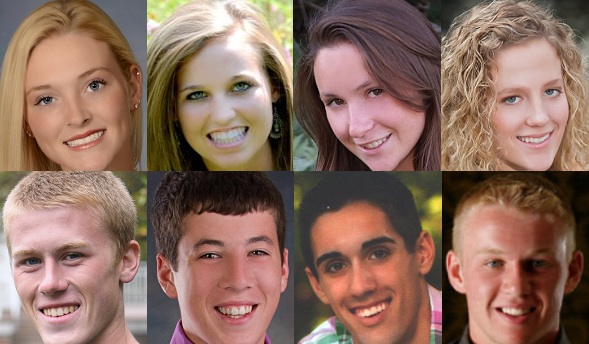 The Michigan High School Athletic Association has selected eight student-athletes from Class B member schools to receive scholarships through its Scholar-Athlete Award program.

Farm Bureau Insurance, in its 24th year of sponsoring the award, will give a $1,000 college scholarship to 32 individuals who represent their member school in at least one sport in which the Association sponsors a postseason tournament. The first 30 scholarships are awarded proportionately by school classification and the number of student-athletes involved in those classes; also, there are two at-large honorees which can come from any classification.

Each scholarship recipient will be honored during a halftime ceremony at the Class C Boys Basketball Final game March 23 at the Breslin Student Events Center in East Lansing. Commemorative medallions will be given to other finalists in recognition of their accomplishments.

Overviews of the scholarship recipients of the Class B Scholar-Athlete Award follow. A quote from each recipient's essay also is included:

Ashley M. Carney, Jackson Northwest.   Will finish high school career earning four letters each in golf, volleyball and tennis.  Helped golf team to four MHSAA Finals, and medaled at her conference meet as a senior.  All-area, all-conference and a team captain in golf and volleyball.  Was team most valuable in volleyball last fall.  Academic all-state in all three sports.  Helped coordinate a basketball shooting fundraiser for American Cancer Society; and volunteered with Habitat For Humanity, the Jackson Interfaith Shelter and the Salvation Army.  Also active in National Honor Society, student government and as an elementary school tutor.  Plans to attend Siena Heights University and study sports management.

Essay Quote:  “I have experienced many life lessons through sports that will carry me farther in life than any win or loss.  The qualities and character that spectators, opponents and coaches remember me by are everlasting.  We may not all be ‘winners’ reflected by the final score, but we can all be ‘winners’ measured by our attitude, respect for opponents, and respect for the game.”

Amanda Ciancio, Comstock Park.  A standout in cross country, serving as team captain and earning all-conference and team most valuable as a junior and senior.  Also lettered in basketball and softball, winning all-district in the latter sport.  Participated in student leadership activities and served as class president each year of high school.  Involved all four years as a camp counselor; a youth basketball volunteer game official, coach and scorekeeper; and as a volunteer for various elementary school activities.  Member of National Honor Society, attendant at church nursery and helped plan school dances.  College plans includes studies in math and accounting.

Essay Quote:  “Players and coaches can both teach and preach sportsmanship, but before every game or competition, it is up to the athlete to determine whether they will participate for the glory or for the experience.”

Mary Emington, Cadillac.  Participated in basketball and softball, earning all-area and all-conference in both sports.  Honored twice in each activity with local scholar-athlete award.  Captained softball squad the past two seasons, and was team most valuable as a sophomore.  Led hoop squad in assists as a sophomore and junior.  Served on class and student council; was president of class council as a sophomore and treasurer as a senior.  Involved with Art activities, and took part in annual “Be The Change Team” at school, which inspires positive action and connection with others.  Four-year member of church youth group.  Will attend Calvin College and major in architecture or communications.

Essay Quote:  “During physical exertion, blood and emotions run rapidly. Only through the very delicate balance of love for the game and sportsmanship do the matches continue.”

Nicole L. Green, Portland.  Will win her fourth letter in soccer this spring to go with three letters in basketball and two in volleyball.  A team captain in all three sports, including three years in soccer.   Team most valuable in soccer and volleyball, and earned first team all-conference and academic all-state honors in both sports.  Academic all-conference in all three activities.  Helped organize fundraisers in all three sports for American Cancer Society.  Selected school Citizen of the Year by Daughters of the American Revolution.  Participant in Academic Letters, Captain’s Club and National Honor Society.  Volunteer for local youth basketball and volleyball programs.  College plans include studies in Zoology.

Essay Quote:  “Sportsmanship is important because student-athletes serve as influential role models for younger students.  As such, we must model respectful interaction, hard work, dedication, and a positive attitude.  Aspiring athletes need to see the positive impact these behaviors will have on the personal and team success.”

Alec Robert Fisher, Battle Creek Harper Creek.  Record-setting scorer for soccer and football teams.  Own school records for goal in soccer, as well as field goals and extra points on the gridiron.  Four-year letterwinner in soccer, where he was a team captain, all-state and academic all-state performer.  Also lettered in basketball and track, serving as team captain on the hoop squad.  Served on Student Senate as treasurer for four years.  Member of National Honor Society.  Helps with youth sports activities with school soccer and basketball camps, Special Olympics, and with the First Tee of Battle Creek.  Will study business or law at the University of Buffalo.

Essay Quote:  “We have been told the same thing since we were young kids playing in recreation leagues or with our friends, to now in competitive sports as highschoolers; always have sportsmanship.  It is one thing, win or lose, that can separate the young gentlemen and the jerks that care about nothing but winning.”

Patrick Gifford, Haslett.  Captained basketball and tennis teams, and has won academic all-conference honors in both sports.  Part of league and regional doubles winning tandem.  Class representative to Student Council all four years, and has participated in Key Club and National Honor Society.  Sports editor of school newspaper and announcer for its television station.  Honored by the Michigan Interscholastic Press Association and Michigan Association of Broadcasters for television sports play-by-play.  Serves as an in-class aide for autistic students in Peer–to-Peer program.  Involved in youth sports as a basketball coach and soccer official.  Received 69th District Citizenship Award.   Broadcast journalism studies await at either Ohio University, Syracuse University or the University of Missouri.

Essay Quote:  “As I prepare to graduate from high school and see my athletic career come to a close, I know I will take much more than the tennis and basketball skills I learned in high school with me.  The sportsmanship I have been coached to develop will help me move to this next state of my life and approach it with integrity, hard work, and leadership.”

Scott Parkinson, Grayling.  Will earn 10 varsity letters in athletic career in three sports – basketball, football and track – and serving as team captain in each activity.  Earned all-conference honors in football and track; won most improved award in basketball and track.  Conference champion in 110-meter hurdles in track.  Selected to an officer’s position on Student Senate all four years.  Seven-time winner of Mr. Spirit award as selected by teachers and chosen Most Athletic and Most Spirited by members of graduating class.  Four-year participant in Relay For Life and Youth Booster Club, and active with church youth group and local youth sports programs.  Will attend Michigan State University and study actuarial sciences.

Essay Quote:  “Having sportsmanship in educational athletics can teach life lessons and can also develop a person into a better and more-rounded athlete.  In turn, these lessons can be applied to future events in life.”

Keeton Thayer Ross, Grosse Ile.   Played baseball, basketball and football, and received all-conference honors on the diamond and the gridiron.  Also captained baseball and football teams.  Also academic all-state in baseball.  Earned the rank of Eagle Scout, served as vice president and president of school’s National Honor Society chapter, and as president of German Club.  Involved as student leader in school anti-bullying campaign and to help orient freshman class members.  Presented National Physical Education Award as a sophomore and has received an Ad Altari Dei Religious Medal.  Has served as a summer youth basketball camp counselor.  Planning on majoring in nuclear engineering and radiological sciences at either Georgia Tech or the University of California-Berkeley.

Essay Quote:  “My personal saying before each game is ‘It’s just a game.  Win or lose, life goes on.’ I believe that this saying has helped me to have great sportsmanship throughout my high school career by remembering the big picture behind the games.  Every team works their butts off to try and win games, and because of this, every team deserves respect from the opponent as well as its own team.”

The Class A honorees will be announced Feb. 19.