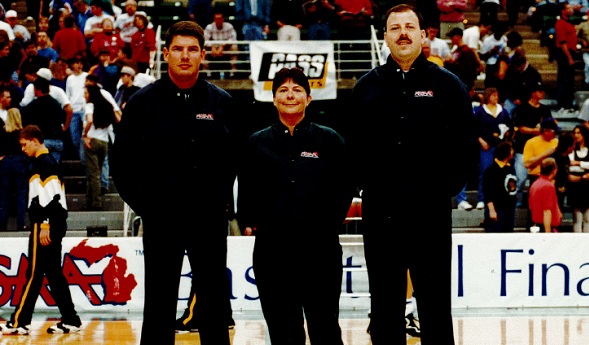 Barbara Beckett had an idea this was going to be big.

But until she arrived in East Lansing for the 1995 MHSAA Boys Basketball Finals, she had no idea how major a deal her next assignment would be.

Beckett had made the trip from Traverse City for Boys Finals weekend before, and officiated Semifinals two of the three previous seasons. But until that Saturday’s Class C Final between Ishpeming and Lakeview, no woman had ever officiated an MHSAA boys basketball championship game.

“I was pretty fearless. I was really, really driven to succeed,” Beckett said. “I was just so happy I got to be that person. It could’ve been a couple of other people. We had other women who were tremendous officials. I was very fortunate.”

Many who have worked with Beckett over the last three decades would claim the same. A 30-year MHSAA registered official, and the Grand Traverse Bay YMCA program director for the last 28, Beckett has left a long-lasting imprint on athletics not just in the northern Lower Peninsula, but statewide. She will be presented with the 26th MHSAA Women in Sports Leadership Award during halftime of the Girls Basketball Class A Final on March 16 at Michigan State University’s Breslin Center.

“Barbara Beckett is a demonstrated leader, evidenced by her previously being awarded the Norris Award for her efforts in recruiting and training officials,” said John E. “Jack” Roberts, executive director of the MHSAA. “In that regard, she’s a trailblazer for women in the officiating family, and her influence continues to be felt. We’re pleased to honor her with the Women In Sports Leadership Award.”

Each year, the Representative Council considers the achievements of women coaches, officials and athletic administrators affiliated with the MHSAA who show exemplary leadership capabilities and positive contributions to athletics.

Beckett worked with Donald Gustafson and Todd Geerlings on the crew that called the 1995 Class C Boys Basketball Final. But that wasn't her first experience reffing the guys.

On top of officiating games at lower levels of the MHSAA tournaments, she also had begun reffing rec league games at the Y during the early 1980s. That might’ve come as a shock to some of those players – but she must’ve won them over, as now she helps build programs for their children and grandchildren.

During her nearly three decades at the Y, she’s developed women’s, men’s and co-ed softball leagues that have grown to include more than 1,500 players and a men’s recreational basketball league with more than 250 participants. Under her guidance, the YMCA’s Pop Warner football league has grown to become one of the largest in the Midwest with 2,500 players.

She also achieved another MHSAA first in 2000 when she became the first female selected for the Vern L. Norris Award for her work as an official.

“My purpose always has been to be an advocate for the officials and game participants,” Beckett said. “I try to be an active advocate all the time. And working for the Y too, we’re all about participation. My time 24 hours a day is actively advocating for game participants and officials.”

Beckett is a 1971 graduate of Mount Pleasant High School and a 1973 graduate of Northwestern Michigan College. She briefly left Traverse City after college before returning a few years later, and became involved with the thriving and close-knit recreational scene in her new hometown. She soon began working part-time at the YMCA, in charge of organizing its basketball program.

Her credo as program director is similar to that of the MHSAA – she creates programs for people who want to participate, and she works to give them the best possible experience in part by making sure the programs are managed by qualified officials.

But she’s also made it a priority to mentor and provide a positive influence to women and men both who are following in her paths.

“At times, it can be very intimidating to be one of the few women in our field. Barb has such an amazing relationship with those she works with and for. To tell you the truth, I can’t say if I know of anyone more well-liked and respected who does so many things,” said Heather Simpson, who coaches volleyball at Traverse City St. Francis, girls basketball at Traverse City Central and works for Beckett at the YMCA.

“I can’t imagine where I would be had I not been able to work and learn from someone like Barb Beckett. I work with young athletes currently, and I want for them to see that women can be a success in whatever they choose. We talk about choices in life. … I try each day to choose to do something positive. That’s what I learned from Barb. Women can make an impact. Women can make a difference. Barb has made such an impact in our area in the world of athletics. She has opened so many doors for so many women.”

Beckett also has worked three MHSAA Girls Basketball Finals and three Softball Finals, twice serving at the latter as umpire in chief, and was an alternate for a number of other championship games. She has officiated several Boys and Girls Basketball Semifinals and Softball Quarterfinals during her career, and continues to serve as president of both the Grand Traverse Area Umpires Association and the Northern Sports Officials Association. She also serves as an assigner of girls and boys basketball and softball officials in the Traverse City area, and was named to the Basketball Coaches Association of Michigan Hall of Honor in 2006.

Beckett also has served as commissioner of District 19 of the Michigan Amateur Softball Association since 1992, and has been instrumental in hosting four women’s, two men’s and one co-ed state final. She’s officiated both women and men’s MASA state finals and received that body’s Award of Excellence in 1996.

“Barb Beckett believes in how athletics and extracurricular activities can impact our kids and communities in such a positive way. So often when I am frustrated with how things are going and how everyone points fingers, she simply says to me, ‘Heather, be part of the solution, not part of the problem,’” Simpson said. “She reminds me that I can make a difference, just as she has with so many. We are in a society where it’s all about travel teams and what the scoreboard says; Barb is still old school and cares about the product she puts out there and the relationships that are formed from her work at the YMCA and in athletics. People like Barb, who care so much for those around her, get lost in the shuffle.

"Administrators call her, officials call her, coaches call her and parents call her for advice and simply just to talk. For me, she has done so many things to help me grow as a person, as a coach and a leader in our community. It's an honor to work for and with Barb Beckett. I truly think that each and every one of us could benefit from sitting in her office and just listening to her."