The MHSAA continues to explore ways to interest and invite potential officials to join the ranks of those who play massive roles in administrating our games all over the state.

A few recent efforts have produced excellent results and ideas for the future.

On Saturday, longtime officials Brian Morley and Bruce Moore, along with the Bay Metro Officials Association, hosted at Grand Blanc High School a free clinic for those interested in becoming basketball referees. 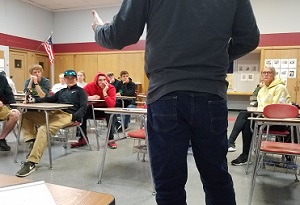 The MHSAA also set up a table at the event and provided free registration for attendees – and 31 signed up with the MHSAA on the spot. The Association’s in-person presence at the clinic also gave attendees an opportunity to ask questions and learn more about the next steps after taking part in the training.

All 31 will be first-time basketball officials, and most registered to officiate for the first time in any sport.

More great steps came April 29 as the Jackson Area Officials Association introduced the avocation to more than 30 aspiring officials at a meeting that also was designed for anyone interested in becoming an MHSAA basketball official.

Bill Walker, an organizer of the event and official for more than a decade in his area, said eligible Legacy Officials at the meeting were assigned mentors, and all attendees committed to attend a June clinic at Jackson College. Those leaving the area for college this fall were provided with officiating contacts in the communities where they will be attending school.

The upcoming clinic, free of charge and organized by Walker and Jackson College women’s basketball coach Heather Brown, will provide “real game” work for attendees as they receive training and mentoring.

This is older news in the Grand Rapids area, but definitely worth a statewide mention. The Ottawa-Kent Conference traditionally has named its hockey divisions Tier 1, Tier 2 and Tier 3, but has selected names to honor past contributors beginning with the 2018-19 season.

One division will be named after Ron Baum, a longtime coach at East Kentwood and the second winningest in MHSAA history. Another division will be named in honor of late Grandville standout Ryan Fischer, also a member of the MHSAA Student Advisory Council, who died in his sleep the night before his team’s Division 1 Semifinal in 2014. The third will be named for late official Dave Rue, who died in 2017 after a fight with cancer and was beloved in the hockey community.

Also in hockey, Jenison took a few minutes to pay a touching tribute to official Ray Sheahan on the ice before his final MHSAA game – he retired at the end of this winter from high school hockey after 22 years as an MHSAA registered official.

Sheehan also has been involved in mentoring officials at various youth levels in the Grand Rapids area with an impact reaching far past high school rinks. Check out the tribute below:

PHOTO: Aspiring basketball officials listen in during a meeting with the Jackson Area Officials Association on April 29. (Photo courtesy of the JAOA.)