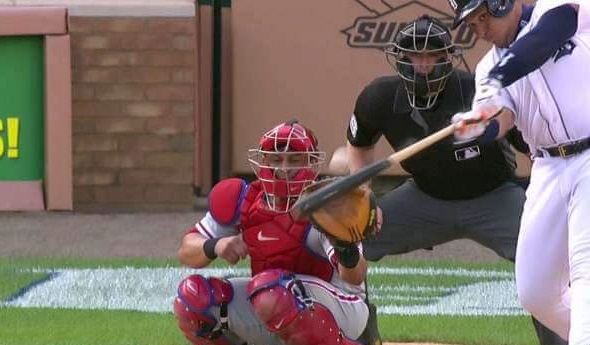 Umpire Nic Lentz stepped onto the field April 20 at Marlins Park prior to Miami’s game against the Washington Nationals, and he was met by moments he’ll remember the rest of his life.

The game was his first at the Major League Baseball level. And if that wasn’t enough, the Howell native's parents Steve and Tammy were in the crowd – “so not only was it a special moment for me, but also making them proud walking on that field for the first time is something I’ll have for the rest of my life,” Lentz said.

“It was all very humbling. It’s hard to describe what it feels like receiving that call or stepping on that field for the first time,” Lentz wrote recently during a break in his whirlwind tour as a first-year fill-in for MLB umpires who are ill, injured or on vacation. “That being said, from a personal aspect, it took me back to years I have spent in this profession … things I have learned throughout the years both on and off the field.”

By the end of May, Lentz had traveled from Miami, to Cincinnati, then on to Baltimore, Los Angeles, Seattle, Arizona, Houston, Detroit and Toronto.

And the story of his start in officiating has been nearly as well traveled these last few weeks, with the hope his rise through the ranks – including a spring as part of the MHSAA’s Legacy Student Officials Program – might serve as an inspiration to young people considering the opportunities that come with the officiating avocation.

Lentz, 26, has risen from entry level to the largest stage in just under a decade. He began umpiring at the rec levels when he was 12; by the time he was 16, he was done playing and passionate about becoming an umpire.

A homeschooled student in the Howell area, Lentz approached then-Highlanders athletic director Doug Paige to find out how he might be able to continue growing his skills and take them to the next level.

Paige called Dan Jeffery, who currently is in his 22nd year as an officials assigner in the southeastern Lower Peninsula and works with the Kensington Lakes Activities Association and Southeastern Conference.

“Nic was 16 years old, and my son (Dan, Jr.) and I were working a game at Hartland, and I said why not come out and watch us work and we’ll talk,” Jeffery Sr. said. “Next thing you know, here’s this tall, skinny young kid waving at us.”

A decade later, Lentz took his post near first base in front of nearly 17,000 fans, the latest step in a career that’s also included stops in 10 leagues at various levels of the minor league and instructional ladder, mostly in the U.S. but also Venezuela, and MLB spring training as well.

That first meeting with the Jefferys turned into a spot in the MHSAA Legacy Program, which pairs high school juniors and seniors interested in officiating with a registered MHSAA official. The veteran mentors the younger official, providing guidance in getting started while the pair works games together at the middle school/junior high and subvarsity levels. 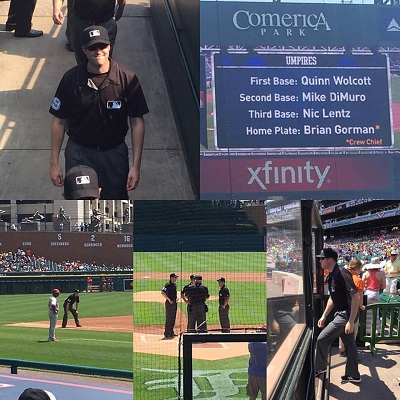 Jeffery Sr. paired Lentz with Kyle Clapper, a former player when Jeffery was part of Howell’s football staff. Lentz also continued attending games worked by Jeffery and his son (Dan Jr. now officiates at the college level), and remains in regular contact with Jeffery Sr. today. He received additional input and guidance from MHSAA assistant director Mark Uyl, who is in charge of officials for the association and worked the NCAA Division I College Baseball World Series in 2014.

“(Lentz) came around and watched and showed this unbelievable interest,” Jeffery said. “He just took to it. It’s unbelievable. It’s amazing.”

“From a personal aspect, it was the next stepping-stone for me,” Lentz said of the Legacy Program. “I had been umpiring travel baseball for the past few years now, and I wanted to grow in my skills and take it to the next level. The Legacy Program seemed to be the best option. I always looked at it as the launching pad for where I am today.”

Lentz clearly has a natural talent for his profession. In January 2008, just turned 18 and recently graduated from high school, he attended the Jim Evans Academy of Professional Umpiring. After graduation there, he was put on the wait list for the Coastal Plain League, a wood bat league for college players in Virginia and North and South Carolina. He worked in that league three weeks during the summer of 2008 – and then received a call from the Arizona League, a rookie league that serves as the entry level for many minor league baseball players.

With that, Lentz began climbing his ladder as well.

Lentz is in his third season in the International League, which is Triple-A – the highest minor league level for players. He’s a crew chief at that level.

“He knows the rules, he studies really well, and mechanically he’s incredible. He not only studies the rules, but he knows where he’s supposed to be.” 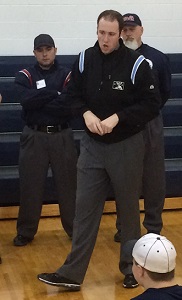 Lentz lives in Holland (as do his parents) and in 2009 joined the crew of instructors for the annual Southeast Michigan Umpire Camp, which focuses on teaching high school officiating mechanics and draws roughly 100 officials to Livonia every February. Jeffery said that two years ago, there were 40 officials younger than 20 years old.

Jeffery calls himself the “old dude” at 68. But Lentz’ presence and current experience certainly resonate with their students.

“Nic is great with the campers and is very well-liked,” said official Bill Parker, the president and founder of the camp who also has worked in minor league baseball. “He will do anything that is asked of him. It has been a great joy watching Nic progress through the minor leagues and into the major leagues.”

“I would and do tell future and current umpires to continue to have a passion for the game. You can’t umpire any game, be it at the amateur or professional level, without that passion,” Lentz said. “So follow that passion, have fun doing it, stay humble and work hard every day. I would say that to be true for any career in life, wherever that passion may be.”

Michigan family, friends and fellow officials are cheering on that passion as they watch Lentz’ travels this summer and anticipate his move to MLB full-time in the future. Jeffery said he sees Lentz working at that highest level for decades to come – but also told his former protégé to make sure to take it all in that first game April 20, “take a deep breath, take a look around and remember where you’re at.”

And Lentz will never take for granted those who have helped him get there.

“There are so many people I have kept in touch with over the years, both before my professional career and throughout it,” Lentz said. “There are so many friendships I have built, and the support of everyone has always meant a great deal to me. And you can’t come close to putting a price tag on that.”

PHOTOS: (Top) Nic Lentz serves as plate umpire during an MLB game last month. (Middle) Lentz enters the field and works at third base during a game at Comerica Park. (Below) Lentz instructs umpires at the Southeast Michigan Umpire Camp. (Photos courtesy of Dan Jeffery, Sr., Bill Parker and the Lentz family.)