An educator and official beginning in 1960,  he also has officiated cross country and basketball, and has been a long-time member of both the West Michigan Officials Association and the Association of Track Officials of Michigan – having served both as president and rules chairman.

Berry also coached football for 36 years, with 32 at the high school level at Tawas, Farwell, Wayland and Wyoming Godwin Heights before spending four seasons as an assistant at Grand Rapids Community College. He was a head coach for 27 of those high school seasons, and was inducted into the Michigan High School Football Coaches Association Hall of Fame in 1988 and the Michigan High School Coaches Association Hall of Fame in 2008.

What keeps you coming back?

Just working with the kids, basically. There was a time, a turning point, when I did not know if it was as ego thing or an obsession. At some point, it was just a thing I wanted to do. It became so much fun, I didn't want to quit.

What was that turning point?

Ten or 12 years in officiating, I was in the process of building a career and wanting to take the next step each time. I got to the point where I was doing varsity basketball, and I got established there and wanted to move to the college ranks. And I did that. But 12 or 13 year in, there was a Grand Rapids City League game that went to double overtime. The two teams were undefeated at the halfway point (of the season), and it was a tight ballgame. After the game, we used to stand in front of the scoring table waiting for the books to get finalized. I looked over and saw the coach from the losing team talking to his kids, and the next thing we know, a few of them are coming over toward me. I’m thinking “Oh boy; here we go.” But the kids came up and said their coach wanted to make sure (they) congratulated (us) on a job well done. And the next thing out of their mouths was, “Wow, was that a great game?” And that’s where they left it. They said thanks and left. I thought I would’ve worked that night for nothing. And it just went from there.

What do you enjoy most about officiating?

It’s being with the kids more than anything. I do college track, high school track and junior high track, and some of the most fun situations are with the junior high kids. … Those kids either don’t know what’s going on, or keep you hopping, keep you on your toes. Being around them, it helps keep me a little young.”

You’ve been a teacher, coach and official. Are there similarities among the three?

All three blend together really well. You get to look at coaching as having the ability to teach kids how to have fun, and officiating you look at as watching kids have fun. Those two things go hand in hand. And teaching, of course; I was in the physical education field and I’d see all these kids and athletes who I’d eventually be coaching. Being around them all the time was just a bonus.

Is recruiting officials tougher now than it was in the past?

It’s a little bit tougher now. At the banquet the other night, there were only seven or eight 50-year people. Ten or 15 years ago, we didn’t even have a 50-yard award. And when that came in I thought it would be great because there would be a lot in that class. Last year I got my 50, and there were only 12 or 13 of us. The 40-45 (year) class had only 20 or 25. It just seems like the numbers are dwindling. You don’t see the commitment to carry on.

You see the same thing in coaching. I coached football 36 years, and you don’t see that. You see coaches get out after 10 or 12 years, burned out. I don’t know what the situation is causing that, but it’s definitely getting hard.

What advice do you give to young officials?

At this point in time, I’m working in the O-K Conference as a basketball observer of officials. Over the last six or seven years, I’d gotten 10-15 young guys. I like to go watch the JV, the freshmen guys, talk to them at halftime or after the game, like having a mini clinic with them. I encourage them to go. Last year I saw a dozen of those guys move on to the varsity ranks. Basically, I just tell them just to stay with it. And when the opportunity comes, you’ve got to jump in with both feet.

PHOTO: (Below) Lyle Berry speaks to the audience during Saturday's Officials’ Awards & Alumni Banquet at the Kellogg Center in East Lansing. 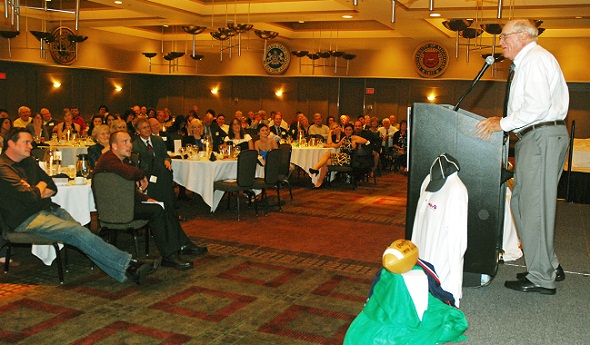