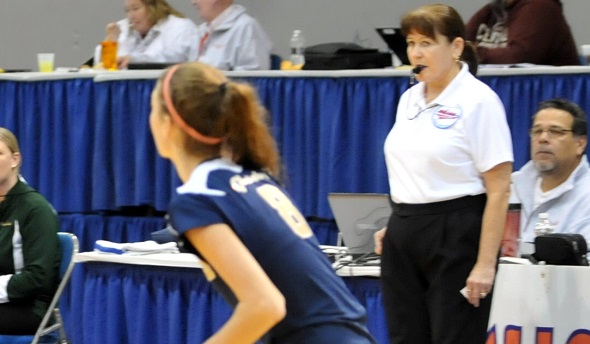 Many of Jill Baker-Cooley’s favorite memories of officiating are funny ones, and she laughed last week recalling her first basketball game at the college level.

Fatigue was setting in quickly as she ran up and down the court during a Division III matchup at Calvin College. Teams played 20-minute halves, and she remembered wondering if halftime was coming up soon. “I didn’t know if I was going to make it. I thought I was going to die,” she said – and then she realized only four minutes had come off the clock and she had a long way to go.

She chuckled as well in recollecting another memory, but because it was drenched in irony. As an official starting out, she was encouraged to join an area officials association. She showed up for her first meeting at a local gym – and when she sat down in the bleachers, all of the men around her got up and sat in the stands on the other side.

But that would serve only as motivation, not discouragement, for this year’s Vern L. Norris Award winner.

“When I see how different it is now … back then it was just a fight,” said Baker-Cooley, now living in Big Rapids. “Not only trying to officiate, but you had to prove (yourself) every single time you stepped out there. It was a tough go for a while.

“I think at the time, you don’t realize it. But I’m not a quitter. And if I do quit or retire, it’s going to be on my terms.”

And she’s not done yet. Baker-Cooley is in her 39th year as an MHSAA-registered official, this school year for volleyball, cross country and track & field. She has worked MHSAA Finals in all three sports and 20 championship events total, in addition to officiating college volleyball and track as well and basketball at both levels during the first many years of her career.

The Norris Award is presented annually to a veteran official who has been active in a local officials association, has mentored other officials, and has been involved in officials’ education. It is named for Vern L. Norris, who served as executive director of the MHSAA from 1978-86 and was well-respected by officials on the state and national levels. Baker-Cooley will be honored at the Officials’ Awards & Alumni Banquet on May 5 at the Kellogg Hotel & Conference Center in East Lansing. Norris initiated the annual officials celebration in 1980, and this will be the first since his death Feb. 12.

Baker-Cooley’s first MHSAA Final was her only one in cross country, at the end of the 1994 season. She has officiated five Finals for volleyball, most recently the Class C championship match in 2012, and 14 in track & field and as recently as 2015.

“Jill Baker-Cooley has been a strong, pioneering official, and is well-respected not only for her work during competition but for her many contributions to building up the officiating avocation in our state,” MHSAA Executive Director John E. “Jack” Roberts said. “She’s personable and approachable, a valued teacher and mentor. We are delighted to honor Jill Baker-Cooley with the Norris Award.”

As noted above, the Norris Award salutes those who have contributed to mentoring and training officials, and education remains a cornerstone of Baker-Cooley’s work. She served more than 30 years as a school counselor, in admissions at Michigan Technological University and Montcalm Community College, as a grant recipient and academic counselor at Ferris State University and then working with high school students at the Wexford-Missaukee Career Technical Center.

That love of educating has been part of her officiating career as well, as she’s served as a volleyball trainer for three officials associations, presented at MHSAA “Train the Trainers” conferences four times and co-founded with 2006 Norris winner Jeanne Skinner the Ferris State Volleyball Officials Camp for those who work high school matches. She’s also served as president of the Association of Track Officials of Michigan (ATOM) and been involved with USA Track & Field, the Professional Volleyball Officials Association and the Michigan Board of Volleyball Officials.

“Jill Baker-Cooley is an educator in her primary vocation. Over many years, she has been able to translate her vocational skills exceedingly well and often into the realm of high school officiating,” wrote 2005 Norris winner Bruce M. Moss in recommending Baker-Cooley for this year’s award. “She has been a strong and continuous presence in her local officials association. Her efforts have lifted the expertise of innumerable officials across this state in all of the sports she touches, and she has been a true champion for women in sports officiating.”

Baker-Cooley is a 1974 graduate of Cadillac High School, where she raced on the ski team at a time when many schools were adding girls sports or expanding those offerings. She went on to earn bachelor and master’s degrees from Central Michigan University, then received further certification in administration and training from Western Michigan University.

While at CMU, Baker-Cooley took a basketball officiating class taught by Marcy Weston, a nationally recognized advocate for women’s athletics over more than four decades as a teacher, coach, official and athletic director. Baker-Cooley was hooked.

Longtime official Lew Clingman – who will receive his 50-year award at next month’s Officials’ Banquet – also served as an early mentor as Baker-Cooley navigated an officiating world where she said she was one of fewer than 10 women working basketball in Michigan when she first registered for 1976-77. Others, including Traverse City’s Barb Beckett (2000 Norris honoree), Skinner and Kentwood’s Betty Near also provided assistance and inspiration.

She retired from counseling at the start of 2016 and stopped officiating basketball a decade ago after knee injuries slowed her. But in addition to her MHSAA Finals, Baker-Cooley has officiated college league playoffs in volleyball and returned to Calvin a few seasons after that first basketball game as a table official for an NCAA Tournament contest in that sport.

Tickets for the banquet are available to the public and priced at $20. They will not be sold at the door. Tickets can be ordered by calling the MHSAA office at (517) 332-5046 or by sending the order form. Deadline to order is April 27.

The officials on this list will receive their 20, 30, 40, 45 or 50-year service awards at the 39th annual Officials’ Awards & Alumni Banquet on May 5 at the Kellogg Hotel & Conference Center in East Lansing.