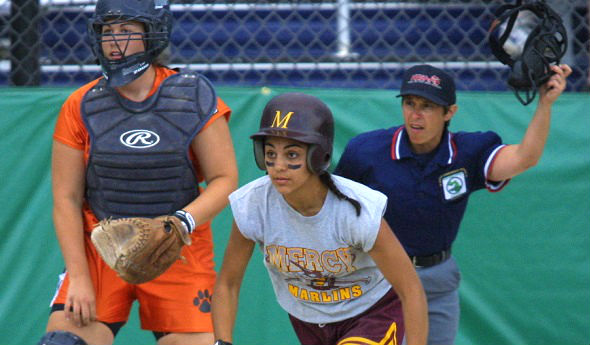 Linda Hoover always had aspired to become a coach, and her class schedule at Olivet College during the late 1970s reflected that goal.

But at the suggestion of one of her advisors, Hoover added an officiating class one term. That same advisor soon needed a partner to officiate a volleyball match a few blocks down the road at Olivet High School – and Hoover found herself registering with the MHSAA the day before the first serve.

“I was scared as heck,” Hoover recalled this week. “I was going up the ladder for the varsity match, and I said, ‘It’s my first one!’ But she was kind enough … and I knew what I was doing. I was comfortable, and I truly enjoyed it.”

Admired as a pioneer in officiating, especially by women who have followed in taking up the avocation, she also continues to serve Michigan at the high school level as an umpire, clinician and mentor, and has been selected to receive the Michigan High School Athletic Association’s Vern L. Norris Award for 2016.

Hoover will be honored at the Officials’ Awards & Alumni Banquet on April 30 at the Crowne Plaza Lansing West in Lansing. She is in her 36th year as an MHSAA-registered official, working softball and volleyball in addition to softball at the collegiate, national and international levels.

A teacher at Marshall from fall 1982 until her retirement at the end of the 2013-14 school year, Hoover also has served as a clinician for numerous softball and volleyball officiating clinics and as a clinician and officials evaluator during the MHSAA Softball Finals. She has contributed on various MHSAA committees and assisted at the MHSAA Volleyball Finals, and also served as a facilitator and speaker at the MHSAA’s Women in Sports Leadership Conference.

“I’ll never forget when I was still a rookie official, I’d been in it four or five years, and I was going to a high school softball game. A couple of girls were like, ‘Oh my gosh, we have a female official,’” Hoover said. “They’d never seen a female umpire. 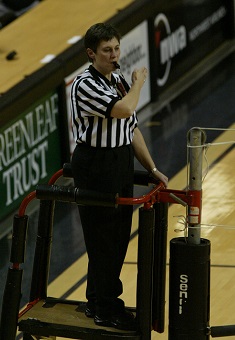 “I want to present a positive role model, a positive experience for those who might want to get into (officiating).

Hoover graduated from Constantine High School in 1977 and Olivet College in 1981 with a bachelor’s degree in physical education and minors in communications and psychology. She lettered in field hockey, basketball, softball and volleyball during her college athletic career, and is a sports Hall of Fame member for both her high school and college.

She also did get that opportunity to coach, first middle school volleyball at the former Wattles Park (now Battle Creek Harper Creek), then junior varsity softball and middle school basketball at Marshall. But she found she enjoyed officiating more than coaching – and also found the avocation to be her “niche” and a place where she could make an impression on female athletes in particular.

“Linda Hoover is considered by her peers as one of the elite softball umpires in this country, and she continues to share her gifts with athletes and coaches at our level while serving as an inspiration for many aspiring officials,” MHSAA Executive Director John E. Jack Roberts said. “She has provided decades of leadership and commitment to her craft. And as during her many years of classroom teaching, Linda is a tireless, understanding and energetic instructor as she works with officials seeking to reach toward her high level of expertise.”

Hoover also has been inducted into the Michigan Amateur Softball Association Hall of Fame and has received recognition as an “Elite Umpire” by ASA/USA, and attained the gold level of the ASA Umpire Medals Program. She was awarded membership in the ASA’s National Indicator Fraternity and certification by the International Softball Federation.

About half of the games she currently officiates are at the high school level; she also continues to officiate in the Mid-American Conference and has worked in the Big Ten, Big East and Missouri Valley conferences among others as well.

Hoover also contributes to her community as a volunteer for Marshall Area Community Services – she is a past board member for the program – and volunteers as well for the Marshall Fountain Clinic.

Past recipients of the Norris Award

Tickets for the banquet are available to the public and priced at $20. They will not be sold at the door. Tickets can be ordered by calling the MHSAA office at (517) 332-5046 or by sending the order form. Click for a full list of officials who will be honored.

VIDEO: Linda Hoover was one of many officials who answered the question "Why Do You Officiate?" for this MHSAA series.