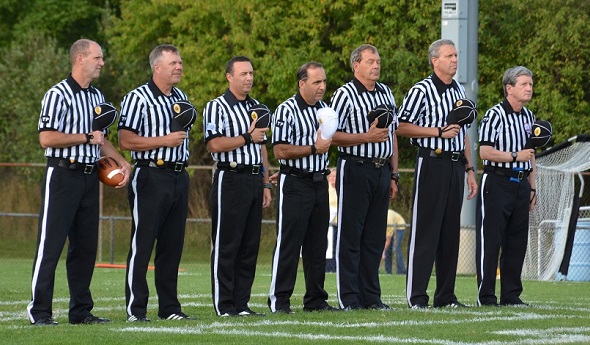 At 4:30 p.m. before the first game of this high school football season, a small group of mid-Michigan officials met at Lansing’s Mount Hope Cemetery.

As has become their tradition, they paid respects to a friend gone too soon, told a few stories, then worked the game in his honor before winding down by rehashing more of the same memories of Tony Payne they recall at the start of each fall.

Payne, a Lansing Harry Hill High School and Ferris State University graduate, served as an MHSAA official for 23 years and also worked in the Big Ten, Mid-American Conference and NFL Europe before dying on April 21, 2006. He was only 44 years old, passing after a lengthy illness.

Each fall since, a group of officials mostly from the Lansing area but representing Jackson and Muskegon as well have gathered to work a “Tony Payne Game,” mostly to honor their friend but also to raise money in his name for a scholarship that could be awarded for the first time next year.

This year’s Payne Game was opening night, Aug. 28, at Haslett as the Vikings took on Walled Lake Central.

“Tony was a mentor to everybody; he pretty much epitomized what we try to do around here,” said Jeff Spedoske, president of the Capital Area Officials Association and one of many who learned under Payne’s tutelage. “When you accomplish something in officiating, get the privilege to be at that level, you try to turn around and help as many behind you as you can. That was him to a T.

“I can’t believe we’ve done it seven years. Every time I see that date that Tony passed, it doesn’t seem really that long ago.”

Joining Spedoske on the crew for this year’s Payne Game were Rob Stanaway, Bruce Keeling, Mark Coscarella, Craig Weirich, Mike Maisner and Tom Minter. That’s generally the group, along with Mike Conlin, who did not work this year’s game but was in attendance. All worked with Payne at some point during their careers, be it at high school games or as a member of his college crews. 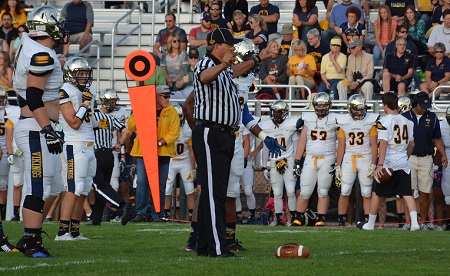 Together, they represent a combined 270 years of MHSAA officiating experience, although for a few the Payne Game is the only high school event they work each year. Conlin, Keeling and Maisner in particular remain active officials in the Big Ten, and the other five all have vast experience at higher levels.

But as Spedoske noted, so did Payne – and how he used that knowledge is part of what the crew annually celebrates.

Payne remained an MHSAA registered official through 2004-05, most years for football, basketball and baseball and also once for softball. He officiated six MHSAA Semifinals in either football, girls or boys basketball, and championship games in 1992, 1996, 2000 and 2001.

Conlin recalled a week when he and Payne worked a junior varsity football game at Leslie on a Thursday with two rookies – taking the opportunity to pass on their skills and experience in front of mostly players’ families.

Two days later, Payne officiated a Big Ten game in front of tens of thousands, not counting those catching the game on TV and the radio waves.

Stanaway’s first girls varsity basketball game was with Payne, a last-minute opportunity for the then-newer official. During the ride to the game, Payne quizzed Stanaway on rules, plays and handling people, then continued that support during the game and provided the “most honest and constructive feedback I have ever received” when the game was done, Stanaway said.

Within a couple of days, Stanaway was contacted by his assigner, who had changed all of his sub-varsity games for the rest of the year to varsity games – per Payne’s recommendation.

“Tony had gone out of his way to help me by contacting the person in charge and recommending me for ‘bigger’ games,” Stanaway said. “I thanked Tony over and over, and he only responded by saying that someday I would have the opportunity to help someone else, and when I did, I had better help them along.

“Tony's words are a driving force in my desire to be a part of the Capital Area Officials Association, added Stanaway, who serves as the CAOA co-director of basketball operations. “Tony has been a role model for me in teaching other officials about our avocation and supporting their officiating dreams. As I've watched new officials grow, improve, and achieve their dreams of working their first varsity game, their first tournament assignment, their first State Final or even advance to collegiate opportunities, I thank Tony for showing me not only how to help them, but why to help them.”

Conlin serves as assigner in the Capital Area Activities Conference and sets the game for the crew to work each year in addition to also working it most seasons. He and Payne went back to 1989, and Conlin hasn’t worked high school games regularly since moving to the Division I college level in 2000 – aside from the last few Tony Payne Games. 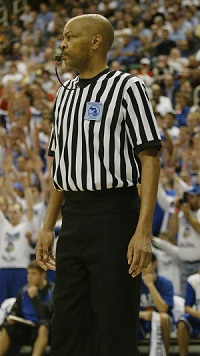 The CAOA gives a lifetime achievement award each year in honor of Payne, the association’s first treasurer.

“We work hard to keep Tony’s name out front,” Conlin said, “to make sure people don’t forget where he came from.”

The CAOA, with an initial donation from Alro Steel founder Al Glick and later contributions from the West Michigan and Jackson associations and crews Payne knew from college levels, has raised $75,000 – enough to make those three $1,000 scholarships endowed – and make it possible those scholarships could be given for the first time next year.

Comparatively, the money raised by the crew working the Tony Payne Game is only a small percentage. But the game is as much for that group of officials to work together in remembering Payne and then meeting together after at whoever’s house is closest to unwind and remember some more.

“It’s easily the most important game on my schedule in the fall, for me personally, and it’s fun to be able to work with those guys once a year,” Spedoske said.

“After the game we end up at somebody’s house, and that’s kinda what it’s all about. We end up telling a lot of the same stories over and over. It’s about remembering Tony and the times we had on the field and off the field with him, and keeping his memory alive.”