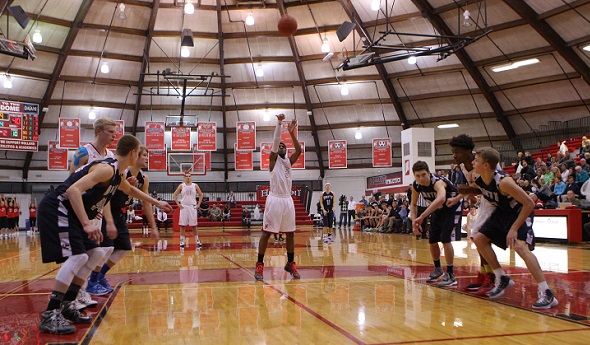 Holland’s Demetrius Lake finished his career this winter as one of the most prolific scorers in Michigan high school history, with 17 entries in the MHSAA record book highlighting his scoring and shooting prowess.

Lake’s 2,069 points over 76 games and four seasons (27.2 ppg) joined a list of those who have reached that milestone, and his 36.2 ppg game this winter rank ninth on a much shorter list of those who have averaged at least 36 for one season. He’s listed six times for scoring at least 20 points in a quarter, with the high 24 (tied for 11th most) in a 2016 games against Holland Christian

His 230 career 3-pointers rank 11th as well, and twice he made more than 20 free throws in a game with his 21 against Zeeland East on Jan. 13 tied for ninth most. He made 20 straight against Holland Christian on Feb. 3, the third-longest in-game streak, and his 221 free throws in 262 attempts this winter were the fourth-most makes. His 541 in 670 attempts over four seasons also rank fourth, and he made the season (.844 this winter) and career (.807) free-throwing shooting percentage lists.

The 5-foot-11 point guard will begin his college career next season at Schoolcraft Community College.

Click the "Boys Basketball" heading below to see where all of Lake's record book entries rank, and read on for more recent additions in boys and girls basketball, hockey, boys soccer and wrestling.

Nearly 50 years after accomplishing his record book achievement, Peck’s Harvey Krosnicki has been added for grabbing 30 rebounds in an 83-70 win over Marine City Holy Cross on Feb. 11, 1969. The 6-foot-4 Krosnicki also scored 41 points in the win as he began the final weeks of an outstanding high school career that saw him earn local and statewide honors.

Hunter Greer scored 22 of his 34 points during the fourth quarter of Allendale’s 62-55 Class B District win over Coopersville on March 5. He made 13 free throws during that final period. He will continue his career at Grace Bible College.

Burton Faith sophomore Ezra Giraud had 124 steals over 22 games this past season to rank eighth on the single-season steals list and help his team to a 15-7 finish. He had a game high of 12, which tied for sixth most on that list.

Former Ludington star Mandy Stowe already was included for her 2,160 points from 1993-96, which still rank 17th most all-time more than two decades after she finished her career. She was added for three more achievements – 315 career free throws (in 479 attempts), 337 rebounds as a junior and 1,167 career rebounds, which rank 15th on that list. Stowe went on play at University of Michigan and University of Wisconsin-Green Bay, and then professionally in Europe.

Lansing Christian’s Grace Haley also is now included for excellent free throw shooting over four varsity seasons – her 316 free throws in 465 attempts through this winter made the career list in the category. The 5-8 guard will continue her career at Bethel College in Indiana.

Calumet downed Negaunee 8-0 on Feb. 9, putting the game out of reach with three goals over 37 seconds during the second period – the fifth-fastest three goals scored back-to-back-to-back by one team in MHSAA history. Brent Loukus tallied the first at 7:53 in the period, followed by Rory Anderson at 8:13 and Matt Yeo at 8:30.

Capac senior keeper Jacob Witt had a busy night in net with 30 or more saves in two games this past fall – 35 against Imlay City on Sept. 12 (tied for eighth-most in one game) and 30 against Richmond on Oct. 12. He finished the fall with 350 saves, seventh on the single-season list.

Gaylord standout Dominic LaJoie capped his outstanding career this winter with his third individual championship – and multiple MHSAA records. LaJoie was 52-0 as a senior to finish 200-4 overall, and his 43 technical falls as a junior, 94 over his career and 236 two-point near falls all top those categories, while his 879 career takedowns rank fourth. LaJoie will continue his career at Cornell University.

Former Niles Brandywine standout Chanc Ravish was added for his 194 wins (against 31 losses) from 2010-13, as well as for his 129 career pins. Brandywine’s Joel Perry was added for 119 career pins from 2005-08, and Warren Watson for his 58 wins during the 2008-09 season. Ravish went on to wrestle at Wabash College and Calumet College of St. Joseph, both in Indiana.