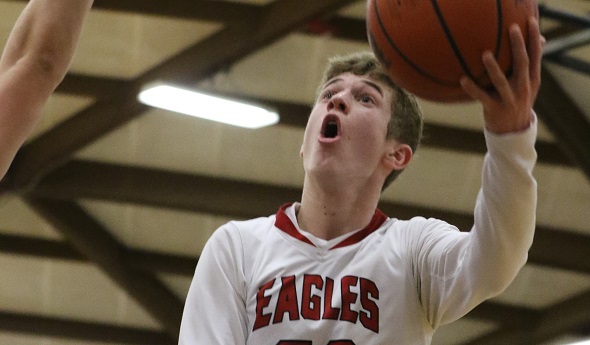 Dylan Jergens put up numbers this past boys basketball season – and over his four-season career – that may not be matched for many years to come.

He finished at Marcellus Howardsville Christian with 21 record book entries; his most notable was an all-time best 971 points over 24 games this past winter – at a 40.5 ppg average that ranks second all-time – to break by two points the record set by Hastings’ Mark Brown during the 1984-85 season. Jergens graduated with 2,782 points over 94 games to rank third on the career scoring list, trailing only Brown with 2,789 points and record-holder Jay Smith, who scored 2,841 for Mio before graduating in 1979.

Jergens, who will continue his career at Central Michigan University, scored a quarter-high of 25 points and also made the season scoring list as a junior with 805. His 98 3-pointers as a senior were tied for seventh most, with his 320 career 3-pointers second for that category. He also had 183 free throws made this winter, good for 14th most for one season, and his 536 career free throws rank fifth all-time. He made the career assists list with 477 and the career steals list with 318, which ranks eighth.

See below for more recent record book additions in boys basketball, baseball, girls lacrosse, football and girls soccer, and click on the headings to see those record books in full.

Adrian Williams was a four-year standout for Detroit Southeastern from 1992-95, and his 52 career doubles rank eighth all-time. Williams also was a standout pitcher and helped Southeastern to the Class A Quarterfinals in 1993.

Iron Mountain junior Marcus Johnson became one of six players in MHSAA boys hoops history to top 100 3-pointers in a season this winter, draining 102 of 216 attempts (47.2 percent) to tie for fourth most all-time. He also moved up the career list with 216 3-pointers over his first three high school seasons.

Ann Arbor Skyline’s Ryan Wade closed his career this winter with one of the top 3-point shooting performances all-time. The senior made 97 3-pointers on 295 attempts and reached the career list as well with 189 in 580 attempts over 68 games and three seasons. He will continue his career at College of the Holy Cross in Massachusetts.

Hartford improved seven wins this season to finish 18-4 in part on sharp 3-point shooting. The Indians made the single-season team 3-pointers list with 197 and with Bangor tied for ninth most between two teams in one game as they combined to make 23 (Hartford connecting on 14) in Hartford’s 85-57 win Jan. 25. Brandon Galvan just missed making the single-season individual 3-pointers list, drilling 78 over 21 games.

Bellevue went a combined 87-11 over the last four seasons with Wyatt Waterbury and Gino Costello helping pace the defensive effort with record list totals of 347 and 250 steals, respectively. Waterbury made the single-season steals list three times with a high of 95 as a sophomore, and his total ranks fifth on the career list. He also made the career 3-pointers list with 206. Additionally, Evan Bloch was added for 11 steals in a game against Waldron on Dec. 11, 2011.

Zac Clark closed his Britton Deerfield career this winter with more than 1,000 points and on the career rebounds list with 811 over four seasons and 71 games (and despite playing just six games as a freshman). He will continue his career at Concordia-Ann Arbor.

Freeland’s then-junior Jayce Bourcier blasted a 77-yard punt during his team’s 35-18 win over Carrollton on Oct. 13, 2017. The punt flew nearly 60 yards in the air and ranks 10th for distance all-time.

Jake Burger capped his three-year varsity career last fall all over the Pittsford record book. He also earned lines in the MHSAA record book with 4,310 career passing yards and six passing touchdowns in a playoff loss Oct. 26 against eventual Division 8 champion Reading. He will continue his career at Hillsdale College.

Emma Murphy and Grace Wilson earned Midland Dow’s first girls lacrosse record book entries for offense this spring with single-game accomplishments. Wilson, a sophomore, had five assists during a 21-0 win over Grand Blanc on April 23. Murphy, a freshman, scored 11 goals during a 19-9 win over Lake Orion on May 3. Murphy’s goals tied for seventh most in one game.

Delton Kellogg won its first District title this spring with help from a pair of standout juniors who also earned record book accolades. Holly McManus scored 50 goals – including seven in one game – and also made the single-season list with 58 total points. She’s also on the career goals list with 83 over 45 games and parts of three seasons. Amber Mabie also is a three-year varsity player, and she was added for 25 assists this spring.

Marshall’s Kate Face was added for scoring 88 goals over her four-season career that finished this spring. She previously had made the single-season scoring list with 32 goals as a sophomore. She will continue her career at Indiana State University.

Danae Moriarty made the records with 45 goals, 23 assists and 68 points total during her junior season this spring for Plymouth Christian Academy, and the goals pushed her onto the career list as well with 82 over three seasons. She will not be playing as a senior, instead spending the school year as an exchange student in Germany.

Kayla Beebe capped her career this spring by leading Kalamazoo Christian to its third straight Division 4 runner-up finish, scoring 37 goals to end her four varsity seasons with 103. She will continue her career at Calvin University.

Tecumseh freshman Madalyn Freitas started her high school career with one of the most memorable individual performances in MHSAA history. She scored 62 goals, fifth most all-time, and finished with 76 points, tying for sixth most during one season.

PHOTO: Howardsville Christian’s Dylan Jergens gets to the basket during a 2018 Quarterfinal against Hillsdale Academy. (Photo courtesy of JoeInsider.com.)