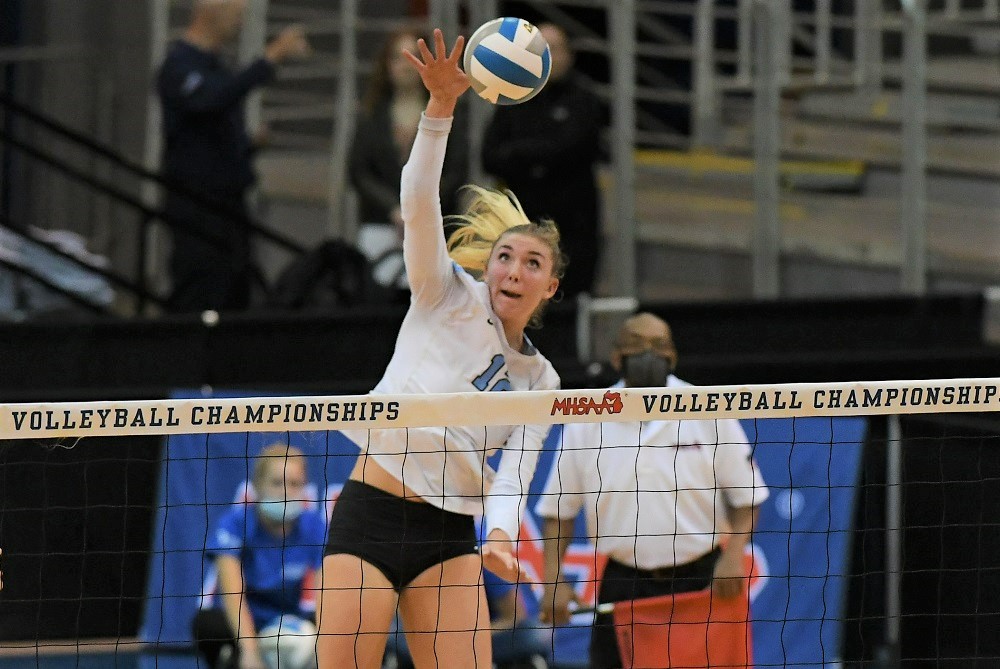 A number of standouts drove Grand Rapids Christian to three straight Division 2 titles from 2018-20 and its Semifinal appearance this past season, including a pair of hitters now among the MHSAA single-season and career leaders in kills.

Current senior Evie Doezema was added to the record book for her 748 kills in the fall and 1,603 over 466 games and four seasons. Addie VanderWeide, who graduated in 2021, was added for 592 kills over 103 games her senior season and 2,110 over 477 games and four seasons. Doezema and senior setter Alyssa DeVries also were added for their contributions in a 3-1 Regional Final win over Hudsonville Unity Christian on Nov. 11 – Doezema for 42 kills and DeVries for 53 assists.

VanderWeide plays at Iowa, and Doezema has signed with Michigan State.

A total of 26 record book entries covering the recent history of Kingsley as a state power were added, with a number of single-season and career highlights for players over the last two decades. Among those added for single-season kills were Katie Travis, Jill Walton, Jessica Lefler, Hannah Bach and Lilly Travis, with Lefler (2,205 from 2015-18), Walton (1,682 from 2004-06) and Brittany Bowman (1,562 from 2016-19) making the career kills list. Maddie Bies, Erica Berridge, Dakota Deweese and Leah Hall made the single-season assists list, with Hall ranking 17th on the career assists list with 3,881 from 2011-14 and Brittany Denter (2,983 from 2005-Fall 2007) and Bies (2,617 from 2017-19) joining her. Austyn Deweese was added for 407 blocks from 2017-19, and Emily Fasel, Bowman, Sam Zubalik, Walton and Hillary Hoeflin made the aces single-season list during the current rally scoring era. Holly Nickerson was added to the single-season aces list from the pre-rally scoring era for her 130 in 2002-03. Austyn DeWeese is playing at Central Michigan, Lefler has gone on to play at Ferris State, with Hall at Lawrence Tech, and Denter went at Caldwell (N.J.). Walton played basketball at Lake Superior State, and Bowman was a redshirt freshman on that team this season.

After an injury kept her from playing as a junior, Whitehall’s Rayne Thompson stormed back this past fall – and her 45 kills in a five-set match Oct. 16 against Muskegon Western Michigan Christian rank fifth all-time in the rally scoring era. She also made the single-match kills list with 32 against Fruitport in a sweep Nov. 4. She signed with Northern Michigan University.

Emma Mirabelli finished a massive hitting career for Traverse City Christian in the fall, posting 922 kills to finish with 2,089 from grades 9-12 (and with 89 more as an eighth grader on varsity in 2017). Her single-season total ranked eighth on that list. She had 44 kills in a four-set match against Traverse City St. Francis on Sept. 16 of last season that rank sixth-most since the start of rally scoring. Teammate Julianna Brower made the single-season assists list with 1,230. Brower will continue her career at Cornerstone University, and Mirabelli has committed to Purdue-Fort Wayne.

Johannesburg-Lewiston’s Autumn Vermilya capped her career in the fall by earning three record book entries. She set a personal high of 54 assists Nov. 4 vs. Charlevoix and also had 48 against Pellston on Oct. 25. She also made the single-season assists list with 1,207.

Emiley Bender also earned a memorable senior-year accomplishment, making the record book with 29 kills for Sandusky during a five-set match against Harbor Beach on Oct. 12.

A number of standouts from Flushing’s recent history also were added. Current senior Kendyl Andrews made career lists with 4,075 assists (ranking 10th) and 304 aces and the single-season assists list twice with matches both of 46. Whitney Heeres was added for 1,731 kills over her four seasons finishing in 2009, and also for her 645 over 150 games as a junior in 2008. Carson Rutherford was added for 598 kills as a senior in 2014 and 1,545 over her four-season career. Rachel Hamblin made the single-season aces list with 116 over 139 games during the winter 2006-07 season. Karen Fox had 130 aces as a junior in 2005-06 and also was added for 315 for her career. Lexi Kiefer was added to the career assists list with 3,282 from 2011-14, Lauren Fenton made the list with 2,601 from 2008-11 and Ashley Hurand was added for 2,618 from 2006-08. Kari Carnell made the career assists list with 2,797 despite playing only her senior season, 2004-05, with rally scoring. Andrews has signed to continue her career at Wayne State. Heeres played at Ball State and then Tennessee, while Rutherford, Hamblin and Kiefer all played at Northwood. Carnell played at Aquinas College and is Corunna’s coach, and Fenton went on to play at Mott Community College. Fox played softball at Michigan State.

Midland Dow’s run at the Lower Peninsula Division 2 championship in the fall ended with a tie for third, thanks in part to another group of standouts. Sophomore Logan Yu finished 34-2 to make the singles wins list, while sophomore Vishagen Karthikeyan (30 wins), senior Michael McGaugh (29), sophomore Jonathan Song (28) and junior Shubhan Nagarkar (28) all made the single-season doubles wins list.

On Dec. 22, for the second time in five seasons, Otisville LakeVille Memorial tied the most meet points scored in a 14-weight dual. The Falcons defeated Essexville Garber 84-0 with pins at every weight.