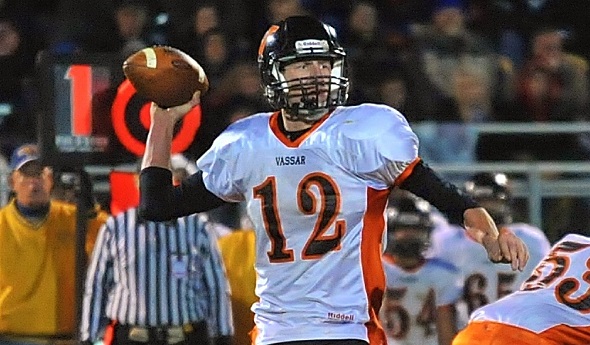 Humpert quarterbacked the Vulcans’ football team to one of its most successful seasons in school history in 2015, an 8-2 finish with a return to the playoffs after two seasons away. He made the MHSAA records with 445 passing yards in a 56-21 win over Cass City in Week 6, and for 2,197 passing yards and 153 completions total over those 10 games.

In addition to his football contributions, the 6-foot-7 Humpert finished a four-season basketball career in 2016 with 733 rebounds over 86 games, good to make the MHSAA career list in that category. He averaged 8.5 per game over his career in addition to 10.3 ppg. He currently plays football at Saginaw Valley State University.

Click to see the football and boys basketball record books in full and the headings below to see all listings for more sports with recent additions: baseball, girls basketball, football, boys and girls soccer, softball and volleyball.

Birmingham Groves finished 31-10 this season, making the MHSAA record book with a team total of 48 times hit by pitches. Twelve players were hit by a pitch at least once, with a team individual high of 12 HBPs.

Gaylord St. Mary became the first team in MHSAA history to intercept seven passes in one game, doing so in a 30-6 win over Bay City All Saints on Sept. 1. Four players contributed to the total: Brady Hunter had three interceptions, Alex Cherry had two, and Andrew Greif and Drew Long each had one.

Lincoln Alcona junior Conner McCoy upped his MHSAA single-season saves record this past fall while also making the single-game saves list twice. McCoy, who formerly set the single-season record with 391 as a sophomore in 2015, had 401 saves in 24 games this season. Along the way, McCoy had 35 saves in a District win over Saginaw Nouvel and 34 in a loss to Tawas early in the regular season.

Kylie Lanser earned McBain Northern Michigan Christian’s first entry into the girls soccer record book with 30 goals in 18 games as a senior last spring. She had a game high of four.

Schoolcraft’s Lydia Goble amassed nine record book listings over her first two seasons, placing her name in five categories. Most notably, she had eight RBI in a game as a freshman in 2015, tying for eighth most on that list, and her 73 RBI in 35 games last spring as a sophomore rank 10th all-time for one season. Goble plays shortstop and also is listed for 17 doubles and 12 triples as a freshman and 13 home runs a year ago.

Adair Cutler and Paige Porter joined the Lansing Christian varsity during their freshman seasons and finished their careers in the fall among the state’s top offensive achievers. Porter had 589 kills in her final campaign to make the single-season list and 1,464 kills to make the career list in that category. Adair made the single-match assists list three times (with a high of 54 in a 3-2 Regional Semifinal win on Nov. 8) and the career list with 3,300 – which ranks 17th since the start of rally scoring in 2004-05. Cutler also made the single-match aces list with 10 three times, the season aces list twice (with a high of 156 as a junior) and finished with 396 career aces, which rank seventh all-time. Cutler has committed to continue her volleyball career at Hope College, and Porter has signed with Spring Arbor.

Reese Weslow’s 31 kills in a five-set win over Lowell were enough to make the single-match list and helped Grand Rapids Forest Hills Central secure first place in the Ottawa-Kent Conference White. Weslow is a senior.

The Schuitema sisters have owned the setter spot at Grant this entire decade, and both now have entries in the MHSAA record book as well. Both were added for single-match assists – current senior Sierra Schuitema with a high of 57, and 2014 graduate Summer Schuitema with a high of 46. Sierra made the single-season list in that category with 1,302 this past fall, and both made the career assists list with 3,987 over four seasons for Sierra and 2,524 over three seasons for Summer. Summer also made the single-match aces list with 12 in 2012 and both made the single-season aces list – Summer with a high of 151 in 2012 and Sierra with a high of 115 in 2015. They couldn’t get closer on the aces career list; Sierra had 388 and Summer 387. Sierra’s career assists rank fifth since the start of rally scoring, and the sisters rank eighth and ninth, respectively, in career aces. Summer Schuitema plays for Campbell University in North Carolina. Sierra has signed with Cedarville University in Ohio.

PHOTO: Vassar’s Tyler Humpert looks for an open receiver during the Vulcans’ 2015 playoff game against Ithaca. (Click to see more at HighSchoolSportsScene.com.)