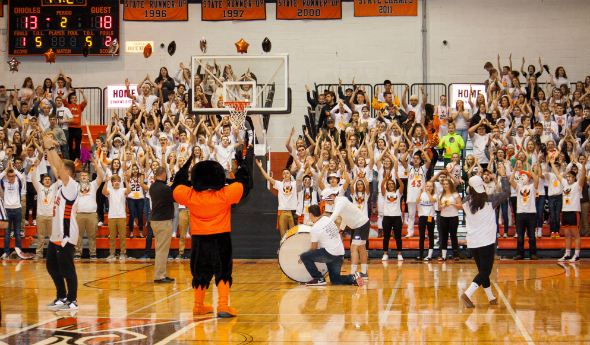 On social media and written at the bottom of its itinerary for the night, Charlotte’s Flight Club made perfectly clear what Saturday’s Battle of the Fans visit meant to a student section that while only a few years old has quickly become one of Michigan’s most accomplished – and is striving to become known as the state’s best.

Students filled stands covering one end of the court at Charlotte’s “Dome” as we enjoyed the third of our five-visit tour on a night saluting local law enforcement.

The breakdown: In two years, Charlotte’s student section has come from nonexistent to become a two-time BOTF finalist. As we learned during our 2016 trip, it was hatched during a series of January 2015 snow days, when student leaders took advantage of the break by meeting and forming a Flight Club to give more support at first to the school’s basketball teams and then to all Orioles athletes. The section gained steam over the course of last school year and especially last winter during a strong start for the boys basketball team, and despite graduating nearly all of its leaders last spring returned in force this fall to become a regular part of student life at the school.

See our video below, followed by five reasons the Flight Club continues to take off.

1. They have been building – literally.

The Flight Club claims to have more props than any student section in the state, and it’s a strong argument. They sadly waved goodbye to the S.S. Flightanic – a rolling boat they featured last season – after it ran aground in storage. But section leaders came back in August with their tools and paint cans ready. They built a giant “bird cage” out of PVC pipe to house Charlotte’s football teams at their field entrance before they busted out before games this fall. They created a second giant tifo (a.k.a. giant banner seen in photo below) that makes trips to most big games. And we enjoyed watching again as a member of the Club popped from the homemade oversized jack-in-the-box rolled out after the third quarter. A fan slip-n-slide set up for an early football game didn’t really take off, but most of the rest have been big winners – including the face-paint station in one corner of the gym where anyone can get made up to further show support.

As noted above, the Flight Club is barely two years old but quickly has grown into a force – and especially this school year as it’s become more organized. They received a new “nest” (our word, not theirs), a classroom where they store their many gizmos and gear and plan their work. White boards on one wall were loaded with lists and maps of the gym showing which sections of fans would sit where Saturday, while newspaper clips detailing their successes filled a bulletin board on another wall and a mural created by section co-creator and 2016 graduate Lindsey Carlson hung next to a letter sweater formerly worn by the dad of faculty section adviser Tyler Bartolacci, a 2007 grad. Section leaders now attend meetings every Monday and others as needs arise, created an itinerary for Saturday that was sent around on social media before the game, and members of the section proudly wore around their necks “boarding passes” – not that they needed identifying, but a neat show of solidarity nonetheless.

And leaders are still giving “Flight Club” lessons – videos over Twitter to show some of the cheers they’ll use at future events.

Be ready for tomorrow!!!! pic.twitter.com/TgbBGSTxxt

3. The pilots guide them home.

Last year, section leaders patrolled in front of the section – “flight attendants” showing the way. Taking the reins during games this year are “pilots,” one on each side of the baseline, standing on risers, megaphones in hand to provide the direction for all to hear and see. On Saturday, new leaders stepped up every quarter to guide the section and unify it for some awesome chants including a drum clap during the first half that will be a highlight of this year’s BOTF tour.

4. They’re making ‘highlights’ along the way.

Most schools with student sections can count on seeing them at football and basketball games. Starting in the fall, the Flight Club selected “highlight games” in every sport to also cheer – and not just for the more popular spectator sports like volleyball or soccer. The Club has cheered at girls and boys swimming & diving meets and at a hockey game this winter despite having only one Charlotte student on a co-op team with Lansing Catholic, Mason and Lansing Christian players. The first highlight game was a girls golf match during the fall, where 10 members of the Club cheered from the clubhouse as their classmates played the ninth fairway. And they packed local Char Lanes for a Neon Out and lots of “Strike, Strike, Strike” for a bowling match. “A lot of kids on the bowling team were really excited to see us there,” Rosekrans said. “They were talking about it the whole next week: ‘Thanks for coming. That was awesome.’” 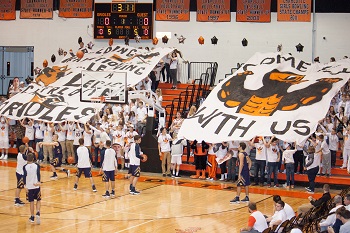 Purpose. Respect. Integrity. Dedication. Excellence. PRIDE is a school motto, and a large board near the gym doors explains how students should be guided by those qualities in the classrooms and hallways. But Club members also have a lot of pride (the non-acronym meaning) in their school, and have risen as a giant in fan support at a time when Charlotte’s most recognizable sports teams aren’t having a ton of success. Driving their athletes to do their best only makes the Flight Club cheer louder. Students filled multiple spectator buses for football games, load the stands for basketball games, have worked closely with the middle school’s “Junior Flight Club” that also got organized this year, and had no doubts about making another run at Battle of the Fans after making an impressive debut but coming up short of the title in 2016. “Everyone has a ton of fun at the games,” Rosekrans said. “I think they naturally thought, let’s do it again next year.”

Setting themselves apart: “We kept seeing what we could do to make us champions,” Ramos said. “We wanted to know what would set us apart, and we spent a lot of time thinking about that and trying to see what we did last year compared to this year that we wanted to do differently.”

Memories made: “I made a lot of great memories just through the Flight Club, especially this year with football,” Seavolt said. “It’ been a lot to remember.”

Just say the word: “Get the community involved. People want to come to the games. They just don’t know about it all the time,” Rosekrans said. “Social media. Tell people. Literally, that’s all it is. The power of talking to someone is very underestimated.”