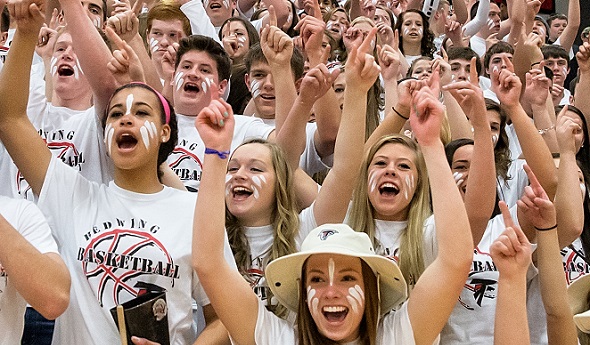 The bigger battle is coming. Contenders now must prove they are up to the challenge.

Nine student cheering sections from MHSAA member schools have been selected to continue on in this year’s “Battle of the Fans VII” contest by taking part in an inaugural “Challenge Round” as they vie for this year’s championship recognizing the top section in our state.

This year’s nine semifinalists are Cedar Springs, Petoskey and Traverse City West from Class A, Boyne City, Buchanan and Charlotte from Class B, and Munising, Negaunee and Pellston from Class C/D.

Battle of the Fans, organized by MHSAA staff and its 16-member Student Advisory Council, was revamped this year to allow for more schools to remain in title contention past the application round. As in past years, schools again were invited throughout the fall to submit short videos, via YouTube, of their cheering sections in action, with the deadline Jan. 13. However, instead of then choosing five finalists as in past years, the Advisory Council selected nine semifinalists to accomplish a list of tasks showing off their sections over the next 12 days – and the Council will then select three finalists for MHSAA visits.

This year’s winner will be announced Feb. 23 and recognized March 23 at the Breslin Center.

Five elective challenges (taken from a list of 15 opportunities) will allow semifinalists more opportunities to show the unique characteristics that make their sections elite. Click for descriptions of all 20 challenges.

“Our Student Advisory Council wanted to keep more of these great student sections involved in Battle of the Fans longer, and also make sure our best sections were showing their best on more than just the days they applied and we visited,” said Andy Frushour, MHSAA director of brand management and advisor to the Student Advisory Council. “The ‘Challenge Round’ sets up a true competition as these nine schools watch and try to outdo each other’s best work over the next 12 days. We’re excited to watch them step up their games to answer the competition.”

Below is a playlist of all 19 application videos. Click to see each individually.

A total of 19 schools applied for this year’s contest – seven from Class A schools, six from Class B, four from Class C and two from Class D. Three semifinalists each were selected from the Class A, Class B and Class C/D applicants.

The Student Advisory Council will select the finalists for announcement Jan. 29 on Second Half. MHSAA staff and Student Advisory Council members will visit all three finalists for home basketball games during the second half of this regular season, with coverage and video from those visits and the announcement of the winner all to be published on Second Half.

The winner will be selected by another Advisory Council vote based in part on activity on the MHSAA’s social media sites. All social media postings regarding Battle of the Fans VII should include the hashtag #BOTF. The MHSAA will share semifinalists’ challenge posts over the next two weeks on its Facebook, Twitter and Instagram sites and Snapchat feed. The MHSAA also will post from the three finalists visits on those channels.

This year’s applicants brought the total number of schools that have entered the contest at least once to 91, with Ann Arbor Gabriel Richard – a finalist in 2013 – the only school to apply all seven years.

Among semifinalists, Buchanan and Traverse City West both have applied five times and Petoskey has applied four. Charlotte has applied three times, and Boyne City, Cedar Springs and Munising all have applied twice. Negaunee and Pellston were two of six first-time applicants, as were Coldwater, Elkton-Pigeon-Bay Port Laker, Essexville Garber and Mason.

Buchanan was named BOTF champion in 2013, and Traverse City West earned the title in 2016. Boyne City, Charlotte, Munising and Petoskey also have been selected as finalists in the past.

The contest is sponsored in part by the United Dairy Industry of Michigan, which promotes Michigan's locally-produced dairy products and nutrition education. Rules plus links to past years’ coverage of the contest can be found on the MHSAA website.

PHOTO: St. Johns fans cheer on their boys basketball team during the 2015 Battle of the Fans finalists tour.