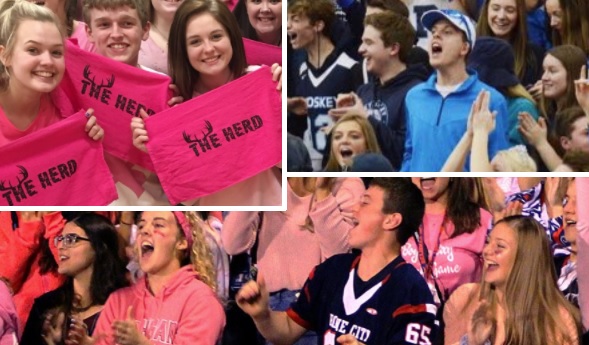 Two repeat finalists and a past champion have earned the opportunity to vie for the Michigan High School Athletic Association’s “Battle of the Fans VII” title recognizing the top high school student cheering section in Michigan, as awarded by the MHSAA’s Student Advisory Council.

Boyne City, Buchanan and Petoskey were selected as finalists by the Advisory Council from a group of nine semifinalists that took part in a series of social media challenges highlighting their sections over the last two weeks.

Members of the MHSAA staff will visit all three finalists over the next three weeks, producing articles about each section and videos of those sections in action, all to be published on the MHSAA’s Second Half.

The winner will be selected by another vote by the 16-member Advisory Council, with serious consideration given to a public vote on the MHSAA’s social media sites. This year’s winner will be announced Feb. 23 and recognized March 23 at the Breslin Center.

“Our ‘Challenge Round’ over the last two weeks added a lot of excitement to Battle of the Fans, and also gave us great insights on the finest student sections in our state,” said Andy Frushour, MHSAA director of brand management and advisor to the Student Advisory Council. “We’re excited to go back to see three sections that have shown us a ton in the past, and checking out a couple of northern neighbors is an incredible way to kick things off.

“Charlotte and Cedar Springs were very close to becoming part of this year’s finalists tour,” Frushour added. “Both have established incredible fan cultures, and we certainly plan on seeing them in this contest again next year.”

Battle of the Fans, organized by MHSAA staff and the Student Advisory Council, was revamped this year to allow for more schools to remain in title contention past the application round. As in past years, schools again were invited throughout the fall to submit short videos, via YouTube, of their cheering sections in action. The Advisory Council then selected nine semifinalists to accomplish a list of tasks showing off their sections over a 12-day span.

A total of 19 schools applied for this year’s contest – seven from Class A schools, six from Class B, four from Class C and two from Class D. Three semifinalists each were selected from the Class A, Class B and Class C/D applicants.