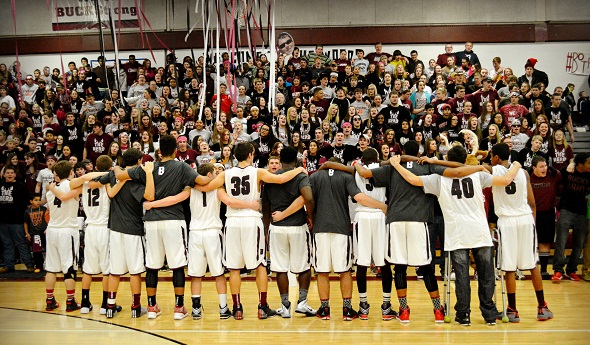 BUCHANAN – Andi Frost might be walking the hall between classes with some of her senior friends when a freshman will approach and ask about the next theme night.

Or a quick trip to the gas station could turn into a conversation with locals about what she and her classmates have planned for Friday’s basketball game.

Once, during a trip to a few miles south to Steak & Shake in South Bend, a patron from across the border noticed her “Herd” shirt and asked if she was from Buchanan.

Plenty of notice has come this small town’s way since “The Herd” student cheering section won last year’s MHSAA Battle of the Fans II. No question, the championship helped some find the small southwestern school on the map – including one Twitter follower who made contact from Nebraska.

The recognition has been fun and the friendly comments from all over the state much appreciated. But the best to come from last year’s formation of The Herd, without doubt, is the sense of togetherness that was cultivated in the bleachers but has infused the entire community.

“The best thing that happened from this whole experience is that it’s even higher than a title now,” Frost said. “It’s our way of life in Buchanan. It’s the whole school, all the teachers, everyone in the community. Grandparents, moms, dads and little brothers; it’s the whole town.

“You sense it in the building; we’re not just a school with different grades. We know everybody now. Everybody has become a big family.”

Buchanan on Friday was the first stop on this season’s Battle of the Fans III finalists tour. MHSAA staff and Student Advisory Council members will visit Beaverton, Bridgman, Frankfort and Traverse City West for home games later this month and during the first two weeks of February. The winner will be determined by an Advisory Council vote weighted by a public vote on the MHSAA’s Facebook, Twitter and Instagram sites from Feb. 18-20. The champion will be announced Feb. 21 and recognized March 21 during the Boys Basketball Semifinals at Michigan State’s Breslin Center.

Buchanan’s Herd got its start during an MHSAA Sportsmanship Summit during fall 2012 after a presentation on the benefits of a positive, fun student cheering section and the Battle of the Fans contest in particular. 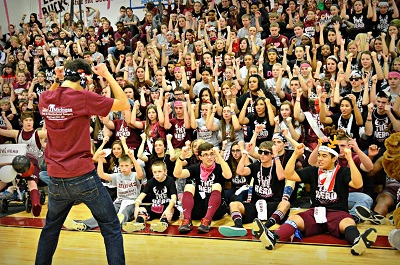 Section leaders and teacher “shepherds” did some quick work to make The Herd formidable – and start the ball rolling toward a culture change in the school and a new unity felt throughout the town of roughly 4,500 residents.

This school year, The Herd came back – and this time much more organized.

Nearly 40 students showed up for the section’s first meeting last spring as it looked ahead to 2013-14. A group of roughly 60 – or 13 percent of the student body – came to another planning meeting over the summer.

Leaders of the section realized early that with so much interest, organization would be key. They split their classmates into small groups and gave each a task – coming up with theme night ideas, new cheers or planning pep rallies or “traveling pep rallies” to the middle and elementary schools.

What emerged was a fall schedule that included plans for attending not only home football games, but also Herd gatherings at volleyball and soccer games and a cross country race. The section has a full line-up for its home basketball games, both boys and girls, including individual cheers for every player and 22 cheers/chants/dances to break out during time-outs.

“We’ve made such a big deal out of all of this, there’s such good positivity everywhere, and everyone just loves it. So we definitely want to keep it as a tradition,” said junior Ellie Hurd, also a section leader last year as a sophomore.

One of the reigning champ’s biggest challenges this fall was coming up with fresh material to blend in with some that leaders wanted to carry over from the section’s inaugural season.

Last year’s favorites are mixed with versions of more recently popular “Timber” and “Wrecking Ball.” Pregame introductions are still lights-out with Herd members providing cell phone spotlights. And the Herd continues to sing the national anthem before games, on this night with Frost on the microphone leading the crowd.

Perhaps the most compelling part of Buchanan’s victory story in 2013 centered on one of the section’s main motivations – the untimely death the summer before of classmate Dilan Shearer. Another challenge this past summer was deciding how best to continue on while keeping intact the togetherness that sad event helped create.

Similar to last season – when the section finished game nights by singing Shearer’s favorite song, “Springsteen” – every home night this winter ends with another community song – Jason Aldean’s “Tattoos On This Town.”

The Herd isn’t just about showing up strong at games. They’re frequently called to show up at events in the community and have used their powers of influence to help their neighbors – raising roughly $1,300 plus clothing donations after a local apartment fire and a few thousand dollars to assist community supporter Don Ross, who died Thursday after suffering from Lou Gehrig’s Disease.

“We’ve built everlasting memories,” Martinez added, “just by all of the stuff we’ve done with The Herd.”

Filling the stands for every home varsity hoops game meant five nights of basketball last week. But the Herd showed en masse, and it’s fair to believe made a difference – the boys team in particular hasn’t lost a home game since the first of 2012-13 and came back from 20 points down to beat a rival earlier this season.

When senior A.J. Reed’s seventh grade brother told A.J. he was considering leading The Herd in high school instead of playing basketball, A.J. was stunned (and told his brother to stick with his sport). But in just over a year, the section has established that level of presence within the school.

“Traditional high schools, you think about if they have a good football team or a good basketball team every year,” said Reed, who like other section leaders plays at least one sport. “I think when a lot of people think of us, now recently, they’ve thought of the student section. It’s almost like a sport to us. We are a team.”

PHOTOS: (Top) Buchanan's "Herd" and its boys basketball team gather for "Tattoos On This Town" after Friday's win over Niles Brandywine. (Middle) Members of the student section lock in for a rollercoaster ride during halftime Friday. (Photos courtesy of Jessica Cornelius.)