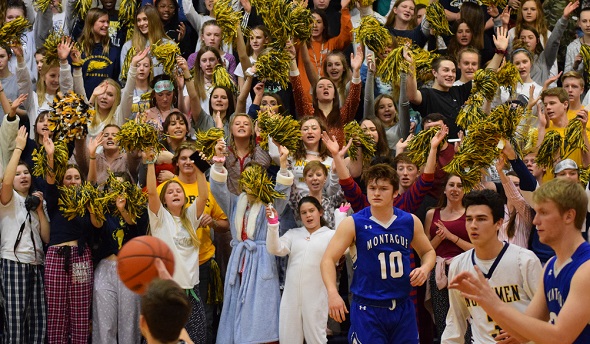 North Muskegon senior Kendal Hoppa grew up watching the older kids in her town cheering on their friends at high school games, a sports-based extension of the close-knit community.

And what she’s known about Norse Nation for years, the rest of Michigan now knows as well.

The Nation already was a force when it came to student support. But she and her classmates showed this winter what a dedicated section can become with organization and a bit more intention – and they can celebrate what they’ve built with the Battle of the Fans VIII championship. 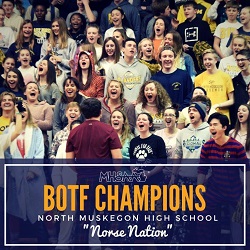 “The biggest thing is our sense of school pride,” Hoppa said. “We are there supporting the basketball team, we are supporting our family, and I think that really rubbed off on the schools we’ve competed against and any other community members who came to watch us.

"I’ve noticed an immense growth in schools in our conference and schools that we’ve played against having student sections of their own now – ‘We want to be like North Muskegon. Let’s organize this student section.’ It’s been awesome for our community and also communities around us as well.”

North Muskegon will accept its Battle of the Fans VIII championship banner during halftime of the first Division 2 Boys Basketball Semifinal on March 15 at Michigan State University’s Breslin Center. Buchanan and Saginaw Heritage also have been invited to Breslin to be honored for this season’s achievement.

North Muskegon was chosen based on a vote by the MHSAA’s 16-member Student Advisory Council influenced by public vote on the MHSAA’s Facebook, Twitter and Instagram sites. A total of 9,875 social media votes were received – and increase of more than 6 percent over last year’s contest – with those results then equated against a school’s enrollment. This year’s results came out to 4.3 votes cast for every student attending one of our finalist schools.

North Muskegon totaled the most public social media support and finished first across four of five ways votes were accepted (Facebook likes and shares, Twitter re-tweets and likes and Instagram likes). Votes were scaled to take into account a school’s size – a vote for Class B Buchanan was worth more than one for Class A Saginaw Heritage, for example – and North Muskegon’s voting totaled higher than that of the other two finalists combined.

Other numbers to consider from this season's contest: The application videos have been watched nearly 12,500 times, and the MHSAA-produced videos from our tour stops have nearly 1,900 views. The stories detailing the three tour stops plus Tuesday’s explanation of how to vote and the announcements of semifinalists and finalists had been viewed 6,500 times as of 8:30 this morning. The three Instagram stories covering our visits were viewed nearly 6,000 times combined.

Below are our final takeaways from each of those trips.

What we saw: There’s a reason – or many – the MHSAA has visited Buchanan for Battle of the Fans more than any other school. Once again, we saw what has made The Herd the gold standard for student sections statewide. Interaction with the game from start to finish, even as victory slipped away. Participation by students who obviously are involved in this all year and know the chants, songs and dances that have been passed down over the years. Leaders taking charge up front, but fun flowing from the section all the way to the top bleachers. As we mentioned in our report Monday detailing last week’s visit, it was like a Herd “Greatest Hits” performance, and we’ve had a lot of great memories visiting Buchanan over the years. This reminded us of those good times.

Why we’re fans: After Friday’s game, senior leader Garret Lollar told us he and his classmates would be happy today win or lose. And there was no doubt he was being completely honest. Buchanan has been the BOTF champion twice, including last year – but students and their dedicated teacher leaders have figured out that the culture of family and fun that has become part of this school district from elementary through the high school is a guaranteed win every time The Herd comes together.

What we saw: The Hawk’s Nest was a first-time finalist, and this section has come a long way over the last few years thanks to a dedicated teacher and students who bought into an opportunity to become something big. Heritage has been riding the momentum from last season’s Class A girls basketball championship run, and for our visit filled the student section for one of the girls team’s biggest matchups of this winter, against rival Midland Dow. There was a pep band, multiple pompon teams and the biggest group of student supporters we saw despite the boys basketball and hockey teams playing on the road. Heritage has found something special, and we’ll no doubt be returning for a BOTF in the future.

Why we’re fans: Section strategy and ideas are hatched in the school’s “Leadership Development” class. With half the student body taking that or the leadership intro course at some point, there is substantial continuity to go with the necessary planning for corralling such a large group. The multi-media presence – regular videos document all of the cool things the section is doing and also are used to rev students up for more to come – was one of the strongest we’ve seen over the course of BOTF. We met with leaders from the senior, junior and sophomore classes, and this could be just the start for the Hawks – albeit, a championship-caliber one.

What we saw: An effort with the humblest of beginnings – two students on a cross country bus ride home bouncing ideas – turned into an awesome display of support that long has been a source of pride in the school and community. We’ve seen a lot of student sections over the years – and there have been times when we feel like we’ve been watching more of a performance than students cheering for their classmates at a game. But Norse Nation was locked into the game from start to finish, with game-appropriate cheers throughout, and most of all the fun was genuine. Some things didn’t work – a pillow fight during halftime never really came together – but it wasn’t a big deal. Everyone was having a good time, and when the game was back on, so was the Nation. 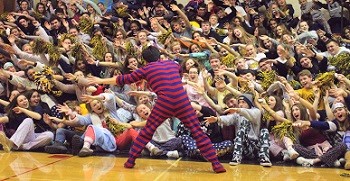 Why we’re fans: There’s so much here that can be used to teach others as they build a student section. Some are the products of being a small community – there definitely is a family feel because the high school has only a few hundred students and all grades are housed in the same building. But those hallway connections have resulted in a strong student-driven effort – almost like a student council for the cheering section – where all are welcome and all ideas are considered. And we’d be failing if we didn’t mention this section too relies on serious mentorship from a supportive principal, another must.

Norse Nation has taken pride in how it’s supported its teams for years – and Battle of the Fans provided a vehicle for the school to share what it does so well with the rest of Michigan. Norse Nation also should inspire student sections around the state to take another step – and enjoy how quickly they can reach that elite level of fun.

"Definitely get into it, be in the moment," Hoppa said. "Be a part of the student section. Be part of supporting your school.

Check out below our stories and videos behind the finalists. Also, click to see student-produced videos from all sections that entered the contest. (Photos courtesy of the North Muskegon yearbook staff.)

Read all about it: Have You Herd? Buchanan Parties On

Read all about it: Norse Nation Roars North Muskegon Pride

Read all about it: Heritage's Hawks Nest Wants You 'Hype'