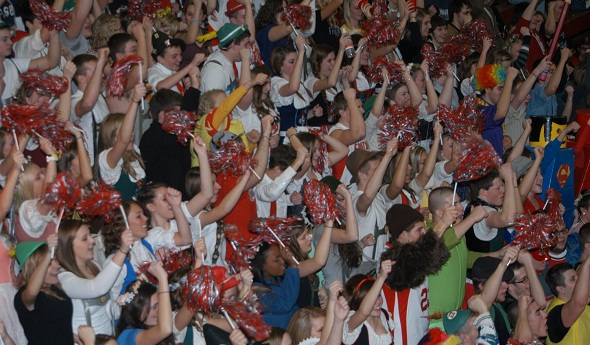 We are going to dance and have some fun.

That was hardly the entire story behind this season’s inaugural MHSAA “Battle of the Fans” champion.

But energy – from the opening tip to the final buzzer and despite a blowout win decided early on – is what set Frankenmuth High School’s fans a notch above four other finalists in this season’s search to find Michigan’s top student cheering section.

"It's kinda what we wanted to do when we started out. We really wanted to be the biggest, the best, the most creative, the loudest, the most outgoing. And that's obviously what we've done now," said Frankenmuth senior Brennan Webb, one of the section's founders and leaders. "I could tell since we started doing this last year and this year, people started bringing better student sections to games against us because they knew we were going to bring (fans). We influenced all the teams we've played. It's really awesome. You feel good."

When it came to atmosphere -- positive, festive and fun -- the Eagles started early and didn't stop until long after the final buzzer sounded.

Frankenmuth was chosen based on votes both by the MHSAA’s 16-member Student Advisory Council and a public vote on the MHSAA’s Facebook page. More than 8,500 fans voted in the MHSAA Facebook poll, with those results then equated against a school’s enrollment.

Based on votes per student, Reese topped the Facebook poll, followed by Petoskey and Frankenmuth in third.The Student Advisory Council based its vote on the following criteria: positive sportsmanship, volume of student section, school spirit, originality of cheers, organization of group and student section leadership.

The SAC vote put Frankenmuth over the top.

Other numbers to consider from this season's contest: The 19 application videos have been watched more than 20,500 times, and the MHSAA-produced videos from our tour stops have more than 12,400 views. The message of sportsmanship and the benefits of a strong student section have been heard.

And here are a few common themes we saw -- and heard ourselves -- during the MHSAA tour of the five finalists over the last five weeks.

Bottom line: All five finalists are winners for simply getting involved. All brought something new and plenty of excitement to games that have been played for nearly 100 years in this state. And all deserve special recognition.

What we saw: The best halftime show in the state. Eagle Nation supports its team on the floor, but halftime belongs to the fans – and the Eagles deliver. Breaks are few and last maybe 20 seconds apiece. It’s like a show within a game; when the second quarter horn sounds, Eagle Nation hits the stage.

Why we’re fans: If the word is unity, the definition is Grand Rapids Christian. We visited on Neon Night, which was embraced by everyone – and not just the cheering section, but the players who came out for warm-ups sporting pieces of neon flare as well. Eagle Nation is more than 400 strong, and keeping that many fans organized and active for an entire game is a daunting task. But Eagle Nation pulls it off and sets the foundation for the future by meeting with middle school students to pass on their lessons in appropriate sportsmanship.

What we saw: The Blue Crew, as the section has been known for nearly a decade, didn’t mutter a negative word the entire game against West Branch Ogemaw Heights – a game, by the way, that clinched a league championship for the Northmen’s boys team. That, in itself, is laudable. And this section has more history than the other four finalists combined.

Why we’re fans: The Blue Crew builds support from all over, be it elementary and middle schoolers who gather at the sides of the section, or alumni and parents who add to the cause. Petoskey’s opponents are spread all over the northern Lower Peninsula – and the Blue Crew logs plenty of miles to keep up. The student council provides consistent and strong leadership. And don’t forget about the jazz band, which we felt was on par with any we’ve heard at college games.

All In Award: Reese’s Rowdy Rockets

What we saw: At Reese, the smallest community among our finalists, it’s truly a community effort. Nearly half of the student body filled the section during our visit, on top of the crew of parents, relatives and other residents who support the Rockets on a regular basis. Oh, and despite having such a small voting base, the Rockets rocked our Facebook poll with easily the highest percentage of voters compared to the size of the school’s student body.

Why we’re fans: The Rowdy Rockets get going early – and keep going all game. The pre-game announcement of “Hey Rockets, guess what? It’s game time,” sets the tone for the rest of the night. And Reese did some things that bigger schools probably couldn’t pull off, like creating a tunnel for the players as they entered the gym and staging a class-vs.-class tug-of-war during halftime.

What we saw: What seemed like a thousand fans in black T-shirts blocking out an entire side of Rockford’s gym. The number was closer to 500, but the magnitude was obvious; Rockford is the biggest school among the finalists, and represented as such.

Why we’re fans: Rockford’s lights out introductions (watch the video to see it) easily was our favorite gimmick – which makes sense if you’ve also seen the video of their baby powder explosion during football season. Ram Nation has great ideas and executes them. And they get a special shout out for making every home game a fund raiser for some charity – the support from Ram Nation extends to its athletes, but outside the building as well.

But there can be only one winner. Drum roll, please ...

Battle of the Fans Champion: Frankenmuth

What we saw: All five finalists created an atmosphere of fun. But Frankenmuth’s defined festive. No finalist rallied from start to finish like the Eagles. The other four finalists brought a number of positives to the table. Frankenmuth combined them all.

Why we're fans: Everyone is invited. That’s become a theme of Frankenmuth’s section, which encourages participation from not just other Eagles fans, but opposing fans as well.

They danced a lot and sang some too, but were into the game the entire time. Frankenmuth’s cheerers had specific cheers for each player, for free throws, for pre-game introductions and just about anything else that goes into a basketball game. And like Petoskey, not a negative word was heard -- unless the Eagles fans were making fun of themselves or their players for air-balling a shot or getting one blocked.

We visited for a theme night, which would be a big hit on its own. But leaders kept the full section engaged for the entire game.

And talk about creative ... a lot of sections do great things that they've never seen before -- but we have. Not so at Frankenmuth, where originality reigned.

"I hope we can start a really huge tradition for our school. I hope people look at this and follow along with what we've done, and keep this tradition going forever," Webb said. "People will know this is how it started, and this is how it's going to be."

All five finalists will have another day on a bigger stage – clips from all five MHSAA tour stops will be shown during the Girls and Boys Basketball Finals in March at the Breslin Center.

And all five will serve as examples of what a great thing a student cheering section can be -- and how other schools can do the same in years to come.

Congratulations to all of our finalists, and especially to our champions.

Click to check out our the stories and videos behind the finalists. Also, click to see student-produced videos from all 19 sections who entered the contest. Photo courtesy of the Frankenmuth News.