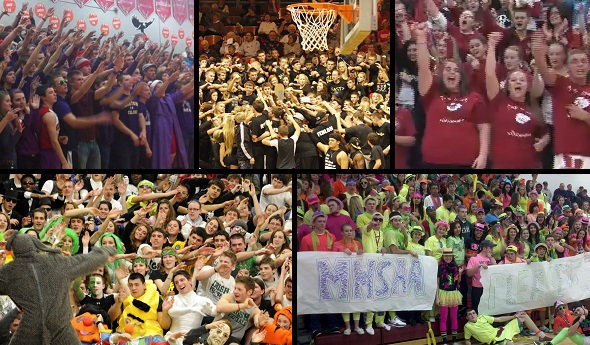 The champion is back. But the competition is all new and no doubt hungry to become known as the best cheering section in Michigan.

Reigning champion Frankenmuth along with Ann Arbor Gabriel Richard, Buchanan, Vandercook Lake and Zeeland East have been selected as finalists for this year's "Battle of the Fans II," which for the second year aims to recognize the top MHSAA student cheering section.

The contest, organized by MHSAA staff and its 16-member Student Advisory Council, will reward the cheering section that best creates the positive and festive atmosphere made possible when students show enthusiasm, togetherness and sportsmanship while rooting for their team. MHSAA staff and Student Advisory Council members will visit all five finalists for home games during the second half of this regular season, with coverage and video from those visits and the announcement of the winner all to be published on Second Half.

The winner will be announced Feb. 22, and video of all five sections will be played on the Breslin Center HD scoreboard during the Finals in March. The champion also will be recognized during the Boys Semifinals on March 22.

Schools were invited in December to submit a short video, via YouTube, of their cheering sections in action. Video submissions included explanations on how each section met the following contest criteria: positive sportsmanship, student body participation, school spirit, originality of cheers, organization of the group, student section leadership and overall fun. Click the links below to see the finalists' application videos.

A total of 27 sections – including 24 first-time applicants – submitted videos by last week’s deadline. The finalists were chosen by the Student Advisory Council, and the winner will be selected based on the results of a public Facebook poll and another Advisory Council vote.

Finalists will be visited for the following home boys basketball games:

Contest rules plus links to last year’s coverage of the contest can be found on the MHSAA BOTF site.