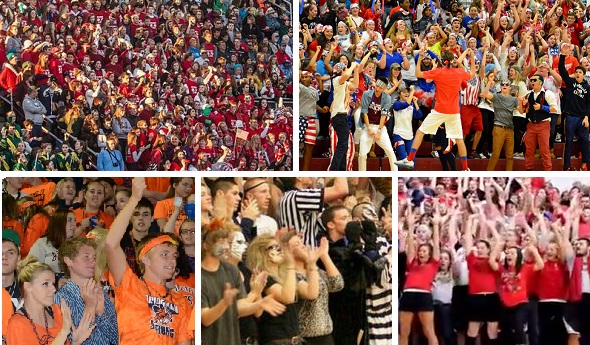 Buchanan is back to defend its title. But rival Bridgman would love to be the next to hoist the championship banner. And Beaverton, Frankfort and Traverse City West plan to show the best cheering in Michigan isn't reserved for the state's southwest corner.

Those five finalists have been selected for the Michigan High School Athletic Association’s “Battle of the Fans III,” which will again recognize the top student cheering section from among member schools with the winner crowned in March during Boys Basketball Finals weekend at Michigan State University's Breslin Center.

The contest, organized by MHSAA staff and its 16-member Student Advisory Council, will reward the cheering section that best creates the positive and festive atmosphere made possible when students show enthusiasm, togetherness and sportsmanship while rooting for their team.

MHSAA staff and Student Advisory Council members will visit all five finalists for home games during the second half of this regular season, with coverage and video from those visits and the announcement of the winner all to be published on Second Half.

Schools were invited in December to submit short videos, via YouTube, of their cheering sections in action. The winner will be announced Feb. 21, and video of all five sections will be played on the Breslin Center HD scoreboard during the Finals in March. The champion also will be recognized during the Boys Semifinals on March 21.

“The Battle of the Fans continues to influence positive cheering at schools throughout the state, and we were excited to see videos come in both from first-time applicants and schools that were not selected in 2013 but came back with strong efforts again this winter,” said Andy Frushour, MHSAA director of brand management and advisor to the Student Advisory Council. “These student sections create a buzz that takes hold of the entire community. The finalists tour is something MHSAA staff look forward to every January, and we’re excited to see what schools have come up with for 2014.”

The finalists were chosen by the Student Advisory Council, and the winner will be selected by another Advisory Council vote based in part on activity on the MHSAA’s social media sites. All social media postings regarding Battle of the Fans III should include the hashtag #BOTF. The MHSAA will post throughout the finalists tour on its Facebook, Twitter and Instagram sites.

Bridgman and Traverse City West both were applicants in 2012 as well. St. Joseph’s student section was the closest to making the finalist cut this year, just missing with a sixth-place finish in the initial Advisory council balloting. Petoskey, a 2012 finalist, finished seventh.