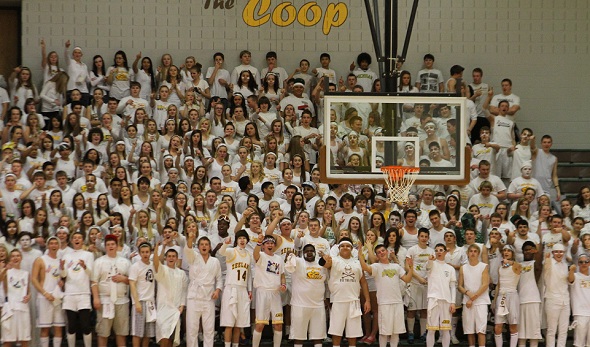 ZEELAND – Trent Courtright’s voice was gone, and his face paint mostly had washed away by the end of Friday’s Zeeland East boys basketball game against Muskegon Mona Shores.

He predicted he’d sleep well that night, reveling in another Chix victory and the part he and his classmates played by cheering them on.

It was just another night in “The Coop,” home of Zeeland East’s raucous student cheering section.

“We had a lot of fun out there. We love supporting our guys. It’s all worth it for the Coop,” Courtright said. “We try to keep the intensity up no matter what the score is. We try to keep all the fans in the game.

“We just try to support our guys as much as we can and be as loud as we can.”

Nearly filling a section of stands seemingly cut out of the gym wall just for them, Zeeland East’s students stood roughly 250 strong during Friday’s MHSAA Battle of the Fans II visit. The Coop was the fourth stop on the MHSAA BOTF tour, following Frankenmuth, Vandercook Lake and Ann Arbor Gabriel Richard. The final trip, to Buchanan, is Friday, with voting on the MHSAA Facebook page to begin Feb. 19. The winner will be announced Feb. 22 on Second Half.

Don’t plan on the Coop taking any breaks until then, or for the rest of the season.

Be it during a halftime dance-off or sprints down the sideline after every Chix 3-pointer, just about every member of the Coop spent almost all 70 minutes of Friday’s game jumping, dancing, clapping, singing and chanting.

“If you go to a basketball game and you’re not a basketball fan, we want you to still be entertained,” senior Dan Rebhan said.

“There are a lot of pauses in basketball games, and football games too. We always try to fill those with a cheer, a little chaos – there’s been a couple dances, too.”

The Coop has been a Zeeland East tradition for a number of years, but has built toward this crescendo especially during the last three. 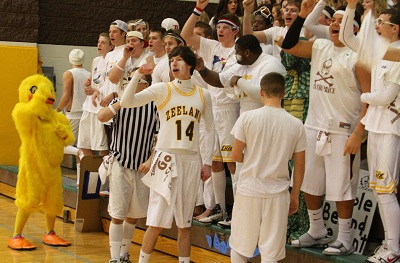 Coop leaders know they’re making an impression because of the comments they’ve received.

After a game at Grand Rapids South Christian in early December – when the traveling Coop was far outnumbered by the home student fans – Zeeland East’s students were greeted after by South Christian parents who applauded them for matching and at times exceeding the volume of the home crowd.

During another game this season, Holland Christian students answered another opposing student section by chanting, “The Coop was better.”

“Our whole community backs us.  I was at the gas station the other day in Holland, and there were two people in front of me that didn’t know me, and they were like, ‘Did you see that Zeeland East student section?  They were pretty sweet.  I think we should go over and watch one of their games,’” Courtright said. “And I was like (nodding my head and smiling).”

Zeeland East athletic director Tim Ritsema met with the section leaders at the beginning of the school year and told them about his experience as part of the Holland High student section in 1985-86. Ritsema explained that this year’s Coop belonged to these seniors, and it was up to them to make the most of it.

If a class was going to raise the Coop to elite status, these seniors made sense to take that challenge. Back when they were in junior high – and often to the surprise of opposing fans – Elzinga and some classmates would paint up and root on their middle school basketball teams. When Zeeland East finished Class B boys basketball runner-up in 2009, Rebhan and a few of his eighth-grade friends snuck into Breslin Center with high school student tickets, finally getting their first taste of being part of the Coop.

When the Battle of the Fans II was announced early this fall, Ritsema forwarded the information to Coop leaders and told them they should give it a shot.

All seven main leaders play sports – football, baseball, golf and track. The Coop is like their winter sport, and has allowed them to form friendships with classmates they didn’t necessarily know well before.

Zeeland East’s students have developed another tradition over the last two years that they fully expect to continue long after this group of leaders is gone.

The High Five Hallway started during the fall of 2012 as something funny done by a few of the seniors, who on football game days would give each other high fives and yell while intersecting in the hallway that leads to the doors and pathway between Zeeland East and Zeeland West, which sits adjacent to the Chix campus.

Students at the schools share classes throughout the day, so often a number of them are crossing between the two schools. Beginning during football season this fall, Rebhan on game days would re-enter East after his classes at West and begin a 10-second countdown. East students in the High Five Hallway would arrange in two lines facing each other, and spend about two minutes of the eight-minute break high-fiving each other while traveling the winding corridor.

It’s said there’s no drama in the Coop, just plenty of camaraderie. It starts in the High Five Hallway. Could it end with a Battle of the Fans championship banner?

“I was dating a girl from (Zeeland) West and I went over to her house the day after the East-West game. Her dad was talking to me about the Coop for like an hour,” Elzinga said. “He didn’t mention a thing about the game, except for that we won.  I was like, ‘West played really well,’ and he said “Yeah, and you guys looked like you were having a lot fun.’”

PHOTO: (Top) The 250-member Coop takes its place in the end zone bleachers during Friday's game against Muskegon Mona Shores.  (Middle) Trent Courtright (#14) leads the Coop in one of its many in-game cheers.  (Video Above) The High Five Hallway, as captured by students, before its Feb. 5 basketball game.  (Photos courtesy of Kurt Van Koevering, Zeeland Record.)