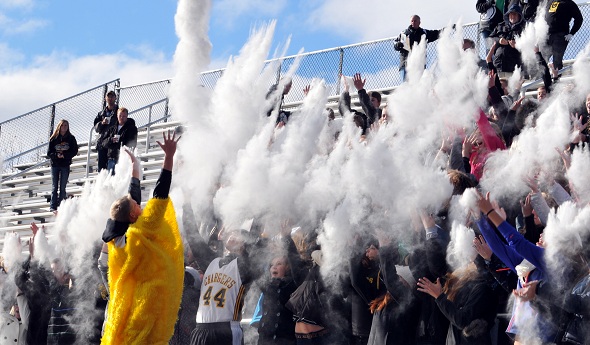 Brush up on your favorite chants, get the roller coaster rolling again and schedule those theme nights.

"Battle of the Fans" is back, and we're looking for your best as we begin our second quest to find the top high school student cheering section in the state of Michigan.

Following up on its successful inaugural contest last school year, the MHSAA's Student Advisory Council again will host “Battle of the Fans II” to reward the top high school student cheering section in the state again this winter.

Sections are invited to submit a short video, via YouTube, of their cheering sections in action. Video submissions should be between 90 seconds and three minutes long and explain how that section meets the following contest criteria: positive sportsmanship, student body participation, school spirit, originality of cheers, organization of the group, student section leadership and fun.

The deadline for student-submitted video applications is Jan. 12. Five finalists including at least one Class C or D school will then be chosen and visited on a home game night by MHSAA staff and Advisory Council representatives. The MHSAA will produce a video of that finalist after each visit, with the champion being selected by the Student Advisory Council based in part on a public vote to be conducted on the MHSAA’s Facebook page.

This year’s champion will be announced Feb. 22 and recognized March 22 at the Breslin Center. 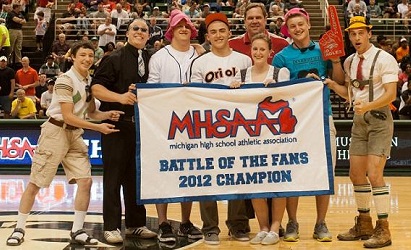 A total of 19 sections submitted videos for the 2011-12 contest. Frankenmuth was named champion and presented with a banner during the MHSAA Boys Basketball Finals at Michigan State University’s Breslin Center. Sections from Grand Rapids Christian, Reese, Petoskey and Rockford also were finalists.

And every one showed us something that goes into a strong student section. Click to read our final analysis from the day we announced the winner.

Contest rules and directions for submitting videos can be found on the MHSAA site. This year’s finalist videos, plus the announcement of the 2012-13 winner, will be published on Second Half. Click below for links to the finalist stories and videos from last year's MHSAA visits.

Make sure to keep up with the buzz on Twitter via our hashtag #BOTF, and follow us @MHSAA.