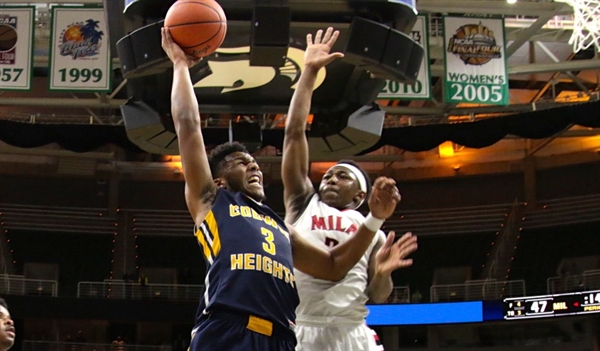 Click below for highlights from all four teams that took the court.

Perkins Blocks & Dunks - Nick Perkins starts this sequence for Milan with a block and then runs the court to take a pass for a dunk to put the Big Reds back in the lead. Wyoming Godwin Heights, however, prevailed 70-64.

Williams’ Lucky 13's - Michael Williams had 13 points and 13 rebounds for Wyoming Godwin Heights against Milan. Here he scores on a put-back late in the first half.

Going To Towns - James Towns paced Detroit Henry Ford with 24 points against Cadillac in a Class B Semifinal. Here he converts the old-fashioned three-point play.

Myers All The Way - Ethan Myers makes a nice play for Cadillac in the fourth quarter against Detroit Henry Ford, taking a rebound all the way for a basket. He had 13 points for the Vikings.

PHOTO: Godwin Heights’ Karon Patrick tries to get a shot around the outstretched hand of Milan’s Latin Davis.