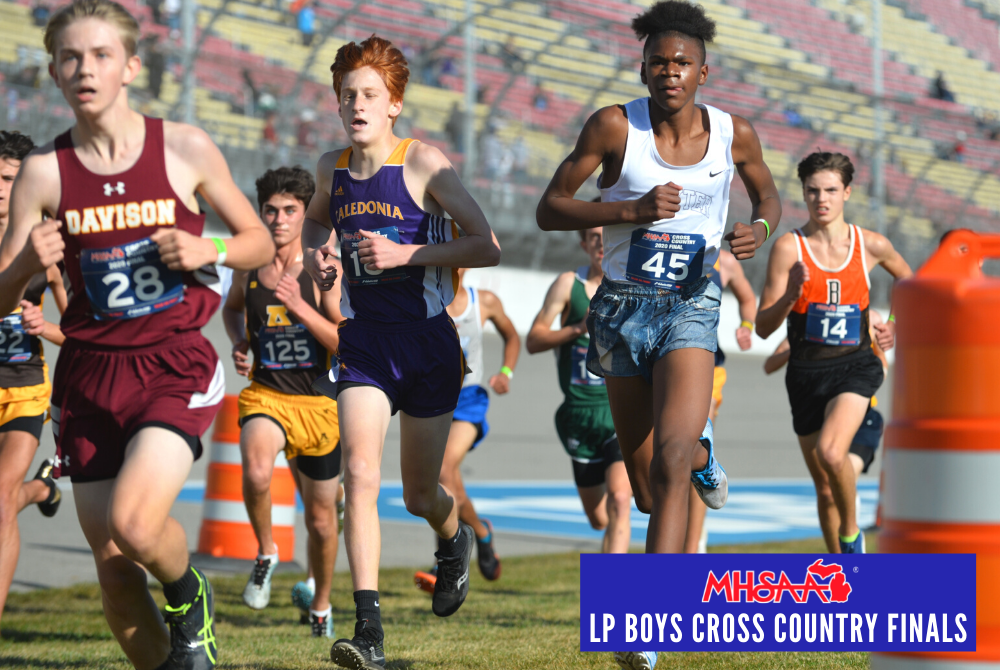 Otsego in Division 2 and Johannesburg-Lewiston in Division 4 are the top-ranked teams heading into the day, and both are seeking their first Lower Peninsula Finals championships. Caledonia is the top-ranked team in Division 1 and seeking its first title in 1996. St. Louis is No. 1 and won last year – but surely the Sharks will be up for celebrating a repeat as well.

Individually, Hartland’s Riley Hough will finish a high school career that has seen him rank among the state’s best all-time, and Pinckney’s Caleb Jarema and Benzie Central’s Hunter Jones are mere steps away from joining him.

The day’s first races at Michigan International Speedway begin at 9:30 a.m., and all eight will be broadcast live on MHSAA.tv – click for full details.

After finishing 32 points behind Romeo at last season’s Final, Caledonia is favored to win its first championship since claiming the Class B title in 1996. The Fighting Scots graduated their top runner from last season’s team but return their next four finishers led by senior Josh Oom, who placed 24th a year ago. Brighton also graduated its top runner from last season but brings back the next four from the Finals lineup. Sophomore Seth Norder and Grand Haven as a team didn’t reach the Finals a year ago, but he was a Regional champion last week and is backed by 2020 individual qualifier Nolan Clark, a junior. Romeo is ranked No. 4 and returns four of its top six from a year ago, led by senior Jack Kelke, who placed 10th individually.

Individuals: Hartland senior Riley Hough has been one of the headliners statewide this season, and his best time of the fall (14:37) is well ahead of the field after he also ran the second-fastest time in MHSAA 5K Finals history (14:49.62) in 2020. He’s one of three top-10 and five top-20 finishers returning to this race. Farmington senior Peter Baracco was fourth at the Finals last season, 19th as a sophomore and 17th as a freshman, and Traverse City Central senior Luke Venhuizen has the division’s second-fastest time this fall after finishing 18th in LPD1 last season. Third on this year’s list is Lapeer senior Jeremy Williams, who was second to Venhuizen at their Regional at Saginaw Heritage.

After Fremont won the last two team titles and Chelsea won back-to-back the two seasons before those, it may be Otsego’s time to climb the podium after finishing runner-up in both 2015 and 2019 and third last season. The Bulldogs return three runners from the 2020 Finals lineup, with senior Nick Cockerel having finished 20th individually and now leading the way. Grand Rapids Christian is seeking its first championship since 2014 and brings back six runners from last season’s ninth-place team. Pinckney was fifth last season and brings back four of its top six finishers including senior Caleb Jarema, the individual runner-up a year ago. Senior Conor Somers was fifth individually last season, but Fremont graduated its other four scorers from that repeat champion.

Individuals: Jarema and Somers top a group of nine returning from last season’s individual top 20. Jarema has the division’s fastest time this fall at 14:57, and Spring Lake senior Ian Hill is second on that list and finished eighth a year ago. Dearborn Divine Child junior Michael Hegarty has the third-fastest time in Division 2 this fall and finished 10th at the 2020 Finals. Chelsea has a chance to make a push in the team competition, with sophomore Connell Alford leading the way after finishing 11th individually a year ago. Parchment junior William Winter is running in Division 2 and finished 10th in Division 3 in 2020.

After winning its first championship last season since 2005, St. Louis is favored to come out on top again. The Sharks return four of last season’s top six including three runners who placed among the individual top 23, led by senior Aaron Bowerman in ninth and senior Nate March in 17th. Hart was a close second last season, just 13 points back, and despite graduating its top two from that lineup returns the next four runners. Traverse City St. Francis was third a year ago and has three of its top six runners back. Ithaca is intriguing; the Yellowjackets graduated their top runner after finishing seventh, but return the other sixth including two from the individual top 20 in junior Parks Allen (12th) and senior Espen Lehnst (15th).

Individuals: Seven of the top eight from last season graduated, but champion Hunter Jones is back. The Benzie Central junior is seeking his third individual Finals championship in three tries, and his best time this fall (14:44) is 42 seconds faster than the field. Manton senior Noah Morrow has the second-fastest time this season and was the next-closest placer returning from last fall after coming in eighth. Kalkaska senior Tyler Guggemos is a two-time Regional champion, and he has posted the division’s third-fastest time.

Johannesburg-Lewiston is seeking its first Finals championship in this sport, with five of its top six back from last year’s team that finished 23rd. Concord is looking to return to the top after winning three of four Division 4 titles from 2009-12, and three of the team’s top five from last year’s third-place team are back led by senior Jonathan Mikovits (ninth individually). Breckenridge is ranked No. 4 and is an interesting possibility after also winning the 2019 championship. The Huskies have four runners back from last year’s runner-up team led by senior Mason Sumner, who placed third individually. Reigning champion Carson City-Crystal also has four runners back despite graduating individual champ Coleman Clark.

Individuals: Sumner is the highest-placing of 10runners back from last season’s top 20, and he has the second-fastest time in the division this season. Petoskey St. Michael senior Samuel Paga is back after coming in fifth, and Webberville senior Nathan Lott is running after placing sixth in 2020. Wyoming Potter’s House junior Lezawe Osterink has cut nearly a minute from his best time from a year ago and is undefeated this season, with his 15:42 topping the list of Division 4’s fastest this fall.

PHOTO Davison’s Iain Forrest (28) and Dexter’s Brandon Anderson (45) are among runners returning in Division 1 this weekend at Michigan International Speedway. (Click for more from RunMichigan.com.)