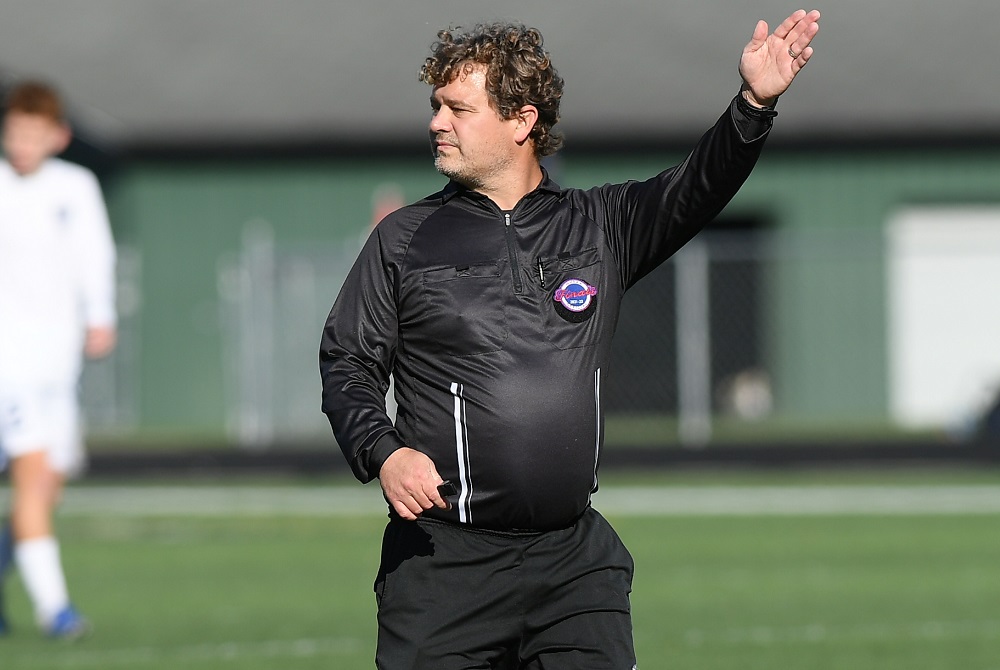 Below is this week's segment – Soccer Timing - Listen

One of the biggest complaints people make about professional soccer is never knowing how much time is really left in the game. The clock counts up from zero, and the referee can add time at their discretion.

But that’s not the case in high school soccer.

To start with, halves are 40 minutes, not 45. The clock starts at 40 and counts down. And when players are injured and the ball is not in play, the clock will stop and then restart when action is ready to continue. 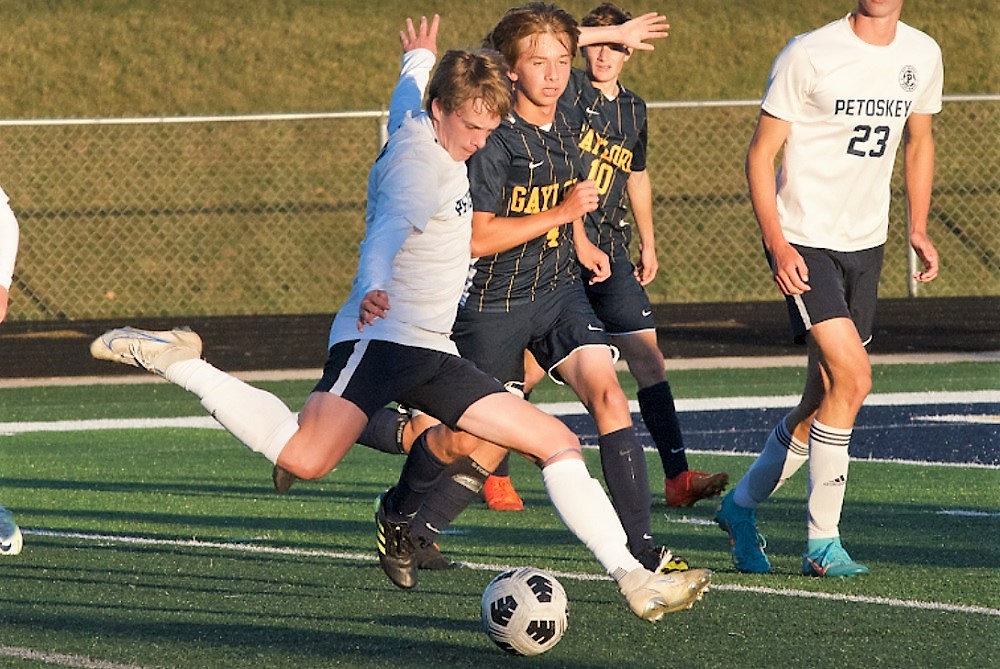 There are lots of ways to increase awareness for cystic fibrosis (CF) involving the color purple – or violet, as many perceive it to be – which is the color designated to represent the rare genetic disease.

To the Petoskey High School soccer program, purple has been primarily the color used to represent May as cystic fibrosis awareness month, as well as the shade of a team warm-up jersey and even an extra soccer uniform to wear during soccer tournaments.

That will change Saturday, Oct. 6, when Elks Rapids and Petoskey meet on the turf at Northmen Stadium.

When they come to Petoskey next weekend, the Elks will be in their visiting white — the same jerseys worn by the Northmen in that early-season match up. But the Northmen will not be wearing their traditional blue home jerseys. They will be wearing purple, ready to play in what has been dubbed the “Purple Game” in a drive to increase awareness for cystic fibrosis and help the approximately 30,000 Americans living with it.

The game is focused on awareness, not on any one individual living with it. The disease has robbed many people of tomorrows – progressively limiting their ability to breathe and tragically shortening life.

However, Kurtis Mainland, one of Petoskey’s leading scorers this year, is one of those living with CF. He was diagnosed at DeVos Children's Hospital with the life-threatening disease at 8 months of age.

It will be just another game for Mainland. His parents Megan and Ken will be there as well as his older brother Corbin, as he always is. Sister Mackenzie is likely to be there too. Kurtis is looking ahead to the Big North Conference title chase and another postseason run.

And unless you know Mainland or know he wears number one, you likely have no idea he lives and plays with CF.

He’s happy to help raise awareness for the disease with his purple jersey.  He doesn’t let the disease control him and playing soccer is normal for him, as is watching for his parents and coach Zach Jonker.   Mainland has been coached by the Jonker since he started participating in Petoskey Youth Soccer some 10 years ago, a fact bringing comfort every practice and every game to Mainland’s parents. 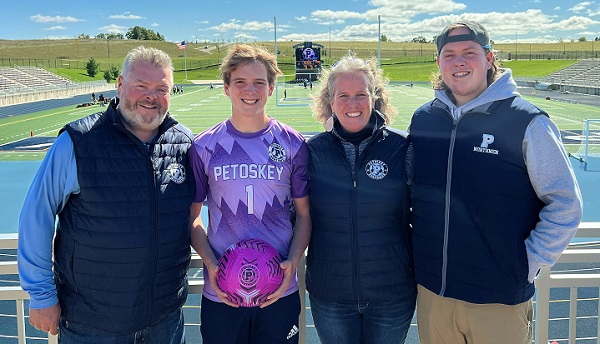 Jonker and Kurtis’ parents know that while the player wearing the purple jersey sporting “1” may not score against the Elks, he will do the work in the midfield that may to lead the Northmen to another victory

Mainland will be focusing on nothing more than getting the win. He’s much more concerned with the team’s battles than his own, and has no interest in drawing attention or standing out.

“The only time I really notice I have CF is in the mornings when I do my treatment, and at night when I take my medicine,” he said. “We just have to do what we did at Elk Rapids last time, and we will win it.”

Mainland has five goals and five assists as the Northmen are off to a 10-5 overall and 4-1 Big North start.  They have a chance to move into first place in the conference with a rematch against Traverse City West on Monday — also at home. West is 4-0-1 and beat Petoskey 2-1 in the first meeting.  A trip to Alpena, which tied West on Thursday, also will occur before the Purple Game.

He’s having a stellar senior year despite CF and having to recover from a nose surgery this summer stemming from an accident on a trampoline the year before.

For Mainland and his parents, the prescription drug Kalydeco has become a miracle of sorts. It’s helped him live a normal life, which is all he really asks. He’s well aware other teams, players and referees don’t notice he lives — and plays the game — with the life-threatening disease.

“It has allowed him to play soccer and be as active as he can be, and is without the reduced lung capacity,” his father said of the medication. “There are people that look at him on the soccer field and have no idea he has cystic fibroses.

“He has the mindset nothing will slow him down,” Dad continued. “He doesn’t want anything to slow him down including cystic fibroses.”

Mom offers another perspective shared by the Mainlands, who prefer to look at their son as having a title, rather than a disease.

Senior day for the Northmen is yet to come. Purple Game organizers are looking to create a greater awareness of CF, not necessarily to put the spotlight on the midfielder battling it.

“I am not one to go out and advocate for it and be very public about,” Mainland said. “I just go out like a normal kid.

“I just play the game I love, and I’ve always played like that,” he continued.  “I don’t really notice it.” 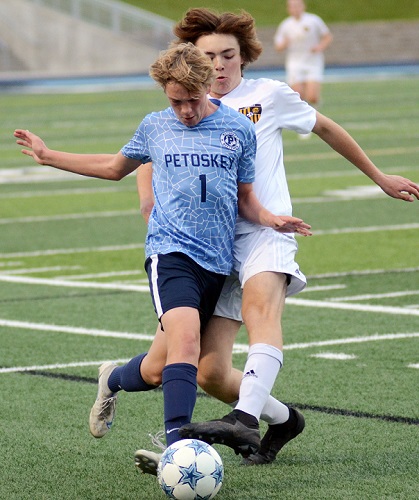 “It has never hindered his ability to play and contribute,” Jonker said. “He is a fantastic young man coming from a family dedicated to serving the community.

“This is the end of his four years, so we thought we’d raise a little awareness about CF and not specifically about Kurtis’ situation.”

Ken Mainland will be doing the announcing at the Purple Game, just as he’s been doing for years.  Megan will coordinate concessions.

Kurtis Mainland is an Eagle Scout as well and his badge-earning projects were improvements to the Petoskey Youth Soccer Association’s Click Road Complex, a site of some of the Northmen home games.  It is also a place where Kurtis referees youth soccer matches.

He also serves in a leadership position for the Blue Crew, the student section supporters of Northmen athletic teams. He was on the ski team in middle school, and he’s a golfer during the offseason.

The Mainlands, who sees themselves as no different than any other soccer parents, will have their eyes on everything Saturday.

Onlookers say there is no way anyone with prior knowledge would know Ken is Kurtis’s father as he does his PA work. As for Megan, perhaps maybe not the case.

“We love the sport,” Megan said. “It has made him grow in so many ways.

“Once he was diagnosed — yeah it was a hit — but it was almost we were relieved because we had answers on how to help our son now,” she continued. “And, we kind of went forward and we didn’t change much.”

The Petoskey/Elk Rapids matchup will be the second meeting this season of the two soccer teams noted historically for long postseason runs. They often meet twice a year, but not in the postseason though as they are in different divisions. Petoskey won the first game this fall 1-0 in Elk Rapids, which has rebounded from a 1-5-1 start to a 9-7-1 overall record today.

Kickoff for the Purple Game is 11:30 a.m. The announcer will let the game attendees know why Petoskey is wearing the special purple jerseys.

PHOTOS (Top) Petoskey’s Kurtis Mainland winds up for a shot against Gaylord this week. (Middle) Mainland, second from left, shows Petoskey’s purple jersey, with his family (from left) Ken, Megan and Corbin Mainland. (Below) Kurtis Mainland works for possession while shielding off an opponent. (Top photo courtesy of Dylan Jespersen/Gaylord Herald Times, middle courtesy of Zach Jonker and below courtesy of Drew Kochanny/Petoskey News-Review.)