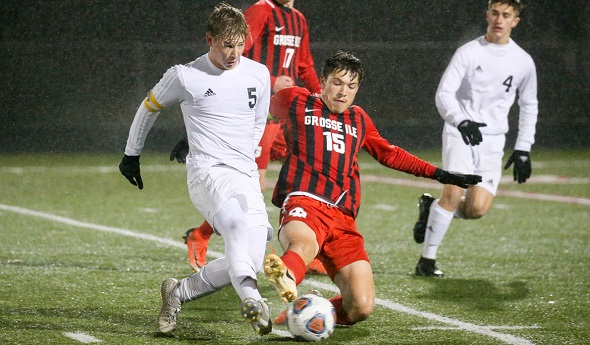 Saturday’s MHSAA Boys Soccer Finals will provide opportunities for four teams to finish their seasons with the ultimate win, and all of the contenders have had their shares of success over the years.

Division 2 is guaranteed to produce a first-time title winner, with Grand Rapids Forest Hills Northern and Melvindale facing off. Troy Athens and Grosse Pointe Woods University Liggett are recognized powers in boys soccer, but they’ll both be playing for their first Finals championships since the 1990s. And it’s been more than a decade since either Traverse City West or Grosse Ile have taken home the big trophy.

All of Saturday’s Finals will be broadcast live and viewable with subscription on MHSAA.tv, with audio available on MHSAANetwork.com. See below for glances at all eight finalists, and come back to Second Half later Saturday for coverage of all four championship games. (The Michigan Power Rating noted below is derived from a team's success and strength of schedule and was used to seed the top two teams in every District at the start of the postseason.)

MELVINDALE
Record/rank: 16-3-2, unranked
Michigan Power Rating: No. 28
Coach: Tomas Belba, first season (16-3-2)
League finish: Second in Western Wayne Athletic Conference
Championship history: Has never played in an MHSAA Final.
Players to watch: Alhusain Yahya, sr. M (23 goals); Fouad Noman, jr. F/M (23 goals); Alhasan Yahya sr. D/M (3 goals/27 assists); Carlos Huerta sr. M (9 goals/13 assists).
Outlook: Melvindale has advanced from its first Semifinal appearance into its first MHSAA championship game in this sport, with a Regional Final win over No. 12 Parma Western among highlights from the tournament run. The Cardinals have outscored their six postseason opponents by a combined 21-5 and not given up more than one goal in any playoff game. Senior Julian Castillo has played 95 percent of the minutes in net this fall and is giving up just one goal per game with a .942 save percentage. Belba previously served as the junior varsity coach before taking over the program this fall.

GRAND RAPIDS SOUTH CHRISTIAN
Record/rank: 21-4-2, No. 4
Michigan Power Rating: No. 7
Coach: Jason Boersma, ninth season (149-42-22)
League finish: First in O-K Gold
Championship history: Three MHSAA titles (most recent 2015), two runner-up finishes.
Players to watch: Jeff Herrema, jr. F (22 goals/12 assists); Reese Bos, sr. M (1 goal/9 assists); Nik Schepers, jr. GK (0.80 goals-against average/11 shutouts); Thom DeVries, jr. M/F (13 goals/4 assists).
Outlook: South Christian will play for its fourth title this decade led by a number of players who should be around to start the next one – after the juniors mentioned above, junior Boston Knapp was the next leading scorer with seven goals and five assists entering this week. The Sailors’ best win surely came in the Regional Final over top-ranked Holland Christian, which had beaten South 4-0 in August. Herrema made the all-state second team last season, when South was eliminated from the tournament by the eventual Division 3 champion (Hudsonville Unity Christian) for the fourth time this decade.