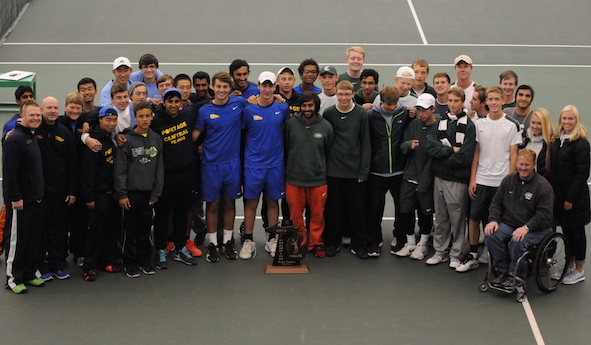 
GRAND BLANC – It might have seemed like a bold proclamation when the boys tennis season started in August, but Portage Central sophomore Bill Duo had a lofty expectation for what he wanted his season to be like.

Duo’s expectation turned into reality, as he finished off the season by achieving his ambition on the final day of the Lower Peninsula Division 2 Final on Saturday.

Duo capped off his perfect season by not losing a set all year, with the final victory being a 6-4, 6-3 win over Connor Genschaw of Grand Rapids Forest Hills Central.

It was the third time this season that Duo defeated Genschaw, this time in a match that started outdoors at Holly High School but was suspended and moved indoors to Genesys Athletic Club when sleet arrived in the middle of the first set.

Duo also played in the No. 1 singles championship match in 2014, but finished runner-up.

“The first time is definitely new territory,” Duo said. “The second time it’s like ‘yeah, I remember this.’ It was different places, but you kind of have to learn from that experience. I had to come out here and play. He played a great match. I was excited. I was pumped for the finals.”

While Duo was the one who celebrated the individual title at the expense of Genschaw, both got to celebrate team success. 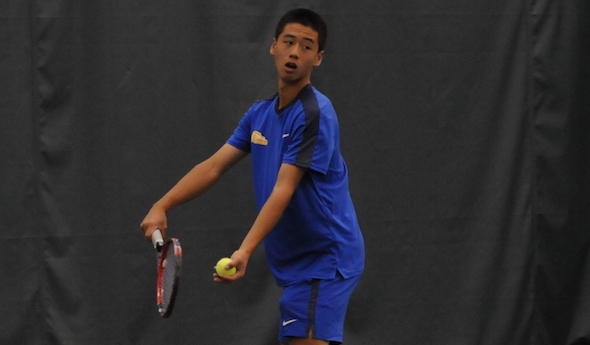 Forest Hills Central also was champion in 2014, while Portage Central’s title was its first since 2001.

A big storyline of the tournament was weather, which wreaked a lot of havoc on both days of the event.

Participants had to pack up right in the middle of the action both days and head to Genesys Athletic Club, where they had to warm up again and refocus.

Granted, at the end people might not have minded the move indoors with everyone bundled up in sweatshirts, hats and blankets as they watched the action.

“You don’t (prepare for it),” Portage Central co-coach Erik Anderson said. “You really don’t. We stay focused and talk about getting our mindset. It doesn’t matter where we play; it’s how we play. Just focus on the ball and not the surroundings. It’s everything inside the lines. It doesn’t matter about the fans, spectators or environment. We prefer to play outdoors because there is more elements to the game, but if you come indoors it’s basically skill vs. skill.”

At No. 2 singles, Michael Szabo of Midland Dow defeated Ben Orwin of Portage Central in another match that was in progress outside before being moved indoors, as was the No. 1 doubles match between Portage Central’s Kento Hirakawa and Cameron Raedy and Detroit U-D Jesuit’s tandem of Louis Wyre and Joey Wilson.

That might have been the most entertaining match of the day, with Hirakawa and Raedy finally prevailing, 6-4, 4-6 and 7-5.

Lucas Guy of Portage Central took the title at No. 3 singles with a 6-3, 6-2 win over top-seeded Tyler Conrad of Midland Dow, while Jacob Wiltjer of Forest Hills Central topped Aditya Middha of Midand Dow at No. 4 singles, 6-2, 6-3.

The Forest Hills Central team of Justin James and Aidan Rynbrandt won the title at No. 2 doubles with a 7-6 (5), 6-3 win over J.J. Kirkman and Noah Nichols of Midland Dow, while Tim Spurlin and Jack Ziegler of Forest Hills Central won the No. 3 doubles crown with a 5-7, 7-5, 6-0 win over Brian McHale and Josh Belfer of Grand Rapids Forest Hills Northern.

Finally, Peyton Herbert and Mike Battiste of Forest Hills Central won the No. 4 doubles title with a 1-6, 6-1, 6-4 win over Andrew Dicks and Scott Anthony of Forest Hills Northern.