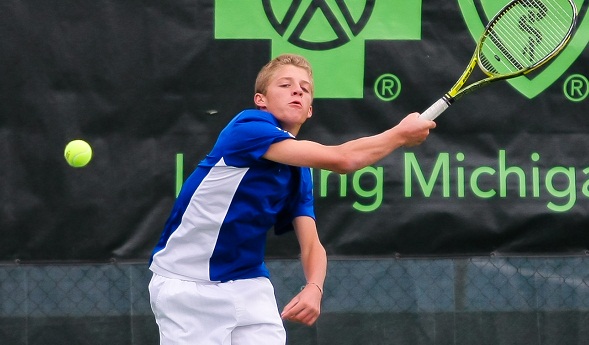 Billy Heckman has known Davis Crocker for a while. Sharing a corner of Michigan’s tennis community, they’ve crossed paths at USTA tournaments, played each other once two winters ago, and were teammates on a junior Davis Cup team. They plan on hitting together this winter.

And to be honest, Heckman remembers being a little afraid of Davis’ game – the big serve and big volleys that helped the Kalamazoo Loy Norrix senior win the MHSAA Division 2 championship at No. 1 singles last season.

But Heckman felt no fear at last week’s Regional at Portage Northern.

“I was thinking to myself, this is my senior year and I want to end it with a bang,” Heckman said.

The Portage Central senior has two more days left in his high school career. But it’s fair to say that regardless of what happens at this weekend’s MHSAA Lower Peninsula Finals in Holly, Heckman’s straight-set win over Crocker in the Regional Final will be a memorable moment he’ll hold onto forever.

Heckman receives a Second Half High 5 this week after downing Crocker 7-6 (5), 6-1. The loss was Crocker’s first, against 26 wins, and more or less guaranteed Heckman the top seed this weekend.

“It felt great because it was my last Regional,” Heckman said. “No matter what happens at states, I won the Regional and he can’t take that away from me.”

Heckman is 25-4 this season – although three of those losses came when a back injury forced him into a default and two forfeits. The other loss came to Ann Arbor Huron’s Jack Peterson, the fourth-seeded No. 1 singles player in Division 1.

An experience and an evolution helped set Heckman up to finish his high school career on top. A year ago, he faced Midland Dow’s Jonathan Gurnee in the MHSAA championship match at No. 2 singles. Heckman had beaten Gurnee badly earlier that season, 6-0, 6-0, but at the Finals ended up becoming the final high school win for the player with the most for a career according to the MHSAA record book.

“At first I was just devastated. I’d beaten him 0, 0 a month before, and there was no way I was going to lose,” Heckman remembered. “I was the one seed, and I was going in with a lot of confidence.

“Not to take anything away from him, but that day I just played really badly. It made me want to work harder, especially for high school season. You can’t go in knowing you’re going to win.”

But a player can prepare. And doing so led to a big jump in Heckman’s evolution this summer.

He admits he was like most freshmen and sophomores, immature, joking around too much and “just being annoying.” He’s always had talent; he’s played No. 3 singles or higher all four years for one of the state’s top programs. But after last season, he decided it was time to put the team first.

A busy two months of running tennis tournaments plus a death in the family kept Portage Central coach Peter Militzer from being as involved as usual with the team’s traditional summer hitting workouts. So Heckman volunteered to organize, started a Facebook group to get the word out, and soon had 20-25 players training three times a week. During summers past, that number was usually 8-10.

“JV kids started coming, and there were more kids in the group than at any of the clubs around here,” Heckman said.

“I like to think of myself as (a leader). I just like especially when people can see results, and I contributed toward that.”

He saw plenty in his game as well. ITA tournaments during the summer in Kalamazoo, Bloomington, Ind., and Columbus, Ohio, allowed him opportunities to face bigger, older competitors.

Heckman also grew the last two years – finally, and in a giant burst. Militzer said Heckman was the size of a 10-year-old until he was nearly 16. More size meant power and the ability to play more of an offensive game.

“I call him a tennis addict. He’s passionate about the game, and of all the boys I’ve coached, he’s got the best tennis IQ,” Militzer said. “On the court, he senses what opponents do not like to do and repeatedly makes them do that. He makes them hit shots they don’t want to hit.”

Heckman was up 5-4 in the first set against Crocker, but pulled back on his attack. He realized quickly he shouldn’t have, and didn’t hold back the rest of the match.

And he surely won’t if they meet again this weekend.

“I’m pretty sure I’ll see him at the Finals again. I’m expecting it.”