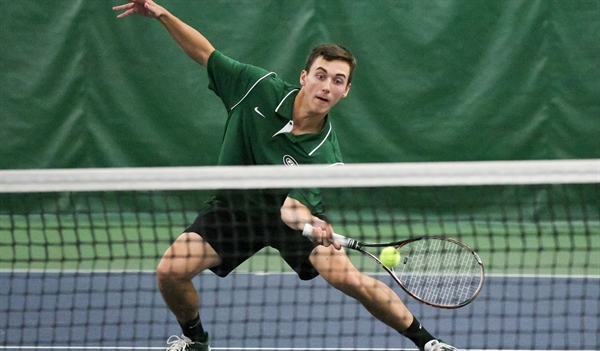 His doubles partner, senior Carson Schmidt, looked at him in surprise, saying he didn’t know it until they defeated fourth seeds Louis Wyre and Joey Wilson, 6-3, 6-0, in the Lower Peninsula Division 2 Final.

“I’m kinda glad I didn’t know,” third-seeded Schmidt said, laughing. “That would have made me even more nervous. I feel we probably played the best tennis in that match that we’ve played all year. We really played well.”

Forest Hills Central won the championship with 27 points, followed by Grand Rapids Forest Hills Northern with 22. Midland Dow and Portage Central tied for third with 21 points and University of Detroit Jesuit rounded out the top five with 20 points.

“We worked hard all year and when the guys came in, our goal was to win a state championship,” he said. “We just took it match by match. It was extremely close, and the guys fought hard and pulled out wins.

“Our singles players are young, doubles have a lot of experience, a lot of seniors, a lot of leadership. Winning three of the four doubles flights showed experience definitely does help.”

Talking about Midland Dow, Carson said: “They’re always competitive every year, so it feels good to beat them. It’s a great way to end high school.”

Neither FHC nor Midland Dow had players in the No. 1 singles final, where Northern senior Steward Sell won the battle of the Portages. 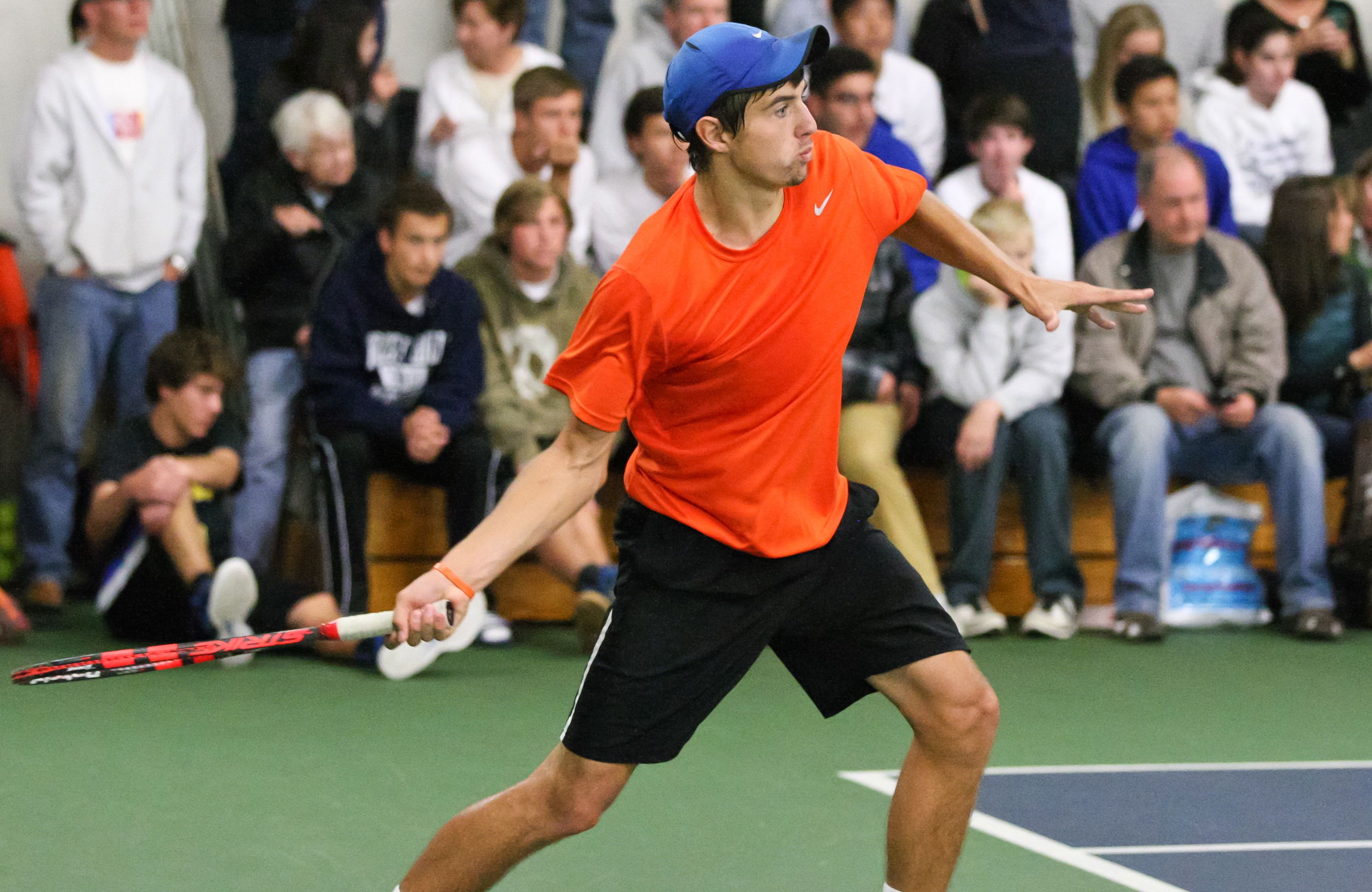 “It gave me a little confidence, but I knew I couldn’t let anything in because he’s a great player,” Sell said. “I had to keep it up.

“The last two times I played him, we went to three sets. I knew it wasn’t going to be easy. This is definitely the best season, being undefeated and winning the state title. That’s big.”

Sell had one of the biggest serves in the tournament, but Duo scrambled to return every shot.

“You’ve got to be aggressive first and take your chances before he does,” Duo said of Sell. “But Stew played really well today. He overpowered me. He’s a big guy.

“I was hoping to upset him this time. It’s the most important spot. I thought it would be really cool to win states as a freshman, but he played really well today. He overpowered me.”

“Obviously, it’s nerve-wracking because Bill’s a great player,” she said. “They did have a couple of three-set matches, so in the back of our minds we knew that if Bill showed up and Stew was having a bad day it might not have gone our way.

“Stew came out to play today and brought it home. He’s a good player, but more importantly, he’s a good person and he’s been a great leader for the kids.”

Although Midland Dow finished third, it had individual champs at Nos. 2 and 3 singles.

“There are many teams in this state that would love to be where we’re at, and we’ve got to put it in perspective,” he said.

Schwartzkopf said there are two main reasons his team saw the title slip away.

“Number One, the amount of talent we lost last year,” he said. “We had five guys that left that had maybe a cumulative 11 individual state championships. Then our No 1 decided to play ITF instead of coming back to the team.

“We were replacing an immense amount of talent. I don’t think that was the whole reason, because our guys were up to the challenge. We’ve been ranked No. 1 most of the year. Ironically we beat the state champions in a dual, 6-2, and we beat the runner-up 5-3.”

He added that inexperience and first-round performance were the difference this year.

“I’ve always told these kids, if everybody makes it through the first round, we win,” he said. “If you run the numbers and you look at it, had we done that, we would have won outright. The fact that they were young, by losing so much experience and having so much inexperience come in, they weren’t able to handle the mental pressure.”

Action was moved inside from Kalamazoo College’s Stowe Stadium to the Markin Racquet Center because of inclement weather, which was fine with Angell.

“It’s a lot faster, but it’s a little easier to hit the ball because it’s cleaner,” he said. “Today I thought I played really well. Won 7-5, 6-1 both times (against Orwin) this year. It’s always a tough match.”

Angell won a title at No. 2 doubles last year, but “this one’s probably the biggest because 2 singles is the highest I’ve played. Really hard match.”

Said Orwin: “He was just the better player today. He put a lot of pressure on me. I thought I played my hardest, but I just didn’t come out with the win.”

“Overall, I thought it was a good tournament for Portage Central,” he said. “Altogether, we had a chance to catch the champions in the final day. We just didn’t get it done. I’m pleased with our result.

“We gave it our all. It just wasn’t enough today. I expected top four. I expected to be in contention for a championship the final day, and we were.”

“States is a whole different thing,” Szabo said. “You have to come with your best game and I did today, I guess.

“I was more focused on every point because you have more eyes on you. It’s more important in the finals.”

Minzlaff said this isn’t the first time the two have faced off.

“I think when I was playing the No. 1 seed, I just gave it my all,” Olmstead said. “I left everything out on the court. When I came up against the second seed, he had more than I had and he played a lot better. I couldn’t do much. He played great, and he deserved it.”

Wiltjer said playing in an MHSAA championship tournament with a team is a lot different than USTA tournaments.

“It’s a lot bigger and a lot more important,” he said. “There are a lot more players here.”

Besides Fox and Schmidt, Forest Hills Central’s doubles winners were No. 6 Nico Finelli and Joey McClure at No. 1 and top seeds Humzah Azeem and Ryan Conner at No. 3.

No. 4 seeds Clark Shawver and Hunter Hall, from Forest Hills Northern, won the No 4 doubles title.