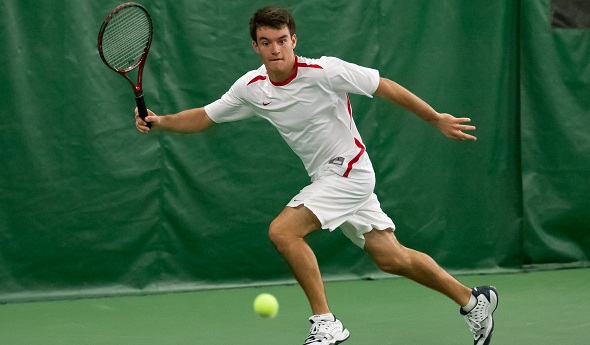 KALAMAZOO – Coach Eric Gajar knew his Ann Arbor Greenhills team needed just one win on the second day of competition to clinch its fifth consecutive MHSAA Lower Peninsula title, but that was one fact he tried to keep from his players.

“We didn’t tell those guys that, but they’re smart guys, so they’re starting to figure it out,” Gajar said during Saturday’s semifinals that were played inside because of inclement weather.

“We didn’t really give them the full story, but they started counting and knew we only needed a couple points.”

On a team loaded with experience, it was the only freshman, Juan Martin-Dyer, who won the team’s first match of the second day to clinch the championship.

Martin-Dyer, the top seed, defeated fourth seed Jake Johnson of Lansing Catholic, 6-0, 6-2, in the No. 3 singles semifinal before losing to Kalamazoo Christian’s second seed, Brad Plaiser, 1-6, 6-2, 6-2, in the championship match.

“I had no idea, actually. I had no idea at all,” Martin-Dyer said of the clincher. “It feels good. It’s not just me, though. All the guys won (Friday). It’s all about the team. I only won a few points.”

No. 1 singles was the only flight without a Greenhills finalist.

Top-seeded Michael Sienko, of Williamston, was a player on a mission, defeating second seed Chance Conley, of Portland, 6-1, 6-0.

The two faced off in last year’s No. 1 singles final, with Conley coming out the winner. They also play in the same league, the Capital Area Activities Conference White.

“I was really disappointed last year at the result, and I thought I should have won the match,” Sienko said. “But he won it, so I was really working hard to win the final match this year, and I did.

“I think I played well. Maybe I rose to the occasion. I just focused a lot, stuck to my game plan, and it worked.”

Sienko won a MHSAA title at No. 2 singles as a freshman, but “this means a lot more to me.”

Conley said he figured Sienko would be out for revenge.

“He had an urge,” Conley said. “He wanted to get me back. He had something I didn’t have, and he wanted it badly.

“Mikey was on top of his game. My coach said he only made four unforced errors the entire match. There’s nothing you can really do to compete with that.”

Kalamazoo Christian’s Plaiser said losing at No. 3 singles was not an option, since it’s his senior year.

He played at No. 1 singles last year, but he’s in the Army reserve and during the summer was at basic training. He joined the team halfway through the season.

Dropping the first set, “I don’t know if I was nervous,” he said. “I don’t know what it was. I wall-balled like every other ball so bad. After that, I just pulled it together.”

K-Christian coach Bryan Keeley said he knew Plaiser could pull out the win.

Keeley said he talked to his player after the first set, and Plaiser said he knew what he had to do to turn the match around.

“That’s what you see in maturity out of your seniors and expect of your captain,” Keeley said.

Greenhills won the other six flights for 36 points, double the 18 of second place Comstock Park.

“The key was I got almost everybody back,” Gajar said. “We had a big target on our backs.

“I have a very experienced roster. I have a freshman (Martin-Dyer) who went right to No. 3 singles and a guy (Paul Reed) who transferred in last year (from St. Mary Catholic Central) and sat out a year, then went to No. 1 singles. It really allowed me to bulk up the doubles guys. We were deep. This is as good a team as I’ve had.”

Gajar said in spite of clinching the championship with the first semifinals win, the players were still very motivated, as evidenced by their exuberant cheers for their teammates during the last two doubles matches on court.

“There are some guys who have been playing for a while that are looking at trying to get their first individual titles,” he said. “The other thing that’s got them a little bit motivated is they’ve looked back at some of the past teams we’ve had and looked at their point totals and wanted to lay claim to out-distancing them.

“We told them to get through the semis for the team and go to the finals for yourself.”

Comstock Park’s No. 2 doubles team of Wil Douma and Ryan Schall won their semifinals match, 6-1, 6-4, over Ludington’s Sam Nellis and Justin Markham to earn the point needed for their team’s second-place finish.

They lost to Greenhills’ top seeds, Adhi Rajaprabhakaran and Nick Sandhu, 6-3, 6-1, in the final.

“We had no idea,” Douma said of the importance of his point. “We just went out there and played. Freshman year, I broke my neck when I was in eighth grade playing football, so I just walked on to play tennis. (Schall) picked it up his sophomore year.

“When we walked off the court, our two coaches were standing right there. They were like, ‘You guys just clinched it for us.’ We were pumped. No one ever thought we’d be there today.”

Schall said he wasn’t very happy to play inside because “I’ve never played indoor tennis. But once, we started, I started liking it a lot. No wind, no weather. Everyone’s on fair ground.”

Comstock Park coach Pete Luczyk said the program has turned around, making it to the MHSAA Finals for the first time.

“Honestly, four years ago, we had five returning JV players and that’s all we had,” he said. “Over the past four years, it’s been just a culmination of everything and the kids just going nuts.

“One of the best stories of our team are the twins, Dylan and Tyler Fink. They’ve played No. 1 doubles all four years and have amassed probably 70 first doubles wins over those four years. For them to be in the semifinals and lose to Ann Arbor Greenhills, 6-4, 6-3, is simply incredible.”

Talking about comparisons to the pro doubles specialists Mike and Bob Bryan, “We’ve heard that comparison for four years now, so we’ve gotten used to it,” Dylan Fink said.

For the twins personally, “For our first time at states, to make it to the semifinals is great,” Tyler Fink said. “We’re really glad our team made it this far. We really couldn’t have done it without every member of our team pitching in for this win."