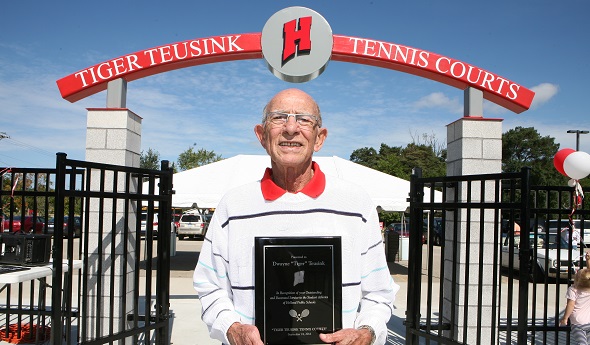 A few days after he stood in front of a group of admirers including friends, fellow coaches and former players – including some from his first Holland High School tennis team in 1972 – Dwayne “Tiger” Teusink drove past the courts that now bear his name.

It’s a welcoming sight honoring someone who has welcomed thousands though the sport over more than a half century as a coach and administrator.

Teusink, a 1954 graduate of Holland High and later Hope College, coached high school tennis at Jackson for seven years and then Holland for 35 while also lending a significant behind-the-scenes voice in the formation of high school tennis as it’s played in Michigan today.

He was recognized for those and many more contributions during the Dutch’s Homecoming weekend Sept. 24 as reportedly more than 200 attendees cheered the renaming of the 5-year-old Holland High facility as the “Tiger Teusink Courts” in honor of the longtime teacher, athletic director and coach.

“The whole experience was overwhelming,” Teusink said Tuesday. “Our facility is a first-rate facility. Holland has always had a great tennis program. The community supports tennis, and this facility obviously belongs to the community, but it makes me really proud that my name is associated with it.”

He’s been associated with most of the foundation-setting of the sport both locally and statewide over the last five decades.

At a statewide level, Teusink’s work has affected thousands more. He was on the committee that in 1976 introduced the flighted MHSAA tournament structure developed to promote a team format that remains the standard today. While at Holland, Teusink managed 63 Regional and 17 MHSAA Finals tournaments, and he served on the Finals seeding committee from 1980-2011.

He continues to serve on the MHSAA tennis committee that annually considers rules changes and other business that pertains to the sport. He also has played a major role in the development of the Michigan Interscholastic Tennis Coaches Association, and held offices of president, vice president and secretary/treasurer over a 32-year span.

“He was a mentor to me on how to not only to teach the game, but more importantly teach kids the right way to compete and to enjoy the sport,” said Grand Haven Lakeshore Middle School principal Kevin Polston, who coached tennis at DeWitt from 1999-2002 and then both Buccaneers varsities from 2003-08, and served with Teusink on the MHSTeCA board. “I respected that he always stood for what was right, even if it wasn't easy. You always knew where Tiger stood on something, and he could clearly explain why he came to the conclusions he did. Quite simply, when Tiger spoke, people listened.”

Kevin O’Keefe played four seasons for Teusink before graduating in 1986 and has heard from a number of other alums how their coach was ahead of his time.

As the current Dutch coach since 2008, O’Keefe inherited the “big binder bible” of Teusink’s lesson and practice plans that also contains his mentor’s thoughts on everything from conducting challenge matches to motivating players and working with parents.

“He’d come every day with a plan in mind and with an agenda,” O’Keefe said. “The logistics of how it works still work. A lot of it is still quite relevant.”

Other ways Teusink has become memorable and respected over the years are not known by many. His players always knew that being on time meant being five minutes early, and Teusink would have practices start at odd times like 3:14 or buses leave at 6:54 so his players wouldn’t forget. Polston received the mentor’s help one year running Grand Haven’s league tournament – and marveled at how Teusink allowed players to pick on which court they played, and then also kept track to make sure each school got to pick a court the same number of times.

A more significant philosophy surely benefited hundreds who have played for him. Teusink’s was a no-cut program; his teams regularly numbered 45-50 athletes. “That simply enhanced the things we did to teach teamwork, team discipline, belonging to a team and so on,” Teusink said.

Teusink captained the Hope College men’s basketball team during the 1957-58 season for Russ DeVette, who taught Teusink much about "simply coaching, how to deal with people." Teusink’s first mentor was Joe Moran, who preceded Teusink as Holland’s tennis coaching legend and is the namesake of one of the city’s public parks and tennis courts.

And just as Teusink drove by the sign bearing his name last week, he’ll surely visit more in the future as he remains a sounding board both for his former player and many tennis decision-makers in our state.

“He comes to probably 2-4 matches a year. We stay in touch. I still call him for things,” O’Keefe said. “He’s always there, always ready to answer a question, give advice.”

PHOTO: Tiger Teusink stands with the plaque presented to him Sept. 24, when the Holland High School tennis courts were renamed in his honor. (Photo courtesy of the Holland athletic department.)