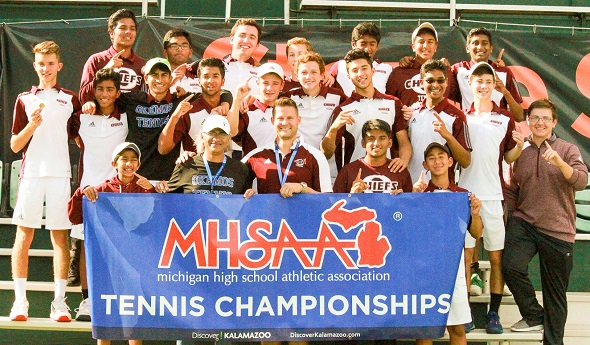 KALAMAZOO — Okemos went home with the team trophy Saturday, but no one celebrated an individual medal with more exuberance than Grand Rapids Forest Hills Central senior Connor Genschaw at No. 1 singles.

The Chiefs won their first Lower Peninsula Division 2 title in 10 years before the finals even started at Kalamazoo College.

No. 3 doubles clinched the championship in the semifinals when top seeds Deniz Kalfa and Druv Talluri defeated Midland Dow’s fifth seeds, Ryan Killmaster and Kevin Kraef, 6-3, 6-0, to seal the win.

Kalfa and Talluri were two of six Chiefs who ended the season without losing a match.

“I don’t take a lot of credit for that (state title),” Okemos coach Chris Silker said. “These kids have worked really, really hard.

“We have an incredibly vested community that is behind the kids 110 percent. I think that’s the key to our success.”

Okemos dominated with 36 points. Birmingham Groves and Midland Dow tied for second with 21 each and Forest Hills Central was fourth with 20. Birmingham Seaholm (18) rounded out the top five.

Genschaw, the second seed, was bolstered by the roar of the crowd cheering on every winner and carrying him to a 6-0, 4-6, 6-1 win over top seed Gabe Liss of Birmingham Groves in the final.

Genschaw was swamped by teammates on the court after the match.

“It’s a culmination of all four years going into this match,” Genschaw said. “I had to cap it off with this one. It means so much to me emotionally.

“Now I’m not going into my life saying, ‘Oh, I lost in the finals in my senior year.’ Now I can say I got a state championship my senior year, and it’s awesome.”

“Then the last set, I was like, this is my senior year. I’ve got to push as hard as I could. I ended up winning the last set, 6-1. It was all mental at that point.”

“Expecting it would be more than I would say coming in, but I sure hoped he could do it,” Central coach Dan Bolhouse added. “He played well throughout the tournament.

“He plays a lot of tournaments out of season so he was mentally prepared to play some tough opponents.”

Liss said he knew the match would be a challenge.

“He’s a senior, and he was thriving in the atmosphere,” the Groves junior said. “He had the crowd firing him up. It was his last year, and he was playing the best he could.”

After dropping the first set at love, “I just tried taking it one game at a time,” Liss added. “I knew the score was 6-0, but the games were closer and I was still in the match and (I knew) that I could keep fighting back for every point.”

Portnoy and Patel are both freshmen.

“Shrey and Josh have been a big part of our success,” Silker said. “They both went undefeated this season until Josh’s final loss today against Gabe Vidinas.

“Even though (Portnoy) had a win over him during the season, Gabe played much better today and I think a little bit of that was his veteran experience.”

Vidinas’ match featured such long points that his two-setter took as long as the first flight’s three. 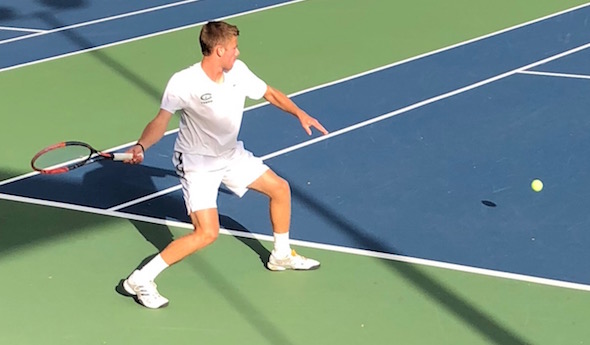 After streaking to a 4-0 lead to start the match, Vidinas won 6-1 but then had to fight for the second set.

“I played him twice before and he grinds; he’s very tough to play,” Vidinas said of Portnoy. “Every time I always have to be playing my best to beat him. It was a tough match.

“I could tell he wasn’t playing his best in the first set. I did my best to play my game.”

Vidinas, a junior, called for a trainer at 6-5 of the second set.

“I was cramping quite a bit,” he said. “Luckily I aced him to get to the changeover. I just held it in and toughed it out (to win).”

With teammates playing next to him, “The energy of my teammates makes me play better and I can be shouting and hollering all the time and my teammates can support me,” Vidinas said. “It’s always nice.”

Portnoy a freshman, said he knew what happened in the first set and tried to change it for the second.

“I was playing too offensive,” he said. “I kept missing deep. I think I should have played safer.”

By the second set, “I just decided his forehand is really strong,” Liss said. “His backhand wasn’t as good, but it was still pretty good.

“I’m like, I’ll just keep it to his backhand and he won’t be able to attack as much. It worked.”

The Patel match featured two freshmen in the third-flight final.

“I had to stay calm, be confident and move (Jonah Liss) around,” Patel said. “He played a lot better in the second set.”

Liss said playing on one of the front courts was “cool.”

Portage Central senior Vishu Ghantasala, the second seed at No. 4 singles, expected a tough opponent and he got it, losing to Okemos top-seeded junior Daniel Gorelik, 6-0, 6-1.

Ghantasala got a look at Gorelik during the semis.

“I saw Daniel playing next to me and he was done a good hour, hour and a half before me, so I knew it was going to be really tough when I had to play just a half hour after I was done,” Ghantasala said.

“A couple of my teammates have played him and they gave me some tips, but in the end it was really hard.”

Although his team already had the team trophy, Gorelik, who lost just three games the entire tournament, said that did not affect his play.

“The mindset was still just go out there and do your job, not let up,” he said. “You’ve got to get to the ultimate goal.”

Gorelik, who finished the season undefeated, said his teammates pushed each other all year.

“We have a lot of talent on the team this year and it makes it much better when you have a lot of good people to hit with,” he said.

Okemos’ No. 3 doubles team featured a senior (Kalfa) and a freshman (Talluri) who went undefeated all season.

Playing in his first state tournament, “It feels crazy,” Talluri said. “It’s just a crazy time. Everything just happened so fast. It was so much fun with the team.”

Kalfa felt a bit of pressure.

“This match was a lot different than any other match I’ve played knowing it’s my last high school match,” he said.

Partnering all season, “Mentally we became more than friends, more than partners, like brothers almost,” Kalfa said of Talluri.

“We always brought each other up, even today when we were both down mentally, the other one was trying their best to bring us up. He’s the best partner I could ask for.”

Other winners were second seeds Dinakar Talluri and Zal Chinoy at No. 1, top seeds Rohan Shah and Siddharth Agisetty, who did not lose a match all season, at No. 2; and second seeds Karthik Kolisetty and Aditya Kandula at No. 4.