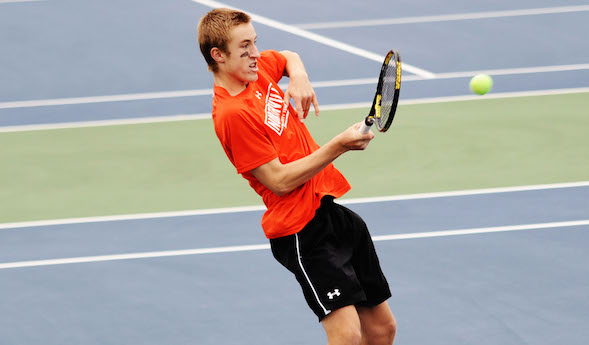 A pair of the state’s most impressive championship winning streaks came to an end during the 2014 MHSAA Lower Peninsula Boys Tennis Finals. But two more streaks remain alive – and at least one is expected to continue.

See below for a glance at the favorites at all four tournaments this weekend, plus  individuals to watch as well. Click for qualifiers and Regional results from all four divisions and Finals results as they are reported, and check back after their completion for coverage of all four tournaments.

Novi broke Ann Arbor Huron’s three-year winning streak a year ago with its first title, and now the Wildcats are expected to build a streak of their own. Troy also is seeking its first MHSAA boys tennis title, and Bloomfield Hills is seeking its first since the merger of the former Lahser and Andover high schools. The most recent title for either was Andover’s in LPD3 in 2005.

Novi – Six flights have top or second seeds, including all four doubles pairs. That doesn’t include Koushik Kondapi, last season’s champion at No 2 singles who is the sixth seed this time at No. 1. Alex Wen also moved up a flight after winning a title, from No. 3 last season to the second seed at No. 2. Maxx Anderson and Daniel Yu are the top seed again at No. 1 doubles after finishing runner-up last season, and Aditya Chitta and Robert Chen are second-seeded at No. 2 after making the semifinals at No. 4 in 2014. Sai Gotur and Abhishek Subash are the top seed at No. 3 after making the second round in that flight last season, and Aakash Ray and Nayan Makim are second at No. 4; Ray was part of a semifinalist at No. 2 last year.

Bloomfield Hills – The Black Hawks will look to contend after finishing 10th a year ago on the strength of a singles lineup featuring two top seeds and all four flights seeded no lower than fourth. Constantine Hemmrich is the number one at No. 3 singles after playing No. 2 in 2014, and Brad Silverman comes in as top-seeded at No. 4 after making the semifinals last time. Josh Mukherjee is second-seeded at No. 1 after making the semifinals at that flight last season, and Andrew Zhang is fourth-seeded at No. 2.

Northville’s Connor Johnston – The top-seeded senior at No. 1 singles is looking to finish with another title to go with his championship at No. 2 as a freshman. He finished runner-up at No. 1 the last two seasons.

Ann Arbor Pioneer’s Ian Yi – He’s back as the third seed at No. 1 after making the semifinals last season and after winning No. 2 singles as a freshman in 2013.

Port Huron Northern’s Chris Adams – He’s the top seed at No. 2 singles after falling to Kondapi in three sets in the final last season.

Ann Arbor Huron’s Austin Choi and Robert Dong – Choi, a junior, won the No. 1 doubles title last season with Jason Chen and this time is top-seeded with Dong, a sophomore.

Forest Hills Central ended Dow’s five-year run atop LPD2 a year ago, but Portage Central is favored to win its first title since sharing the championship in spring 2007 – with an interesting side note that Central co-coach Erik Anderson led East Lansing to back-to-back titles in fall 2007 and 2008. Dow and Portage Central tied for third last season, six points behind the champ.

Portage Central – The Mustangs have either the first or second seed at every flight and reigning runners-up at the top two singles spots in top-seeded No. 1 Bill Duo and second-seeded No. 2 Ben Orwin. Lucas Guy and Camilo Bautista round out the singles lineup with two more second seeds at Nos. 3 and 4, and the Nos. 2-4 doubles pairs are all second seeded as well. Kento Hirakawa and Cameron Raedy are the top seed at No. 1; Raedy was part of a semifinalist at No. 1 last season with Sahil Tandon (now No. 2 doubles), and Hirakawa made the semifinals at No. 3 singles.

Forest Hills Central – The Rangers are seeded to win two flights after winning four on the way to the team title in 2014. Jacob Wiltjer is the reigning champion at No. 4 singles and seeded first, while Peyton Herbert and Mike Battiste are top-seeded at No. 4 doubles. Humzah Azeem teams with Reed Aleck at No. 1 doubles, and although they are unseeded, Azeem was part of the champion at No. 3 doubles last season. Sophomore Connor Genschaw is the second seed at No. 1 singles after making the semifinals last season after entering unseeded.

Grand Rapids Forest Hills Northern’s Jacob Dennen – He was upset in the second round at No. 1 singles as the fifth seed last season, but is back as the third seed this time.

Detroit U-D Jesuit’s Louis Wyre and Joey Wilson – They are the second seed at No. 1 doubles after finishing runner-up at No. 2 in 2014 as a fourth seed.

Country Day has won four straight LPD3 championships and beat runner-up Cranbrook Kingswood by seven points last season while scoring a near-perfect 39 – but Cranbrook Kingswood beat Country Day at last week’s MHSAA Regional. One of those two teams has won the last seven championships and they faced off in all eight flight finals in 2014. Holland Christian finished fourth last season and is seeking its first MHSAA title since 1965.

Country Day – The Yellowjackets have the other top seed and seven second seeds, although three of those second seeds were flight champions last season and are seeded second after falling to Cranbrook Kingswood players at the Regional. Noah Karoub will be looking to repeat at No. 1, while Jakob Gahn moved from No. 2 after winning No. 3 and Michael Khaghany moved to No. 3 after winning No. 4. Damian Runkle and Adam Junn are teamed up as the second seed at No. 1 doubles after Runkle won with a different partner last year and Junn was part of the title-winning pair at No. 2. They, Karoub and Gahn are all seeking their third MHSAA flight championships. No. 4 singles Alex Mettler is the team’s lone top seed.

Holland Christian – The Maroons are seeded at every flight with third seeds at six flights. Ryan Rhoades made the semifinals at No. 3 last season and is second-seeded at No. 2, and Mark Glover and Johan Buurma were semifinalists at No. 3 doubles in 2014 and are part of seeded pairs at Nos. 1 and 2, respectively.

Greenhills has won seven straight LPD4 titles and eight of the last nine, and cleared the field by 11 points a year ago. University Liggett was runner-up and St. Francis finished third at 22 and 21 points, respectively. Liggett last won a title in 2002, and St. Francis is seeking its first top-two finish.

Greenhills – The Gryphons' recent success has been based in doubles, with the team winning 11 of 12 flight championships over the last three seasons. Greenhills has a top seed and three second seeds at doubles this time, but also three top seeds in singles – No. 2 Sam Talsma, No. 3 Gage Feldeisen and No. 4 Andy Xie. Feldeisen was the champion at No. 3 in 2014, while Talsma was part of the champ at No. 1 doubles and Xie part of the No. 2 doubles winner. Brandon Johnson was Talsma’s partner and this season is part of the second-seeded No. 1 pair with Jack Harris.

University Liggett – The Knights are seeded at every flight, led by top seeds Casey Scoggin and Alec Azar at No. 3 doubles and Kester Stefani and Craig Buhler at No. 4. Alex Dow and Dave Sekhon were the runner-up last season at No. 2; Sekhon is teaming with Will Gersch to form the second-seeded pair at No. 2, and Dow and Thomas Van Pelt are third-seeded at No. 1. Second-seeded Christian Illitch at No. 2 has the team’s highest singles position.

St. Francis – Seven seeded flights will lead the Gladiators’ pursuit of its top finish ever, led by second seeds Tyler Spigarelli at No. 3 singles and Victor Casler at No. 4. Ryan Navin was part of the No. 4 doubles runner-up last season and teams with Joe Primeau as the third-seeded pair at No. 2.

Otsego’s Luke Ford – He’s the top seed at No. 1 singles after making the semifinals as the second seed last season.

Williamston’s Oliver Weaver – A quarterfinalist as an unseeded player last season, he was eliminated by Ford and enters as the second seed at No. 1.

Kalamazoo Hackett’s Henry Hedeman – Last season’s champion at No. 2 singles moves up a flight and enters as the third seed.

Whitehall’s Eric Butzer and Alec Milliron – The top-seeded pair at No. 1 doubles is made up of a No. 2 singles player from last season in Butzer and a No. 2 doubles player in Milliron.