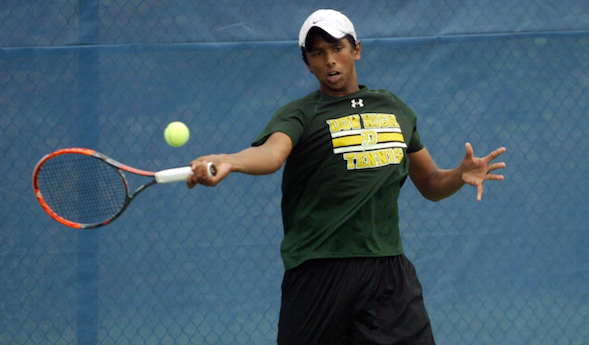 After placing second the last two seasons, the Chargers were determined to bring the title back to Midland this season.

That was exactly what Dow did, as the Chargers captured this year’s Division 2 tournament title at Hope College. Dow finished three points ahead of last year’s co-champions Grand Rapids Forest Hills Central and Portage Central.

Dow left no question as to which Division 2 team was the best. The Chargers totaled 35 team points, as they had players vying for championships in all eight flights. Forest Hills Central, winners of the last two Division 2 titles, placed second with 25 points, while last year’s other champion, Portage Central, and Okemos tied for third place with 18 points.

"Sometimes you forget how this moment feels,” said Midland Dow coach Terry Schwartzkopf. “Everything has to go just right. This feels really good.”

Dow received strong performances from its singles lineup as the Chargers won titles at No. 1 and No. 3 singles.

In one of the highlight matches of the finals, Midland Dow senior Varun Shanker held off Kalamazoo Loy Norrix freshman Reed Crocker in a marathon three-set match 7-6 (6), 3-6, 7-6 (8). Shanker, who won the No. 3 singles title as a freshman, closed out his high school career in a big way by outlasting Crocker in a grueling third set.

“I am really speechless at this time,” Shanker said. “I felt pretty balanced coming into the match today. It's a storybook ending. Our team had its share of ups and downs this season, but we pulled through at the end.”

Crocker, just a freshman, came into the tournament as the second seed behind Shanker and sent a message to the rest of the singles players in Division 2 that he will be a force to be dealt with the next three seasons.

At No. 3 singles, Midland Dow’s Tyler Conrad turned back Daniel Gorelik of Okemos 6-4, 6-2. Conrad was determined to claim the title as he finished runner-up at No. 3 singles last year.

Cameron Raedy of Portage Central proved to be a big surprise of the tournament in singles action. Coming in seeded fourth at No. 2 singles, Raedy upended top-seeded Gabe Vidinas of Birmingham Groves 6-4, 6-2 in the semifinals. Raedy closed out his memorable weekend in the finals when he defeated second-seeded Anish Middha of Dow 6-2, 7-5.

The title was actually the second straight for Raedy as he was part of Portage Central’s No. 1 doubles team that won last year.

“It's surreal right now,” Raedy said. “Last year I was state champ as part of the No. 1 doubles team, and to win it as the No. 3 singles this year is quite a two-year run.”

A pair of familiar foes met each other at No. 4 singles. Deniz Kalfa of Okemos brought home a title in another match of a lower seed defeating a higher seed when he upended top-seeded Saketh Kamaraju of Midland Dow. Kalfa, seeded second, defeated Kamaraju 7-6 (4), 6-1.

“It was a pretty tough season, but I want to thank my team for all the support they gave me,” Kalfa said. “I had lost three times to the player I played today, but during today's match I saw I could win this one, and that eased my mind."

In doubles action, Midland Dow used the same formula for success. Dow won at No. 1 and No. 3 doubles and placed runner-up at No. 2 and No. 4. 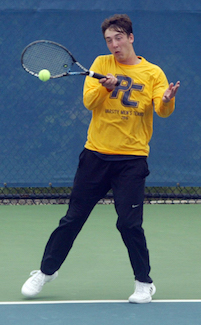 At No. 1 doubles, Dow’s top-seeded tandem of JJ Kirkman and Aditya Middha teamed up to hold off the second-seeded Grosse Pointe South team of Jack Williams and Ben Zacharia in a three-set struggle 7-5, 3-6, 6-4.

At No. 3 doubles, Dow pulled off an upset as the second-seeded team of Daniel Zhang and Gopal Parthasarathy turned back Forest Hills Central’s top-seeded duo of Peyton Herbert and Mike Battiste 6-2, 6-3.

The win was especially sweet for the Rangers duo as they had come up short during the regular season against the foes from Dow.

“I enjoyed every moment today,” Ziegler said. “We had lost to this Dow doubles team twice this year, but we were confident coming off winning the conference and Regional championships. Everything was clicking for us today.”

Ziegler’s partner was just as happy.

“This is an unbelievable feeling,” Rynbrandt said. “I am full of joy. We felt like they figured out us the first two times we played them this year, but today was our day. We executed this time; that was the difference.”

At No. 4 doubles, Birmingham Groves' third-seeded pair of Charlie Michaud and Aerik Joe downed Seaholm's fourth-seeded Aiden O'Neill and Will Appleford 6-2, 7-5. O'Neill and Appleford had downed Midland Dow's top-seeded Ryan Killmaster and Jeroen Uesback in three sets in the semifinal.

For Dow, regaining the Division 2 title was a total team and family effort with everyone pulling together.

“What I will remember about this group is the unity,” Schwartzkopf said. “It's been a while since we've had it, but this group really cared for each other. My captains and the parents also played a key role. They were the ones who paid attention to the little details, from stretching to nutrition. It made a difference this season.”

PHOTOS: (Top) Midland Dow’s Varun Shanker returns a volley during his championship match at No. 1 singles. (Middle) Portage Central’s Cameron Raedy pounds a return at No. 2 singles. (Click to see more from HighSchoolSportsScene.com.)