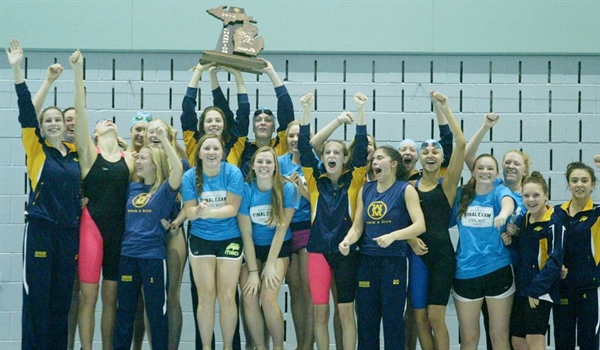 By Butch Harmon
Special to Second Half

He also expected the title to be decided in the final race.

And that’s exactly what happened as his 400-yard freestyle relay team edged Ann Arbor Skyline by six hundredths of a second to claim the deciding points and deliver Marian its third MHSAA title.

“During the 400 relay, I walked over to the Skyline coach and told her if you don’t think this is fun, holy smokes,” Thompson said. “She was tickled pink too.

“My hunch is that this was the best meet to be at. It was such a close finish.”

Portage Central took third with 219.5 points, followed by Dexter (215) and Birmingham Seaholm (211) to round out the top five.

Marian’s 400 relay of junior Christian Schott, sophomores Sophia Schott and Kailyn Swantek, and senior Mollie Pulte pulled it out for the Mustangs in the final event.

“We knew we had to win the 400 to win the meet,” Pulte said. “It was a close race and I was going up against Katie Portz, who I went up against in the 100 and 200 free(style) finals. I knew it was close at the end, but I didn’t want to let my teammates down. I’ve never had a greater feeling in my life. All the hard work of the last four years paid off. It’s such a great feeling.”

The two-day meet was a memorable end to her outstanding high school career.

Pulte, who set MHSAA Finals records last year in both the 100 and 200 freestyles, added a pair of individual titles to go with the team title this season. She won the 200 free in a time of 1:48.28 and by only 15 hundredths of a second.

Pulte, who is headed to the University of Florida to continue her career next season, won the 100 free in 50.21 and also broke her LP Division 2 Finals record in the 200 free in Friday’s preliminaries with a time of 1:47.88.

Winning the team title, however, was the biggest highlight.

“Friday I was swimming for myself, to have the best time,” Pulte said. “(Saturday), it was all about the team. All I wanted to do was to be the first to touch the wall. I just wanted to help my team get points and win the title. To go out as a senior with a team state championship, it was just the biggest day. There was no way I was going to let down the other 20 girls on the team. They were all behind me cheering me on, and I was not going to let them down.”

Pulte was not the only Marian individual champion. Sophia Schott won the 50 freestyle in a time of 23.66, by two hundredths of a second.

“I knew it was real close,” Schott said. “I just put my head down and went as hard as I could. I didn’t see the time at the end, but then all my teammates came up to me yelling and screaming and telling me I won. It was so exciting.”

Schott also got the Mustangs off to a fast start in the 400 free relay as the first leg. 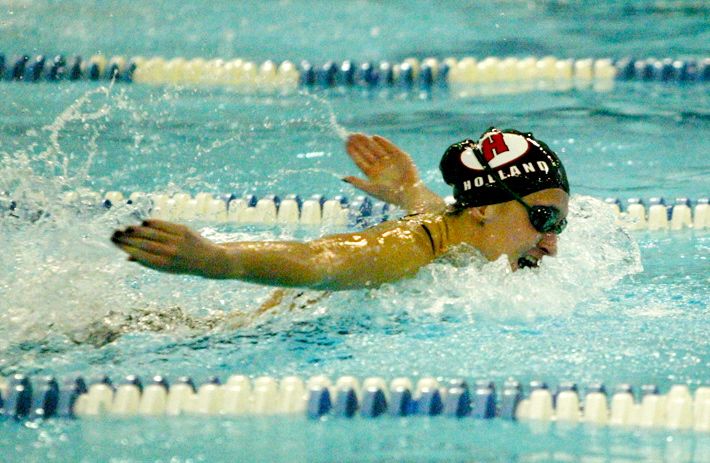 “It’s a feeling I’ve never felt before,” Schott said. “I’m so proud of everyone. It was real exciting, and everybody was so pumped up and so excited. We knew we had to have everyone step up.”

“It was not the superstars that win a meet like this,” Thompson said. “The kids that you don’t hear about were the ones who won the meet (Saturday). We needed the whole team to step up. It wasn’t about individuals; it was everyone on the team contributing to get this.”

For second-place Skyline, just being in the hunt was a big accomplishment. Skyline was on pace to finish fifth at the end of Friday’s preliminaries, but was keyed in part by a couple of close runner-up finishes by Portz.

“We never expected to be here,” Skyline coach Maureen Isaac said. “We had a pretty tough day (Friday), but the girls came back today. They scratched and clawed and came back today. We were not even in the hunt at the end of the day yesterday, but the heart that these girls showed was amazing. They refused to give up and just kept clawing back.”

The runner-up finish was the second in three years for Skyline, as the Eagles also placed second at the 2012 meet.

Saturday’s Final also provided a memorable end to the high school career of Holland senior Taylor Garcia. Garcia, who will swim at the University of Arizona next year, entered the finals with six individual titles and was also part of six relay winners as she helped Holland win the last three team titles.

While Holland finished 10th as a team this season, Garcia again enjoyed a big meet as she won both the 100 butterfly and 100 backstroke. Garcia set a new meet record in the 100 butterfly with a time of 53.95, which broke her record of 54.01 set last year.

“I really wanted to break my state record,” Garcia said. “I didn’t break it by much, but I’ll take it. It was very exciting winning it here in Holland. My family and friends were all here, and that meant a lot. It also meant a lot to do it here for the entire Holland community and our team.”

Krissy Harmon of Bay City Western wrapped up her high school career as a two-time Finals champion in the 500 freestyle. Harmon, who came in unseeded to win the 500 last year, was the top seed this time and swam a time of 4:55.38.

“I definitely felt a lot more pressure this year,” Harmon said. “Last year I barely had any pressure. This year I felt the pressure. It feels real good to win it again, and it is a relief. I’m really happy to end my high school career on a good note.” 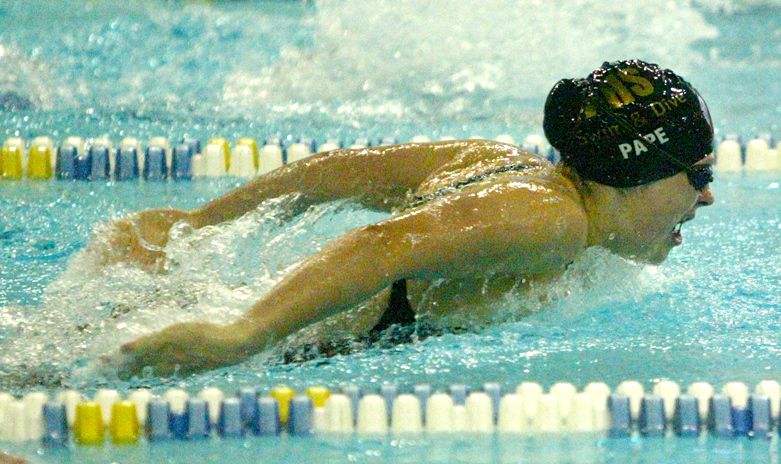 Harmon will be continuing her career at Oakland University next year.

Another record fell in the diving competition, where Grand Rapids Forest Hills Central sophomore Erin Neely set an LP Division 2 Final record with a score of 450.75. Neely finished third at last year’s Final and came into this year’s event with the top score from the Regional round.

Rochester Adams sophomore Nicole Pape also enjoyed this year’s Final much more than her first trip last year. In 2013, Pape experienced a case of food poising during the Final. This year, she was at full strength and won the 200 individual medley with a time of 2:02.74.

“It is so exciting to be here and win,” Pape said. “I felt like I was cheated last year, so I was so happy to make it back and be healthy.”