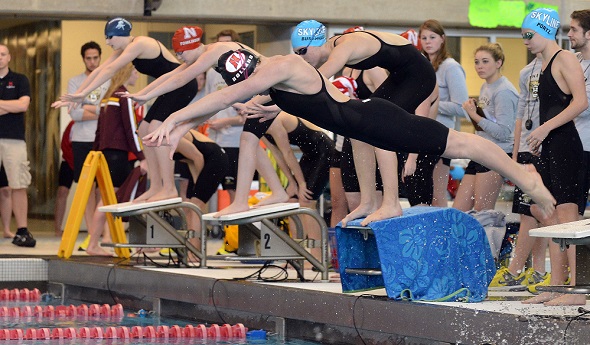 Farmington Hills Mercy and East Grand Rapids have spent their share of special moments atop the champions' podium at MHSAA Lower Peninsula Swimming & Diving Finals over the years.

They're favored to return this weekend after missing out on their familiar top spots a year ago. Holland, meanwhile, will attempt to keep pace and win its third straight championship in Division 2.

See below for team favorites and top individuals to watch at all three of this weekend's meets. Preliminaries are Friday, with championship races and diving Saturday. All three Finals also will be streamed live on MHSAA.TV and are available on a subscription basis.

Click for lineups and seed times for all three meets.

Team contenders: Top-ranked Farmington Hills Mercy finished second in Division 1 last season after winning five straight MHSAA titles from 2007-11, and has bounced back with 14 top-eight seeds heading into this weekend including all three highest-seeded relay teams. Saline, the champion in 2009 and 2010, is ranked No. 2 with only four top-eight seeds but a number of others in scoring position plus two contenders in diving. Ann Arbor Skyline, ranked No. 3, was the Division 2 runner-up last season and enters with six top-eight seeds including sophomore Katie Portz, seeded first in two events.

Ines Charles, Bloomfield Hills senior: She's seeded only fifth in the backstroke (58.53) but won the title in Division 3 last season while at Lahser before her school and Andover merged for this fall and the new school was big enough to move to Division 1.

Maddy Loniewski, Farmington Hills Mercy junior: Last season’s 200 individual medley champion is seeded fifth in that race (2:06.44) and fourth in the 100 freestyle (52.29), plus she swims on two of the top-seeded relays.

Elliott Schinella, Farmington Hills Mercy senior: The 2012 100 backstroke champion is poised to repeat entering with the top seed time of 56.02 plus the seventh-fastest (24.5) in the 50. Like Loniewski, she swims on two Mercy relays.

Miranda Tucker, Waterford United junior: This will be the first high school Finals for Tucker, and she’s set up to succeed quickly with top seeds in the 100 breaststroke (1:02.36) and 200 IM (2:01.98). Her breaststroke time would break the LP Division 1 Finals record and approach the overall Finals record of 1:02.10 set in 2010.

Maddie Wright, Waterford United junior: Wright has won a pair of MHSAA titles in each of her first two high school seasons and is the LP Division 1 Finals record holder in the 100 butterfly. She enters that race as the top seed (54.74) and is second to Portz in the 200 freestyle (1:49.55).

Amy Stevens, Saline freshman: In just her first season, Stevens won a tough diving Regional with a score of 451.15.

Farmington Hills Mercy 200 freestyle relay: Schinella, Loniewski and juniors Kathleen McGee and Roxanne Griffore enter as the top seed in this race and with a strong opportunity to set an LP Division 1 Finals record – their seed time of 1:35.41 would just edge the record set by Hudsonville’s team in 2011.

Team contenders: Top-ranked Holland is looking to run its MHSAA title streak to three (and top-two finish streak to six) led by some of the most experienced standouts in any division and 14 top-eight seeds. Bloomfield Hills Marian is ranked No. 2 and looking for its first title since winning back-to-back in Division 3 in 2007 and 2008; the Mustangs could make things interesting with eight top-eight seeds. Portage Central finished fourth last season and is ranked No. 3 heading into the weekend, and has five top-eight seeds plus a number of others who should score from places 9-16.

Taylor Garcia, Holland junior: One of the best in Michigan regardless of division, Garcia already has won four individual and four relay titles and is the top seed in the 100 backstroke (54.14) and 100 butterfly (54.60). She set the butterfly LP Division 2 Finals record in 2011.

Mollie Pulte, Bloomfield Hills Marian junior: Last season’s 200 freestyle champion should have her eyes on two more titles – and potentially two LP Division 2 Finals records. She’s the top seed in both the 200 free (1:49.56) and the 100 free (50.23), with her 200 time faster than the current Division 2 record and her 100 time only 27 hundredths of a second off that division best.

Holly Morren, Holland senior: She won the 100 freestyle last season and has been part of four title-winning relays, and she could claim two more individual titles in her final high school meet. Morren is the top seed in the 50 freestyle (23.51) and the second seed to Pulte in the 100 (51.20).

Nicole Pape, Rochester Adams freshman: She could finish Saturday as the most celebrated freshman of the Finals entering with top seed times in both the 200 individual medley (2:05.23) and the 100 breaststroke (1:04.21). She also will swim on two strong relays.

Bloomfield Hills Marian 200 freestyle relay: Pulte is joined by sophomore Maren Taylor, junior Hannah Richard and freshman Sophia Schott on a team that has swam 1:35.73, 41 hundredths of a second off the LP Division 2 record set in 2010.

Team contenders: Arguably the most accomplished program in MHSAA history, East Grand Rapids is ranked No. 1 and favored to win its first championship since 2010. The Pioneers have 12 top-eight seeds and enter with the fastest teams in all three relays. Second-ranked Bloomfield Hills Cranbrook-Kingswood has won Division 3 the last two seasons and won’t fall quietly starting out with eight top-eight seeds. If No. 3 Holland Christian can move past both into the top spot, it would earn its first title since winning Class B in 1996.

Hannah Kopydlowski, Flint Powers Catholic senior: The reigning 50 freestyle champion is the favorite again with the top seed time of 24.10. She also has the second-fastest seed time in the 100 backstroke (59.04).

Jennifer Wagley, Adrian senior: The reigning 100 butterfly champion returns with the fastest seed times both in that race (57.46) and the 200 individual medley (2:09.54).

Kim Jones, Plainwell junior: The reigning Division 3 champion defended her Regional title with a score of 463.1 points to earn her return to the Finals.

East Grand Rapids 200 freestyle relay: Converse is joined by senior Anna Stephens and freshmen Lexus VanHoven and Hanna Sanford on a team that has gone as fast as 1:38.24 – 37 hundredths of a second off the LP Division 3 record.