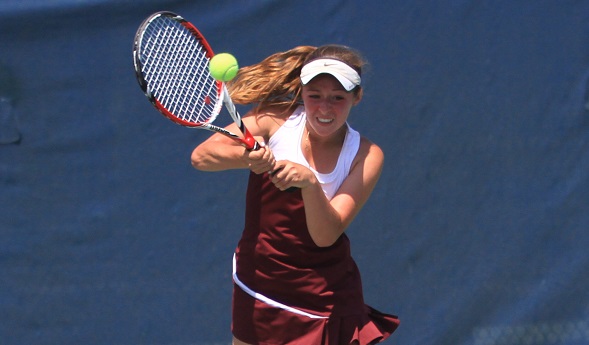 But a few have opportunities to cement themselves in the MHSAA record book as well.

Meanwhile, Okemos’ Emily Struble can repeat as No. 1 singles champion in Division 2 – and finish her career with four individual titles, becoming just the fifth player to accomplish that feat. Utica’s Davina Nguyen and Kalamazoo Christian’s Audrey Bouma can join a group of 15 who have won three MHSAA flight championships.

Coverage of all four Finals will be published on Second Half later Saturday evening. Below is a brief look at top contenders at each tournament, with play beginning Friday morning. Click for more including brackets and seeds for all 32 flights.

Northville: A sweep of doubles certainly would carry Northville far in its title quest, and the Mustangs are seeded first at all four of those flights with Anika Mukherji and Reeshma Kumar at No. 1, Paige Baal and Claudia Ma at No. 2, Jordan Hermiz and Amelia Albanelli at No. 3 and Serena Wang and Molly Bis at No. 4. Hermiz was part of last season’s No. 3 champion. All but one flight is seeded, and No. 3 singles Joanne Gao also earned a top spot heading into the weekend.

Midland Dow: All eight flights are seeded as Dow aspires to ascend from last season’s tie for seventh place. No. 2 singles player and freshman Jessica Brown is the top seed at her flight, and Elaina Parrillo is the second seed at No. 3 after finishing runner-up at No. 4 in 2014. Top singles player McKenna Root missed last season with injuries but has returned and signed to play next season at the University of Alabama-Birmingham.

Grosse Pointe South – The Blue Devils return one singles player and a doubles pair who won championships last season plus two more previous singles champions. Grosse Pointe South has claimed No. 4 singles the last three seasons with Maggie Sweeney (now No. 1 doubles) in 2012, Madie Flournoy (now No. 3) in 2013 and Maddie Paolucci (second seed at No. 2) winning the flight last spring. Kelly Beardslee and Ginny Hayden are the second seed at No. 2 doubles after winning No. 4 last year, and Morgane Flournoy was part of last season’s No. 2 runner-up and will team with Sweeney at No. 1. Raven Neely is the second seed at No. 1 singles after making the semifinals last season.

Utica’s Davina Nguyen: The senior standout can finish with her third championship at No. 1 singles to go with last season’s and her 2012 title. The future Michigan State University player enters as the second seed, however, after losing her Regional Final match to Ava Thielman (see below).

Utica Eisenhower’s Ava Thielman: Eisenhower’s sophomore defeated Nguyen in three sets two weeks ago and also defeated her in an eight-game set earlier this season. Thielman was unseeded last season and made the quarterfinals; her only loss this season is to Struble of Okemos, according to an Oakland Press report.

Clarkston’s Isabella Spindler: The Wolves’ junior moved up to No. 1 singles after finishing runner-up at No. 2 as a freshman and making the semifinals of that flight last season. She enters as the fourth seed this weekend.

One of these three teams has won Division 2 every season dating to 2003. Forest Hills Northern owns eight of those titles and split last year’s with Seaholm – with Marian finishing third after winning most recently in 2013.

Forest Hills Northern: The Huskies’ strength should continue to shine. Reigning champion Madeline Bissett at No. 2 singles and runner-up Sydney Whitfield at No. 4 return as top seeds at those respective flights, and No. 1 runner-up Claire Aleck is back as a third seed at that flight. Forest Hills Northern also won two doubles flights last season and are top-seeded at two again with Felicia Zhang and Maansi Dalmia at No. 2 and Lizzy Vanharn and Denise Bilbao at No. 4.

Bloomfield Hills Marian: The Mustangs should make another push with veterans at the top of the lineup. Breann Lungham is unseeded at No. 1 singles but won No. 3 in 2013 and made the quarterfinals at No. 2 a year ago. Sophia Belardo returns as champion at No. 4, and McKenna Landis (No. 1 doubles) and Marta Colisimo (No. 4) were part of runner-up pairs last season at Nos. 2 and 4, respectively. Landis and Bianca Emde are the top seed at No. 1.

Okemos’ Emily Struble: The reigning champion at No. 1 singles is top-seeded and also won No. 2 as both a freshman and sophomore. She beat Aleck in three sets in last season’s championship match.

Mason’s Olivia Hanover: The Bulldogs’ sophomore enters as the second seed at No. 1 singles while playing her first Finals – her team didn’t make the tournament last season, when she played No. 2 singles behind 2012 No. 1 singles champion Abby Perkins.

Portage Central’s Lauren Lomax: She took Struble to 7-5, 6-3, in last season’s quarterfinal as a junior and returns as the fourth seed at No. 1 for the second straight season.

Fenton’s Madison Ballard: She took Aleck to three sets in last season’s semifinal at No. 1 and returns as the fifth seed after entering as the third in 2014.

Cranbrook Kingswood is looking to extend its championship streak to five straight. The Cranes cleared Detroit Country Day by 11 points last season, and Country Day also finished runner-up in 2011 after winning in 2010.

Cranbrook Kingswood: All eight flights are again seeded, but unlike last season – when the team had six top seeds – the Cranes have none. Four flights are seeded second, however, and six players were part of flight championships last season. Reigning No. 4 singles champion Jazz Teste is seeded third at No. 3 this weekend. Meg Phyle (No. 1 doubles) and Amanda Simmons (No. 2) won the No. 1 doubles championship last season; Simmons is now teaming with reigning No. 2 doubles champ Amanda Twu at that flight while 2014 No. 4 doubles runner-up Sloan Wysocki has joined Phyle at No. 1. Mackenzie Beckett is back at No. 3 doubles after being part of that champion last year and will pair with Sauma Du, who was the other half of the No. 4 runner-up.

Detroit Country Day: A strong singles lineup should key the Yellowjackets’ contention; No. 2 Haley Mullins, No. 3 Sadina Fadel and No. 4 Sarah Carroll all are top seeds, while No. 1 Sasha Hartje is a second seed. Mullins and Carroll were runners-up at the same flights in 2014, and Sharmila Prabhu was part of the runner-up pair at No. 3 doubles; she and Tara Tang are the fifth seed at that flight this weekend.

Grand Rapids Christian: The Eagles finished only four points behind Country Day last season and carry eight seeds into this weekend with powerful doubles teams. Three pairs are top-seeded: Olivia DeVos and Caroline Heule at No. 2, Natalie DeBoer and Kate Zwiers at No. 3 and Emily Schellenboom and Rachel Koopman at No. 4. DeVos and Heule were runners-up at No. 2 last season, and Koopman was part of the No. 4 champion.

Academy of the Sacred Heart is looking to return to the top after winning LP Division 4 in 2012 and 2013 and finishing sixth a year ago. St. Francis was third and Ludington fifth in 2014. Grosse Ile, last season’s champion, moved into Division 3 for this school year.

Academy of the Sacred Heart: Junior Jeannie Nash adds a top seed at No. 1 singles to four top-seeded doubles pairs: Selina Fuchs and Abby Hildebrand at No. 1, Sara Gerard and Kendall Gassman at No. 2, Tate Lehmann and Kathryn Monahan at No. 3 and Stella Betrus and Sarah Panone at No. 4. Gretchen Lemon was part of last season’s champion at No. 1 doubles, and this weekend she’s seeded fourth at No. 2 singles. Lehmann was the No. 4 singles champ in 2013.

Traverse City St. Francis: Four of the team’s five seeds are in singles, where Natalie Burke is the top seed at No. 3 and Anne Bandrowski the favorite at No. 4. Rosemary Wilson has an MHSAA flight championship to her credit, at No. 3 doubles last season; she and Nicole Ehardt are seeded fifth at No. 2.

Ludington: The Orioles also are seeded at five flights, with Julie Maltbie and Claire Flewelling at No. 2 doubles the highest as a second seed. They were runners-up up at No. 3 doubles last season. Brooke Schneider and Olivia Laman were last season’s champions at No. 2 doubles; this weekend, Schneider is playing No. 1 singles while Laman is teaming with Stephanie Kelley as a the sixth seed at No. 1 doubles.

Lansing Catholic’s Calla Ramont: Last season’s No. 1 singles runner-up is only the sixth seed heading into this weekend after entering the 2014 Final as a third seed. She won No. 3 singles in 2012.

Kalamazoo Christian’s Audrey Bouma: After winning No. 3 singles the last two seasons, Bouma is moving up to No. 2 – and is the top seed at that flight.

PHOTO: Okemos’ Emily Struble, here during last season’s No. 1 singles championship match at the Lower Peninsula Division 2 Final, is among a number of past winners looking to reign again.