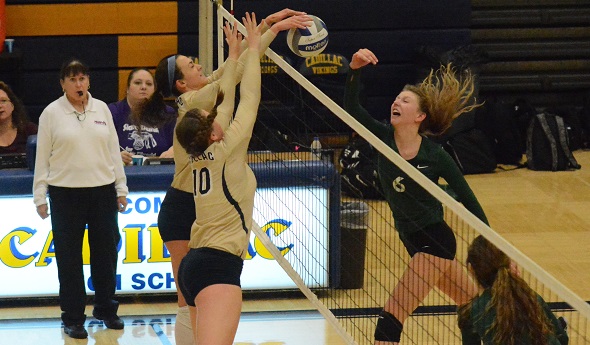 It's been quite a run for coach Michelle Brines and her Cadillac Vikings volleyball program.

Cadillac is in the Elite Eight once again, this time with one of its most well-rounded teams in Brines' 16 years as head coach.

Optimism is high as the Vikings begin this week with their ultimate tournament goal still in play – to reach Saturday’s MHSAA Class B Final, which would be a program first.

The Vikings know it will not be easy. Cadillac faces defending champion North Branch in a Quarterfinal rematch tonight. The Broncos ousted Cadillac 3-0 a year ago.

The Vikings enter the match ranked No. 5 in the latest coaches poll, North Branch No. 8. The Broncos upset No. 2 Mount Morris in the District.

“They’re a good team, but they graduated seven seniors last year,” Brines said of North Branch. “I told the girls, ‘Forget about what it says on their jerseys. This is not the same team that beat us in three last year.’ Yes, they’re good, they have a history, but I like our chances. We just have to go out and perform, play the way we’re capable of playing.”

Brines, who has close to 650 career wins, has an experienced squad  with senior outside hitter Morgan Briggs, junior setter Ali Finch, junior middle hitter Kylie Christensen and sophomore outside hitter Gabby Kapuscinski among the key returnees from last year.

Brines is hoping that experience will pay dividends in helping her players deal with the pressure.

Briggs thinks it will.

“We hold ourselves to a high standard so pressure is a good thing, in my point of view,” she said.

Briggs, who will play at Lake Erie College next season, leads the team in kills and also plays the middle on serve-receive. It’s her passing in that role that often starts the offense.

Finch, meanwhile, is the main distributor, although she can put it down, too.

“She jumps sets,” Brines said. “She’s 6-foot and really attacks the ball. The defenders are never sure if she's going up to hit or set – and where she’s setting to.” 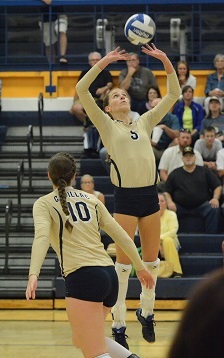 Christensen is second to Briggs in kills.

The Vikings, who are 45-4, shared the Big North Conference title with Traverse City West, which competes in the Class A Quarterfinals tonight. The two teams split matches during the season. Cadillac’s only other losses are to Grand Rapids Christian, another Class A quarterfinalist, Temperance-Bedford and Mount Morris.

“We played more tournaments downstate, played some harder teams, and I think we made a name (statewide) for ourselves,” Briggs said.

Cadillac already had that name recognition in the north. It's been fostered by years of success with the tradition carried on by this year's team.

In its last three matches, Cadillac beat Kingsley in the District Final and swept Big Rapids and Houghton in the Regional.

"They play really good defense,” Kingsley coach Dave Hall said. “And they don't make mistakes, they don’t beat themselves. They put a ton of pressure on you by just keeping the ball in play. They keep coming at you and don't give you points.

Brines credits several factors for Cadillac’s continued success – introducing girls to volleyball as early as second grade, continuity in the coaching staff, and dedicated players who put the work in during the offseason.

“I’m fortunate that my players are willing to put extra time in during the summer because they play other sports, too,” she said. “I try to be realistic because I don't want to dominate their time. We have a lot of two- and three-sport athletes.”

Playing multiple sports keeps some of the girls out of club volleyball during the offseason, but Brines is fine with it.

Repeated success in volleyball helps generate enthusiasm for the program throughout the school – even at the elementary level, where high school players coach and mentor girls in a winter program for grades 2-6.

“We used to start (girls) in fourth grade,” Brines said. “But they play basketball that young (second and third grade) so why not volleyball? We like to get them introduced to it because it's not (a sport) that most kids play outside at home like basketball.”

Briggs is one of those players who became hooked on the sport early. Then again, there were family ties. Her older sister, Taylor, played. Taylor went on to become a floor captain and all-state player, graduating in 2012. Now Morgan is following in her footsteps.

There’s one thing Morgan Briggs is hoping to change, though. Taylor’s last game was a Quarterfinal loss to eventual Class B champion Fruitport in 2011. Morgan would like to extend her senior season a little longer than that.

“We always focus on one game at a time – we don't look (past) anybody – but our goal is to be in the Final Four and make it to Saturday,” she said.

If it doesn’t happen, however, Briggs said she feels fortunate to be part of this team.

“No matter if we win or lose, I have the best girls I could ask for (as teammates),” she said. “They have the same mentality to win as I do. I'm really lucky that I can go through this playing next to my best friends.”

PHOTOS: (Top) Kylie Christensen (10) and Morgan Briggs put up a block during a match this season. (Middle) Ali Finch (5) sets as Christensen prepares to hit. (Photos by Susan Baker.)