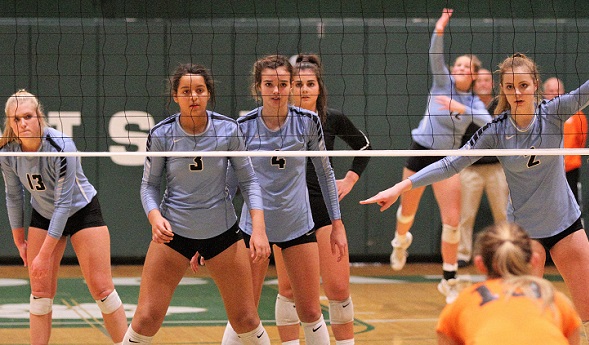 “We talked about how coming off such a big win on Thursday can sometimes be difficult and to stay up for the next match,” Grand Rapids Christian coach Tiffannie Gates said. “We addressed it, we talked about it, but I still feel that’s what happened. I don’t think that was the whole thing, but I think it was part of it.”

The defeat ended the Eagles’ hopes of a second trip to the MHSAA Semifinals in the last three years, while also ending the on-court mother-daughter career of Gates and her oldest daughter, Maddy.

Maddy Gates played four years on the varsity with her mother at the helm.

“We got along this season like we’ve never gotten along before, and it was definitely a bonding experience for both of us,” said Maddy Gates, who’s headed to Division I Purdue University-Fort Wayne to play volleyball next fall.

“Knowing that I will never play on a high school team again with her made it pretty hard (Tuesday) night as well, but it was good. We have a lot of memories from this season, and I really appreciate everything she did for me this year.”

Tiffannie Gates has coached her daughter off and on since Maddy was 10. That made the last match an emotional one.

“It was really hard because she really thought we were going to go all the way this year, and to see her kind of devastated was pretty heart-breaking,” Tiffannie Gates said. “But it was neat that we got as far as we did and had that extra time together in the gym – and also to experience that fun win on Thursday.

“Coaching your own daughter is hard, but it’s worth it – to have those moments together and to be able to spend so much time with her her senior year before she goes away to college soon.”

Tiffanie Gates actually had the opportunity to coach both her daughters for the first time. Jordyn Gates was a sophomore setter for an Eagles’ squad that went 43-7 and won the Ottawa-Kent Conference Gold crown with a perfect 12-0 mark. 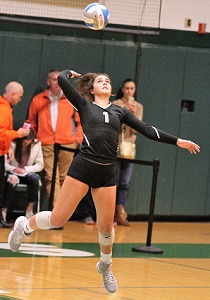 “It was awesome to be able to coach both of them,” Tiffannie Gates said. “I was a little nervous having them both fighting, but there was minimal fighting and it was really fun to enjoy the success of the team together and to see them interact with their teammates. I couldn’t have asked for a better experience.”

The trio were a part of an instant classic that helped the Eagles reach the Quarterfinals.

Grand Rapids Christian pulled out a thrilling five-set victory over top-ranked Rockford, a team the Eagles lost to twice during the regular season.

“We just came out with nothing to lose and with the mindset of playing our best volleyball,” Tiffannie Gates said. “They did that, and it was a phenomenal match. It went five (games) and it was 19-17 in the fifth.

“It was super intense and I had literally 10 people tell me that it was the best, not only volleyball match, but high school sporting event they’ve ever been to. It was so fun, and you felt bad that anybody had to lose because the girls on both sides just fought to so hard.”

Maddy Gates said the victory was the highlight of her season.

“We had a lot of good wins this season, but that was probably the best because going into it, technically, we were not supposed to win considering the rankings but we played with so much heart and passion,” she said. “We would’ve done anything to win that game, so pulling it out and winning that was huge for us.”

The Eagles lost their District opener to East Grand Rapids in 2016, but vowed not to look past anyone this time around.

“I think our seniors were diligent in making sure our team focused on each match and one point at a time,” Tiffannie Gates said. “They learned from last year.”

The success of the season made the Eagles’ last loss that much harder to swallow.

“It was pretty difficult for me, and not just because I’m a senior, but because the team chemistry was so amazing,” Maddy Gates said. “Having to say good-bye to all the girls and knowing it was our last time playing together was really tough. I think they caught us on a bad night, and I’m still wrapping my head around what happened, but it was definitely a learning experience.”