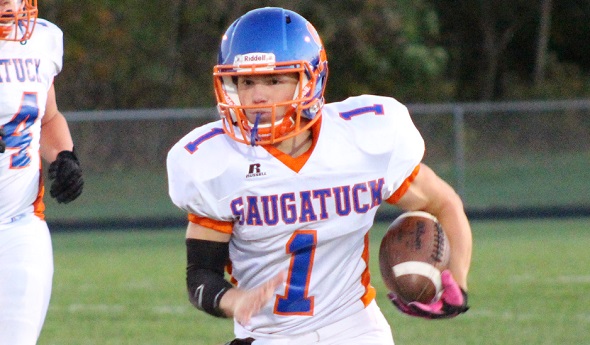 Blake Dunn is one of the finest all-around athletes in Michigan, a four-sport star for Saugatuck who will go on to play baseball at Western Michigan University this fall.

But his most notable accomplishments may have come on the football field, and his name appears 19 times in the MHSAA record book for that sport.

Dunn, as quarterback this past fall, scored 323 points – third most in MHSAA history – to graduate with a four-season total of 827 points, which ranks second all-time for a career. He scored 42 total touchdowns as a senior to finish with 113, fourth on that career list, and his 101 career rushing touchdowns also rank fourth in that category. His 6,954 career rushing yards rank eighth all-time, and his streak of 26 straight 100-yard rushing games ranks third.

Dunn also made lists for kicking extra points, passing touchdowns, kickoff return touchdowns (four this past season tied for second-most) and for a 100-yard interception return.

As might be expected, Saugatuck as a team scored more than 500 points each of the last two seasons, finishing both 10-1. Its 53.5 ppg average this past fall ranks eighth all-time.

Click to see the football record book in full and read on for more of the latest additions for girls and boys basketball, hockey, softball, volleyball and wrestling.

Alma’s Maddy Seeley capped her high school career in 2014 with a record-setting performance in a 68-62 Regional loss to Freeland. Seeley made all 21 free throws she attempted, breaking the previous girls basketball record by one for consecutive free throws in one game. Those 21 free throws also are tied for third most in a game, as she scored 39 points total. Seeley currently plays at Northwood University.

New Lothrop teammates Monica Confer and Amber Sammons graduated in 2010 among the winningest players in MHSAA girls hoops history. The two four-season standouts finished with a career record of 97-11 and Class D titles in 2008 and 2009. Confer went on to play at Davenport and then Northwood University, while Sammons played at Schoolcraft and then Rochester College.

Trenton needed a big fourth quarter to come back against Wyandotte Roosevelt on Jan. 17 – and got one of the biggest in Michigan high school history. Trenton scored 42 points – tied for fifth most in a quarter – to edge Roosevelt 73-72 after trailing 50-31 heading into the final period. Joel Childers scored 13 points with four 3-pointers to lead the barrage.

New Baltimore Anchor Bay senior Joey DeMarte played himself into the MHSAA records for scoring prowess twice within four days this winter. On Jan. 21, DeMarte score three goals within 37 seconds – at 8:06, 7:54 and 7:21 of the second period – in an 8-0 win over Utica to move into second place for fastest three goals by one player in one game. On Jan. 24, he had five goals during the second period of a 14-0 win over Port Huron to also rank second for most goals in a period.

Middleville Thornapple Kellogg keeper Aly Miller capped her career last spring on the MHSAA career shutouts list despite missing all of the 2014 season with an injury. She graduated with 39 shutouts over 60 games in 2013, 2015 and 2016, and was added for single-season shutouts for a second time with 13 a year ago. Middleville Thornapple Kellogg as a team made the list for fewest goals given up with seven in going 16-2-2 in 2016. Miller plays now at Webster University in Missouri.

Rockford setter Hailey Delacher upped her number of entries in the MHSAA record book to 12 in leading her team to a Class A runner-up finish in the fall. Delacher, who already had the record for most assists in one match (67 in 2015), added four more entries to the category as a junior while coming on especially strong during the playoffs – her season-high 54 came in the Semifinal, with 49 in a Quarterfinal, 46 in a Regional Final and 53 during the regular season. Her 1,635 assists this past season rank fourth since the start of rally scoring in 2004-05, and she moved into 10th on the career list with 3,802 assists and a season still to play.

Wyoming Godwin Heights enjoyed a strong senior season to end a record-book career for senior middle Mya Jordan in the fall. Jordan made the single-season kills list with a career-high 622, and with those also made the career kills list with 1,569 over four seasons. Senior teammate Tony Henry also made the record book with 128 aces for the season, including 11 in a three-set match against Wyoming Lee. Godwin Heights won its first league title in the fall in 17 years.

Grand Rapids Christian junior Desean Bryant became the first in MHSAA history to achieve a pin in six or fewer seconds at 112 pounds when he did so in a match during the Traverse City West Invitational on Dec. 28. That win was Bryant’s ninth straight to start the season.

PHOTO: Saugatuck’s Blake Dunn rushes toward an opening upfield during a game his junior season. (Photo courtesy of the Saugatuck athletic department.)