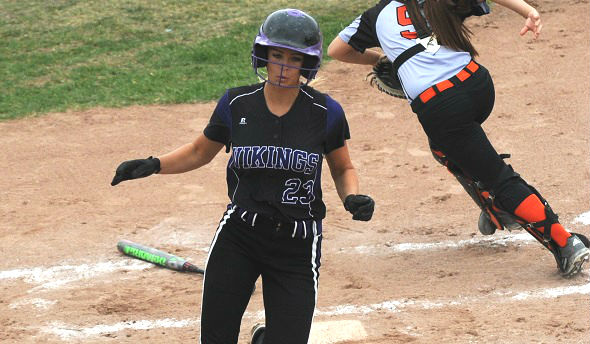 Saginaw Swan Valley's softball team has played in five MHSAA Finals and won one championship over the last 30+ seasons – and now has a significant presence in the MHSAA record book as well.

Read on for more recent record book additions in girls and boys basketball, football, girls soccer, softball and wrestling, and click the headings for each sport to see those record books in full.

It’s been noted a few times that Pittsford’s Jaycie Burger and Maddie Clark finished their careers as the winningest players in MHSAA girls basketball history with matching 103-2 records over the last four seasons. But they also earned a number of record book entries along the way. Burger’s name appears nine times, including for 229 career 3-pointers (10th all-time) and 605 career assists (fifth). Clark appears in the records five times, with her 1,119 career rebounds ranking 10th on that list. Junior Marissa Shaw was added for her 179 steals in 28 games this past season – which tied her for fifth most in that category. Pittsford finished a second straight undefeated season with a second straight Class D title and is riding a 55-game winning streak. Burger will play basketball next season at Hillsdale College, and Clark will play volleyball there.

Skyler DeMeyer didn’t score a point for Centreville in its 66-25 win over New Buffalo on Jan. 6 – and didn’t have to, instead making the single-game assists list with 14. DeMeyer was a senior for Centreville, which finished 19-2.

Tawas’ Morgan Kaniszewski played a major role in her team’s Class B District title run and 15-9 season, making 81 3-pointers – tied for 13th most all-time. The Braves’ junior also connected on 16 of 16 free throws in the District Final win over Gladwin, making the lists for most free throws in a game and most consecutive in a game (tying for eighth in the latter).

Opponents of Onsted through the middle seasons of this decade knew better than to challenge the Wildcats regularly in the post. Austin Davis – now at University of Michigan – graduated in 2016 with 1,078 career rebounds, fifth most in MHSAA history, and his 414 as a junior tied for 11th most in one season. Davis also graduated with 297 blocked shots, tied for eighth most on that list. Teammate Devin Louden, a 2014 graduate, is just ahead with 300 blocked shots from his three-season varsity career. Davis was 6-foot-10 in high school, while Louden was 6-8.

A pair of Okemos sharpshooters were added for their free throw and 3-point work at the start of this decade. Chris Harrison-Docks was added for 178 3-pointers, 396 free throws made and an .807 free-throw percentage from 2010-12, plus 176 free throws made during the 2011-12 season. Conner George was added for 174 free throws in 2014-15, plus an .807 percentage from 2014-16. Meanwhile, Taylor Moton – who went on to play football at Western Michigan University and was drafted by the Carolina Panthers this past weekend – was added for 342 rebounds during that 2011-12 season. Harrison-Docks finished his college career this season at DePaul after three seasons at Western Kentucky, and George plays at Michigan State after joining the team as a walk-on in 2015-16. Okemos as a team was added for scoring 75 points in a half of a 123-73 win against Mason in 1980, and three times for free throws attempts – its 633 in 2011-12 rank fifth on that list. The Chiefs also made 418 free throws that season, which ranks fourth, and are listed with Holt as part of the game tied for third-most for free throws between two teams: Okemos had 27 and Holt 36 in a 94-86 Rams win on Feb. 10 of this season. Holt’s 36 makes also made the list for most converted free throws by one team in a game.

Pewamo-Westphalia followed 8,000-yard rusher Jared Smith with one of the most prolific offenses ever last fall in winning the Division 7 title. The senior running back capped his career third in points (806) and total touchdowns (124), second in rushing yards (8,182), seventh in rushing attempts (808) and with the records for career rushing touchdowns (123) and consecutive 100-yard rushing games (33 from 2014-2016). The Pirates scored 645 points, 13th most all-time, while running for 4,067 yards and amassing 5,027 total yards with 81 touchdowns including 68 rushing. The Pirates became the first entry in a number of recently-added team offense categories and moved to the top of the list for interceptions in one game with eight in a win over Potterville. They also joined the list of teams with at least 19 straight winning seasons by posting their 21st consecutive, giving them the fifth-longest streak in the state. In addition to Smith’s numerous individual entries, teammates Devon Pung (29 tackles for losses), Mason Schneider (three interception touchdown returns in one season) and Reece Platte (10 extra points in one game, against Bath) also were added. Pung and Platte also are seniors, and Schneider is a junior. Smith will continue this fall at Michigan Tech.

Fruitport Calvary Christian’s Brianna Zehr made a four-year impact before graduating in 2014. She had 42 goals that season to make the single-season scoring list, and 101 total over four seasons to make the career list as well. Zehr went on to play at Olivet Nazarene University in Illinois.

Blissfield senior Brooke Henning made the MHSAA single-season home runs list both with 14 last spring as a junior and 11 as a freshman. Those 25 combined alone (not counting her sophomore total) also would put her on the career list; she is finishing this spring and will play collegiately at Grand Valley State.

Brandon Garcia never made the MHSAA single-season wins list, but finished his four-season varsity career in 2016 with 213 and only 14 losses after winning at least 50 matches all four of his seasons. Garcia also made the career pins list with 130. He finished as an MHSAA Finals runner-up twice.