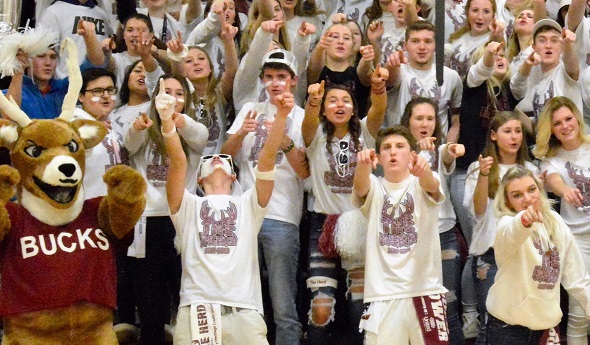 Neighbors present and past filled Buchanan’s gym a week ago to celebrate the 40th anniversary of the school’s 1978 Class C boys basketball championship. 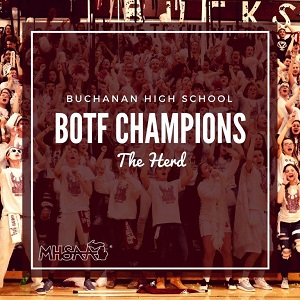 In their midst, another champion built its case to make the community proud once again.

Buchanan's "Herd" is our Battle of the Fans VII champion, adding to its BOTF II title and adding another point of pride for a community that turns out big to support its school, and vice versa.

"This all couldn't have been possible without our community, the support of our teachers and staff," Buchanan senior Jessica Lee said. "The businesses put 'Good Luck to The Herd' (on their windows). Just the whole town supported us. We both represent each other in a way."

Buchanan will accept its Battle of the Fans VII championship banner during halftime of the first Class B Boys Basketball Semifinal on March 23 at Michigan State University’s Breslin Center. Boyne City and Petoskey also have been invited to Breslin to be honored for this season’s achievement.

Buchanan was chosen based on a vote by the MHSAA’s 16-member Student Advisory Council influenced by public vote on the MHSAA’s Facebook, Twitter and Instagram sites. A total of 9,309 social media votes were received, with those results then equated against a school’s enrollment. This year’s results came out to 5.2 votes cast for every student attending one of our finalist schools – the second-highest average in Battle of the Fans history.

The Council based its vote on the following criteria: positive sportsmanship, student body participation, school spirit, originality of cheers, organization of the group, section leadership and overall fun. New this year, nine semifinalists were selected from the original application group before Boyne City, Buchanan and Petoskey were chosen for MHSAA visits. Cedar Springs, Charlotte, Munising, Negaunee, Pellston and Traverse City West also were among semifinalists.

Buchanan totaled the most public social media support, finishing first across all five ways votes were accepted (Facebook likes and shares, Twitter re-tweets and likes and Instagram likes). Votes were scaled to take into account a school’s size – Class B Buchanan's were worth more than Class A Petoskey's, for example – but The Herd also received the most social media votes total.

Other numbers to consider from this season's contest: The application videos have been watched more than 15,600 times, and the MHSAA-produced videos from our tour stops have more than 2,100 views. The stories detailing the three tour stops plus Tuesday’s explanation of how to vote and the announcements of semifinalists and finalists had been viewed 6,600 times as of 8:30 this morning. The three Snapchat stories covering our visits were viewed nearly 6,000 times combined.

This year’s expanded Battle of the Fans gave us an increased opportunity to see more of our state’s best student sections in action not only longer, but at more levels beginning with organization and planning all the way through execution of some incredible efforts all over our state. Our finalists tour then provided a chance to visit three sections we’ve come to know well – and to see how those sections have grown in their energies and efforts to support their schools and classmates the right way.

Below are our final takeaways from each of those trips.

What we saw: This was the second straight year we visited Boyne City for Battle of the Fans, and we were blown away again not just in the promotion by the student-centered Rambler Sports Network leading up to our visit, but by the production of all facets of a game night done right by the Rambler Rowdies and their all-star leaders. It’s impossible to talk about Boyne City’s section and not immediately bring up Captain Rowdy, the inflatable giant mascot funded and purchased by the student section before the start of this school year. As one of the Rowdies leaders said during our pregame meeting, the opportunities to enjoy the new superhero’s antics are endless – and the upside-down head-bouncing Captain Rowdy dance was one of the highlights of this year’s contest. But so too was seeing a few hundred students – from a school with only a few more than 400 – filling the stands to support their boys basketball team from tip-off through the final buzzer.

Why we’re fans: If we’ve learned nothing else from two trips to Boyne City, it’s this – the togetherness and support showed by this student body is absolutely authentic and genuine. What student leaders have accomplished over just a few years is truly amazing, and not at all an act – the Rambler Rowdies love being there and having a blast, down to the band members who asked if they could be part of the cheering section instead of playing during basketball games this season. We’ll surely use as a teachable moment the way the Rambler Rowdies’ leaders took their show on the road to teach younger students in their community how to cheer with the high schoolers. Outstanding seniors who have played a big part are graduating, so we’re eager to see what’s next – but we have a feeling the section will be in great hands.

What we saw: This also was the second straight year we visited Petoskey, and this section again prides itself on cheering for its teams and doing whatever it can to will them to be successful. The Blue Crew is loud – and on the night we visited, this was especially impressive because while the stands were packed for boys basketball, another section of students cheered on the hockey team during a cancer benefit game in honor of a classmate. (That effort wasn’t lost on the basketball fans – they did a fundraiser at their game as well to contribute.) The Blue Crew played out its safari theme to the fullest, and arguably no section in Michigan this year is playing the theme game at a higher level. There’s no question it’s a lot of fun to be part of this section and the fun it comes up with throughout the year.

Why we’re fans: There is a great sense of community surrounding Petoskey athletics, and a lot of it stems from the Blue Crew and the wide variety of leaders who have brought this section roaring back over the last two years. We meet with section leaders before game time during our finalists visits, and the last two years Petoskey’s “crew” has included representatives with ties to a variety of sports and other extracurricular and social groups within the school who come together for common good. New this year was a “rules and guidelines sheet” to guide the leadership as it made decisions, and that will get passed on as new leaders already are being identified. This section truly has been student-built from the ground up, and we can’t say enough about how that work impressed us again. 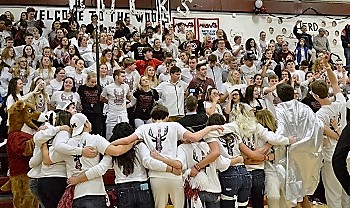 What we saw: A lot of what we expected after three previous stops in “The Woods” – a large group of students occupying one full corner of the gym, chanting and singing and dancing and having just a great time. But hearing leaders tell us beforehand of the section’s “renaissance” this school year gave us a clearer picture of just how much The Herd continues to be immersed in the Buchanan community as a whole – and how the section has hit another new level in 2017-18.

Why we’re fans: Student cheering sections exist to cheer on school teams, and at its most fundamental The Herd provides a ton of support for a variety of Buchanan sports in the fall and winter (and with plans to do so for the first time this spring). But student cheering sections can exist to create so much more as well – and the teary eyes we saw at the end of last week’s visit told some of that story. Unity among grades, among social groups and among students who may have little other reason to spend time together is an incredible thing to behold – and from The Herd’s lip dub application video through its stories of helping new students find a home at the school and others make friends through the student section that they’d never met before … well, we can understand why they tell everyone “there’s not place we’d rather be.”

"We created something from what was created in years past, and made it something we're all part of," Lee said. "Putting all of our heart into something, seeing it become something so amazing ... of course we're going to support (our teams) through every season; we're going to the girls (basketball) game tonight, soccer season and baseball season. But it's just something that was really special for all of us.

"Of course it's my senior year. But the fact that we won something we've been doing my whole time in the high school and being a leader of it finally ... that's so big to me. You have no idea what this means to our whole town and community."

Check out below our stories and videos behind the finalists. Also, click to see student-produced videos from all sections that entered the contest. (Photos courtesy of the Buchanan yearbook staff.)

Read all about it: Boyne City Wants You to Get Rowdy

Read all about it: No Place Buchanan's Herd Would Rather Be

Read all about it: Revived Blue Crew Continues to Thrive