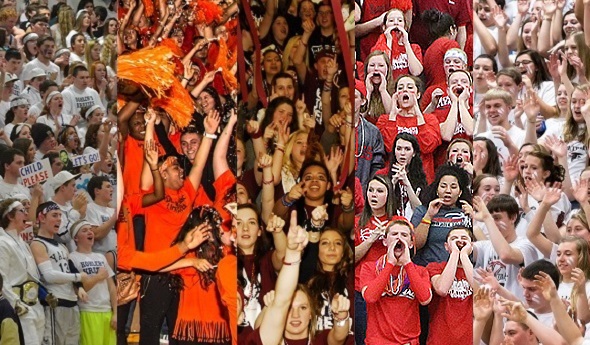 We watched and enjoyed what hopefuls sent us from all over the state, then criss-crossed Michigan to see this season's best for ourselves.

And now it's your turn to vote for your favorite student cheering section of this season's Battle of the Fans IV.

But before you do, take a few minutes to watch all five videos and read the stories behind the sections by clicking the links below.

The contest is sponsored by the MHSAA Student Advisory Council, which will have the final vote on the champion. SAC members will use all resources available to make their decision – including giving significant weight to the public social media vote. Votes will be valued proportionate to the size of the school receiving them (for example, one vote for Class C Beaverton will mean more than one vote for much larger Class A St. Johns).

The champion will be announced Friday on Second Half. Video of all five finalists will be compiled and shown on the main scoreboard during the Girls and Boys Basketball Finals in March at Michigan State's Breslin Student Events Center. The winner will be invited to Breslin on March 27 for the Class B Boys Basketball Semifinals and presented a championship banner at center court.

And now, the finalists, in alphabetical order:

Read all about it: Creatures Build Beaverton Legacy

Read all about it: Buchanan’s ‘Herd’ Grows into More

Read all about it: Dowagiac Unites to Launch ‘Attack’

Read all about it: St. Johns Cheers Section Success

Read all about it: Yale Kohler Krazies Rise to Roar