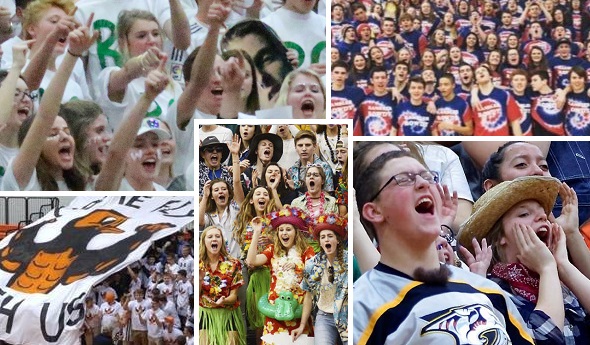 Last year’s champion is back. So is the first to hoist a Battle of the Fans banner.

And sticking with the familiar, two more past contenders are looking to take the final step and be named Michigan’s best high school student cheering section.

But watch out as well for a first-timer that has broken into the mix – and will host the first stop on this winter’s finalists tour.

Battle of the Fans VI, organized by MHSAA staff and its 16-member Student Advisory Council, will reward the cheering section that best creates the positive and festive atmosphere made possible when students show enthusiasm, togetherness and sportsmanship while rooting for their team. MHSAA staff and Student Advisory Council members will visit all five finalists for home boys basketball games during the second half of this regular season, with coverage and video from those visits and the announcement of the winner all to be published on Second Half.

Schools were invited in December to submit short videos, via YouTube, of their cheering sections in action. The winner will be announced Feb. 17, and video of all five sections will be played on the Breslin Center HD scoreboard during the Girls and Boys Basketball Finals in March. The champion and finalists also will be recognized during the Boys Semifinals on March 24.

This year’s group of finalists is mostly a mix of familiar contenders with a new hopeful joining in. Reigning champion Traverse City West is a finalist for the third time, as is Frankenmuth – the champion of the inaugural Battle of the Fans in 2012. Charlotte and Petoskey are finalists for the second time, while Boyne City is making its debut among the top five.

Although no Class D schools applied this year, the 24 entries were spread almost evenly over the other three classes – seven from Class A, nine from Class B and eight from Class C. Seven schools got at least one first-place vote and 16 received at least one top-five vote from members of the Student Advisory Council.

“We were thrilled to have our second-largest group of applicants in BOTF history, and we’re eager to visit some familiar stops and check out a new section as well,” said Andy Frushour, MHSAA director of brand management and advisor to the Student Advisory Council. “Traverse City West created some incredible momentum last year, and Charlotte just missed earning the championship. Frankenmuth and Petoskey bring years of tradition back to this contest, and Boyne City should be another fantastic addition while adding to the strong student section presence from northern Michigan.”

The finalists were chosen by the Student Advisory Council, and the winner will be selected by another Advisory Council vote based in part on activity on the MHSAA’s social media sites. All social media postings regarding Battle of the Fans VI should include the hashtag #BOTF. The MHSAA will post throughout the finalists tour on its Facebook, Twitter and Instagram sites and Snapchat feed.

This year’s applicants brought the total number of schools that have entered the contest at least once to 84, with Ann Arbor Gabriel Richard – a finalist in 2013 – the only school to apply all six years.

The contest is sponsored in part by the United Dairy Industry of Michigan, which promotes Michigan's locally-produced dairy products and nutrition education. Rules plus links to past years’ coverage of the contest can be found on the BOTF page of the MHSAA website.