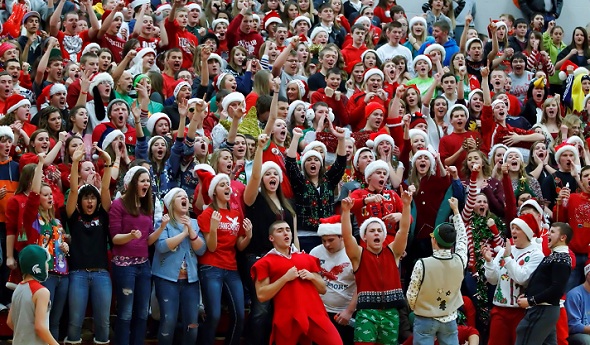 FRANKENMUTH -- Doyle Webb and his cousin were in Florida for spring break last April, walking to the beach, when they met a couple of girls.

They struck up some small talk, and Webb described his little German hometown known in part for its giant Christmas store that celebrates the holiday 361 days a year.

Not overwhelmingly impressed, perhaps, the girls “asked if there was anything else cool to do in our town,” Webb said.

So he pulled out his phone, pulled up a video of Frankenmuth High’s student cheering section in action, and “blew their minds.”

Webb has dialed up that YouTube clip more times than he can count over the last year since Frankenmuth won the MHSAA’s inaugural Battle of the Fans contest. Friends, family, complete strangers – he’s proudly shown it off to them all.

“People ask me what my winter sport is, and I say I lead the student section for basketball. They’re like, ‘Good for you,’” Webb said, imitating their light sarcasm.

This year already has provided a few more highlights to add to the reel. Frankenmuth again is among the five vying for this season’s Battle of the Fans II championship, and Friday was the first stop on this year’s MHSAA finalist tour. Buchanan is up next, followed by Vandercook Lake, Ann Arbor Gabriel Richard and Zeeland East before the winner is announced Feb. 22.

For the Eagles, much of the championship story remains the same as last year – but with a few new chapters.

If three years ago was the section’s opening act and last year its defining performance, this year has been about not just an encore, but establishing a legacy and making participation in the cheering section a regular part of student life. 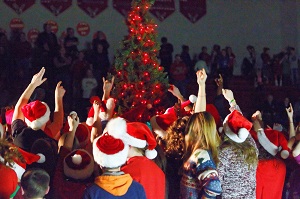 Of the school’s 507 students, roughly 70 percent participate in athletics. More than 250 – including a few rows of middle schoolers who have been recruited by the new section leaders – filled a large section of the gym for Friday’s game. “If you’re actively involved in an extracurricular activity,” Webb said, “the chances are you’re going to be actively involved in the student section.”

The buzz from last year’s BOTF title stayed hot into the summer, when it was replaced by discussions about what the section could do to up its game for 2012-13. The majority of last year’s leaders graduated last spring. But a group of athletes – Webb and seniors Blaine Malochleb and Ian Fischer, with a big assist from junior Katie DeGrace – began soliciting ideas from their classmates as soon as this school year got rolling. Last year’s leaders gave their blessing and a boost of support.

“They told me to not let them down, to keep the tradition. So we just found a good group of guys and tried to organize everything,” Fischer said of conversations with those new alums.

The challenge this year has been keeping the repertoire fresh. Frankenmuth won last year’s “Battle” in part because of the fun, festive atmosphere from the opening tip until the final buzzer, and there again was plenty of singing and dancing during Friday’s “Christmas Night,” which originally was scheduled for a game just before the holiday break but always is relevant in a town known for its holiday spirit.

When Frankenmuth’s players came out for pre-game warm-ups, they  were presented by the cheering section with two Christmas-wrapped basketballs. Webb passed out candy canes to passers-by, and tree lights hung from the gym balcony and bleacher railing. There were Santa hats and Christmas carols, the section’s traditional German chants and self-deprecating cheers like chanting “in our faces” when a Frankenmuth player’s shot was blocked.

“Essentially, it’s what we did last year,” Fischer said. “We set a new standard last year, as the best section in the state, and we had to up that this year.”

But halftime was the defining moment of this BOTF visit, a celebration, Malochleb said, “that I don’t think people have really seen before.”

After leading the section in some waves, spins and other moves, Fischer split the section, and Malochleb and senior Logan Gatza pretended to cut down a Christmas tree planted in the middle of the bleachers and carried it to center court. The gym went dark, the tree’s lights were turned on, and students emptied onto the floor for a verse of “Silent Night” followed by a quick dance party.

For Frankenmuth, it’s still about having a good time and representing the school and town – but also that “Battle” championship banner hanging on the gym wall.

“We used to see stuff like student sections trying to get in (opponents’) faces, get in their heads, mostly negative stuff,” Webb said. “Last year changed that with the emphasis of positive cheering from the MHSAA and the (BOTF) contest, and I think we really picked up on that. That’s changed a lot.