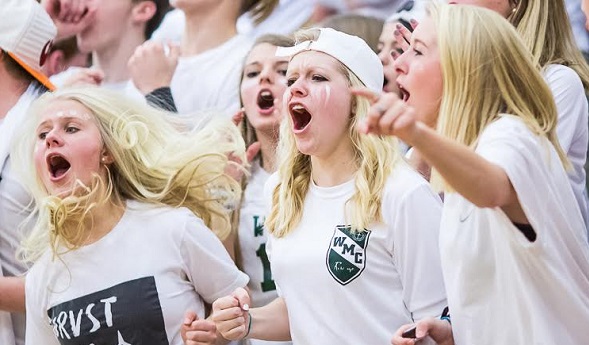 MUSKEGON – Lots of cheering. Lots of smiles. Everyone in beach gear and standing for a girls basketball game – flippers and all.

The first revving of Western Michigan Christian’s “Green Machine” this winter won’t soon be forgotten by leaders charged this fall with organizing the few hundred students who now regularly fill a corner of the Warriors’ gym to cheer on their classmates.

“It was like, ‘Whoa,’” senior Christopher Visser remembered of that first game together. Freshman Tyler Somers left with an impression that “we can do this.”

“It gave us a lot of confidence,” senior Lily Vander Molen said during Saturday’s Battle of the Fans finalists visit. “Like wow, this is our first try. Look at the great response we’ve gotten. It made me really proud of our school.”

The first four years of Battle of the Fans have uncovered common strategies for nurturing a strong student cheering section. Still, there isn’t a book explaining how to get one started.

WMC’s “mechanics” came up with a blueprint that over a few months has organized an already-enthusiastic student body of nearly 300 and made it a model for student sections statewide.

Western Michigan Christian was the second stop on this year’s BOTF finalists tour, which began with a trip to Yale on Jan. 15 and will continue with visits to Traverse City West, Munising and Charlotte over the next three weeks leading up to the naming of this year’s champion Feb. 19. The public may vote for its favorite on the MHSAA’s Facebook, Twitter and Instagram sites beginning Feb. 16, with the MHSAA Student Advisory Council taking that vote into consideration when selecting the champion after that vote has concluded.

Here’s how the Green Machine joined the party:

The scene was set for success with a student body that admittedly feels bonded, both by its small size and shared faith. Students at least recognize the rest of their classmates and meet for all-school chapel services weekly – and like most schools with an organized student section, attended games together in the past but en masse only for the big ones.

Athletic director Josh Glerum got the ball rolling at first this fall, showing senior Nathan Landheer the video from last year’s visit to eventual Battle of the Fans champion Dowagiac. Still, the small group of leaders who attended the MHSAA’s Sportsmanship Summit on Nov. 16 in Kalamazoo didn’t really understand what they were getting into even as they were making the trip. 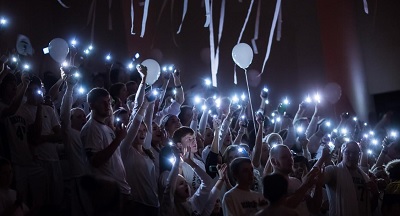 The Summit’s message of positive sportsmanship – and emphasis on Battle of the Fans – sunk in quickly.

“We've always had a really cool student-based student section, just a really cool environment. We've always had this really cool spirit,” junior Kaitlyn Van Hekken said. “Everyone wants to come out and cheer people on. After (the Summit), we were like, this is something that we can do. Let's expand on this, because we already have all the people for it.”

The three leaders came back and started to spread the message. They first met as “mechanics” – Glerum selected the representatives, including Landheer, Vander Molen, Visser, senior Maddy Heffron, Van Hekken and junior Dorie Bekins, sophomore Natalie Van Houwelingen and freshmen Somers and Sarah Moorhead – the Tuesday after the Summit and began hatching the plan.

They would work to have big crowds for Friday night home games – WMC parties students would look forward to all week. And they would point toward Battle of the Fans as the drive for participation.

“I love getting crazy, and I'm also a really competitive person. So if you're going to put me in a competition where all I have to do is get crazier than the other people, I will win that competition,” Visser said.

“We just know this school is super close, together. So basically it was just like, hey, let's go get all of our friends and do this thing.”

Communication had to be a focus – first to tell classmates there would be a student section, then to explain how the section would work.

And it needed a name.

Mechanics decided the key would be big turnouts immediately for the opening games for both the girls (Dec. 1) and boys basketball (Dec. 8) teams. They started planning themes for those games and preparing a list of cheers. They came up with contests for best costume for theme nights and games for students to play during halftime.

The mechanics took all of it to the student body during a pep assembly where each mechanic dressed up for a different theme, explained Battle of the Fans, what they learned at the Summit and showed the Dowagiac video to the entire school.

“I don’t know if we knew how to do anything,” Van Hekken said. “We’re like, maybe a pep assembly would work. We had an idea. Let’s just try a pep assembly, see how it goes. The response was overwhelmingly good.” 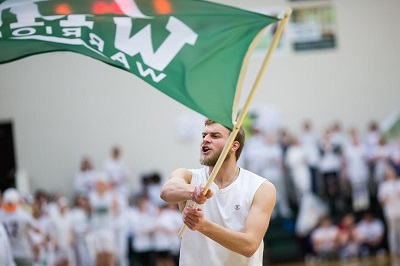 They circled that girls opener as a “Beach Night” and hoped for the best.

The best continues to get better.

For Saturday’s girls and boys games against Spring Lake, nearly 180 students filled one set of stands, with a sizable pep band filling the adjacent corner and a group of middle schoolers then packing half the baseline stands on the other side. WMC has four feeder middle schools, and mechanics have made sure to include those students to get them to not only participate this year, but take up the mission for years to come.

The cheers aren’t much different than what students have done in the past, but the intensity and participation are different, Landheer said. Students load into spirit buses for away games when available, rushing to the school office to reserve seats.

And the bond already present has grown tighter, with the Green Machine another way for a close-knit student community to feel even more inclusive.

“The coaches came up to me afterward (the first night) and said this is the best the girls have ever played; ‘Thank you for starting to lead the student the right way.’ That was my encouragement to keep going with these,” Landheer said.

“Even if you’re not involved in the sport of basketball, you can still come out on Friday nights and feel part of the team. We create a team on the court and a team in the stands, (and) we work together.”