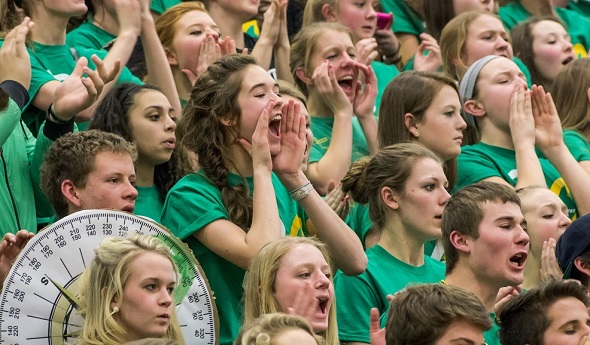 A hockey game in Trenton took those 25 players out of the cheering section, with 50 more performing a play and 25 playing a jazz concert. Still, by Friday’s fourth quarter, at least a few from those other events trickled into the gym to finish the night with their green-clad classmates.

No one expects someone to skip another school activity to join the Creatures. Those who have to work on game nights are exempt, and having a lot of homework also is excusable.

Otherwise, showing up, like most of the student section’s rules, simply is part of an unwritten code – like going to class or eating lunch. It goes along with being a part of Traverse City West, the fourth stop on this season’s MHSAA Battle of the Fans tour.

“People don’t think of it as we have a better student section than other people; oh, our student section is the best of the best, the loudest, this and this and this,” West senior Brian Jean said. “Really, I just think it’s a way of life around here. We just ... go. That’s just what we do.”

Traverse City West was the second-to-last stop on this year’s Battle of the Fans III tour. MHSAA staff and Student Advisory Council members will finish at Beaverton on Friday and already have visited Buchanan, Bridgman and Frankfort. Public voting on the MHSAA’s Facebook, Twitter and Instagram sites will take place Feb. 18-20, with the Student Advisory Council taking that vote into consideration when selecting the champion.

The winner will be announced on Second Half on Feb. 21 and honored with a championship banner during the Boys Basketball Semifinals on March 21 at Michigan State University’s Breslin Center.

Traverse City West is by far the largest of this year’s BOTF finalists. But it also has one of the most established student section traditions of any finalist during the contest’s three-year run – and it’s a history current leaders proudly recall with detail.

The school, born in 1997 when the former Traverse City High split into West and Central, is young by relative standards. A student body of just more than 1,600 students is represented in part by a 45-member student senate, which among other duties organizes the Bleacher Creatures, publicizes game nights and generally works to build school spirit.

Current senior leaders were in fourth grade in 2006. But they are able to rattle off that the section in its official form with its Bucket Brigade leaders was started by a student named Chase O’Black, who actually has a “titan spirit scholarship” named after him that is available to one Traverse City West boy and girl each spring.

“In middle school you used to walk around the football field with your friends,” senior Kelsey Boudjalis said, “and you always saw the high schoolers and said, ‘I can’t wait to be like that.’” 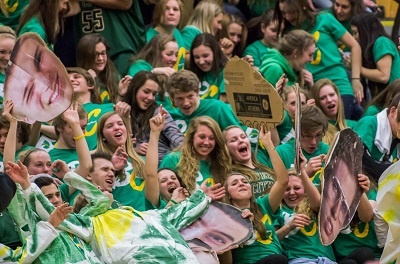 The student senate provides the Bleacher Creatures an official mechanism made up of athletes from a number of sports plus others who participate in theater, Model United Nations and a host of other non-sports activities. With input from such a variety of social groups, the section represents a “melting pot” of the school on a larger scale, senior Charlie Clark said.

Start with the Bucket Brigade. Although not officially designated by the student senate as the leaders, the four seniors who dress in paint suits and bang plastic 5-gallon buckets (but only at outdoor events) are the unwritten ring masters of the Creatures, with Brigade responsibilities handed down year by year. This year’s brigade is comprised of four senate members including school governor Brady Severt.

If the Brigade gets things rolling, tradition drives the rest. Doors for football games open at 5:30 p.m., and Creatures are waiting. The section can swell to nearly 1,000 students for Homecoming or a big game against rival Traverse City Central, but like at many schools it’s an another unspoken rule that students start at the top as freshmen and gradually move forward to the front (unless they have older friends to hang with or a sweet bunny suit like Severt wore a few times as an underclassmen).

Of course, the Creatures have themes: Green Screen in West’s version of a White Out, although the Creatures like White Outs as well and combine them with Toga Nights. Wild, Wild West is a Homecoming tradition going back nearly to the start, and a neat latest addition is the Patriot Game – during which West wears red or blue and rival Traverse City Central wears the opposite, and together they raise money for area veterans organizations.

There’s music too: The band jams an adjacent section during football games, with a drum line filling the breaks for indoor events. And the Creatures love fan buses, drumming up enough interest to set up two for soccer and one for a football game this fall, plus another for the West/Central hockey game Dec. 18 at Comerica Park in Detroit.

Getting word out to more than 1,600 students is a little different than for the other BOTF contenders half and a quarter of West’s size, for obvious reasons. But the senate incorporates a few strategies in addition to the usual social media blasts and school announcements:

Keeping 300-400 students doing the same cheers is another task of some doing given the size of the group. But because the Creatures use a mix of new and old, there’s uniformity regardless of which leaders are leading crews at games that often are being played simultaneously. The cheers always are the same, allowing everyone the opportunity to participate and athletes on every team – even bowling teams – to enjoy the support.

“It gives the team something to play for instead of just the school. When they’re looking into the stands and seeing the entire student body there, it’s like, ‘Wow, everyone really cares about the outcome of this game,’” Clark said.

“As an athlete,” senior Hunter Lumsden added,” playing in front of a big student section makes you want to play a lot harder.”

The one debatable point is how the section became the Bleacher Creatures. Does it go back to a zombie theme night? Was it in response to Central having its Superfans? “It goes too far back for the books,” Severt quipped.

But tradition doesn’t graduate. Jean said past Bucket Brigaders he followed at a distance as an underclassmen approached him while home from college this fall to shake his hand and impart congrats and encouragement.

There’s pride in seeing the section continuing in the “right direction,” Clark said. And that right direction means being known as the best in the northern Lower Peninsula.

“I feel like the student section is a big family. The part of the high school seniors before us was to show us how to (cheer),” Jean said. “Now we’re showing the younger generation, if you will, how it’s done.”

“When I look back at high school, it’s definitely going to be one of the things I’ll remember,” Boudjalis added. “I want other kids to feel that way too.”